Home Internet What Happens When a Regular Cat Becomes an Influencer Cat? 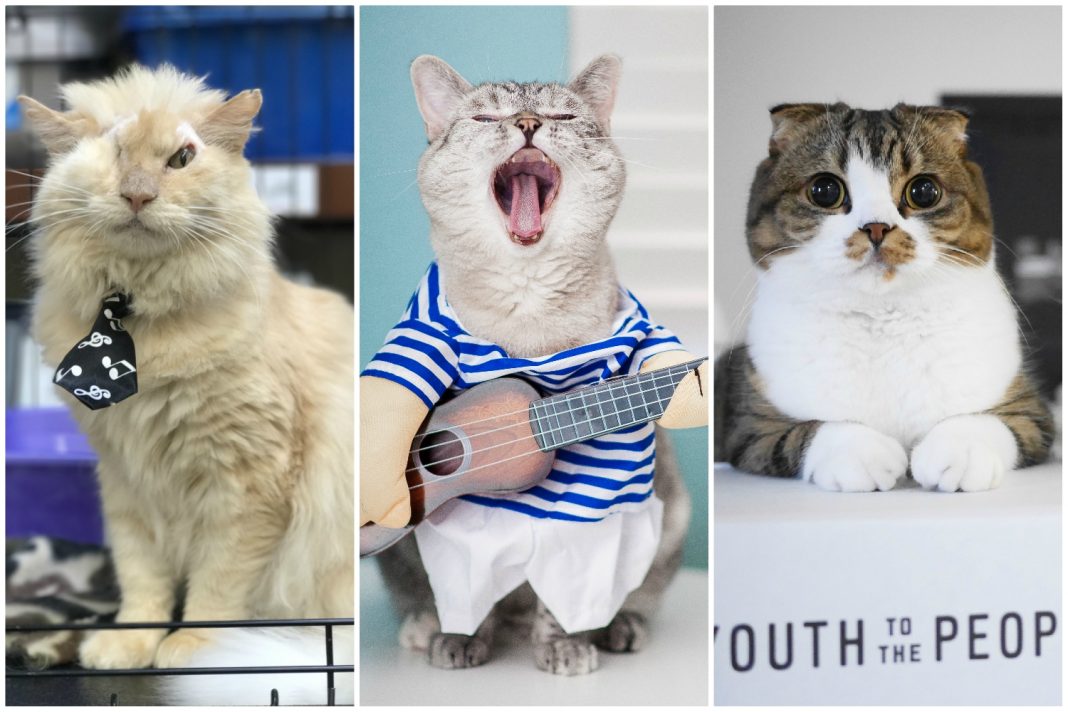 CatCon returns for a fifth year this weekend, bringing cat cosplay, panels on cat care, and cat adoption events to the Pasadena Convention Center. The big draw, though? Meet-and-greets with over a dozen feline influencers, made famous mostly by Instagram. But what’s it like to be (or own) a cat that’s a social media star? We talked to the humans behind four local cat influencers appearing at CatCon—Pookie Methachittiphan and Shannon Ellis, owners of Nala Cat; Michele Hoffman, owner of Sir Thomas Trueheart and Daisy; and Jamie Somphanthabansouk, owner of Super Hiro Cat—and they gave five pieces of advice for future cat stars.

Many of today’s most famous cats got big by accident or luck. Though Nala Cat holds the Guinness World Record for cat with most Instagram followers (4 million and counting), Pookie Methachittiphan originally created the cat’s Instagram account for friends and family. “Pookie’s family is in Thailand, so creating an Instagram in 2012 just made sense, not to build a persona, but to just share photos,” says Methachittiphan’s wife, Shannon Ellis. However, other people started discovering Nala’s account and the followers kept coming. “We realized she was a star when people started asking if we had any T-shirts or merchandizing. That was in 2013,” says Methachittiphan.

Of course, before seeking stardom, check in with your cat first. “If you feel your cat might just be an Instagram star, I’d say the most important thing is to love and respect your cat—have a conversation with them about it first…just kidding, maybe,” says Jamie Somphanthabansouk, whose cats Super Hiro Cat and Maccha Cat both have over 300-thousand Instagram followers.

Use your platform for good

Three years ago, Michele Hoffman, president of Milo’s Sanctuary in Antelope Valley, was told about a cat that had been the victim of an acid attack. After helping the cat through surgeries and the loss of an eye, Hoffman adopted him and named him Sir Thomas Trueheart. As people discovered Sir Thomas’ Instagram profile, Hoffman decided the account should stand for something. “He has become a spokescat against neglect, abuse and bullying against humans and animals,” says Hoffman. Now, Sir Thomas, his one-eyed girlfriend Daisy, and the other special-needs cats at Milo’s Sanctuary show that cats who’ve overcome adversity and abuse can still lead fulfilling and camera-ready lives.

Similarly, when a star cat gets sick, they can help raise awareness of feline health issues. “Hiro got sick last year and we chose to talk about it and share it because sometimes people don’t know what to do when cats can get sick. He had urinary stones, so we talked to the community about that, and people responded with warmth and advice,” says Somphanthabansouk.

Interact with the community

Most members of the cat-influencer community know each other, are friends, and are very supportive of each other’s successes. “We’ve been really fortunate to meet a lot of great people [behind other cat accounts] and have become friends with them. We’ll help each other out, like if there’s a brand that’s looking to promote a new good pet product, we’ll let each other know,” says Somphanthabansouk.

Since getting celeb-cat schedules coordinated can be as difficult as, well, herding cats, they often only really get together offline at events like CatCon. “The biggest thing for me personally at CatCon is connecting with our followers and supporters, doing reach out to people who don’t know about us and seeing old friends and making new friends,” says Hoffman, adding that last year a woman and her daughter came all the way to Italy to meet Sir Thomas Trueheart. When cat-influencers take photos together, it’s typically done during events like CatCon and even that can be minor challenge. “It’s hard to get photos where two cats are smiling,” says Ellis.

Some cats take to fame, while others are indifferent. “Nala loves business class. She knows she’s famous,” says Ellis. “When we go on a short trip and come home, she’ll stay in her bag and won’t come out because we weren’t gone long enough.” While Sir Thomas Trueheart doesn’t care that he’s famous, his notoriety has helped Hoffman’s work at Milo’s Sanctuary. “The rescue has grown because of his followers and we’ve brought awareness beyond my expectations to special needs cats through social media,” says Hoffman.

Of course, the cats can change their owners’ personal lives, as Nala’s owners can attest. “Pookie and I met through Nala. I was actually one of Nala’s biggest fans,” says Ellis. Ellis sent Nala a bowtie early on in her cat career and around the time Nala hit the 1-million follower mark, Methachittiphan started ordering merchandise from Ellis for Nala’s online store. The two women finally met when Ellis made an in-person delivery and they married a year later.

Keep it natural, but have fun with it

You never know when your cat might decide to be photogenic, so you should always be prepared. Thankfully, you don’t need any fancy equipment. “We point and shoot with our phones. We catch her in a good moment. We always try to show our audience exactly what it’s like to live with her,” says Ellis.

You shouldn’t pose your cats and should only give them costumes if they’re comfortable wearing them, but feel free to embellish on their personality and what they might be thinking. “What makes it fun is it’s kind of an outlet for my husband and I; we’re trying to communicate through our cats,” says Somphanthabansouk, who says Hiro is a deep thinker who’s “seen some things,” while Maccha likes to be sassy and gossip.

With all that said though, there’s no guarantee that fate will smile upon your cat’s dreams of stardom, but that’s not necessarily a bad thing. “Always remember, even if your cat doesn’t become an Instagram star that every cat is unique, magical and a star to those who love them!” says Hoffman.

CatCon is June 29-30 at the Pasadena Convention Center.

Best Things to Do in L.A. This Weekend