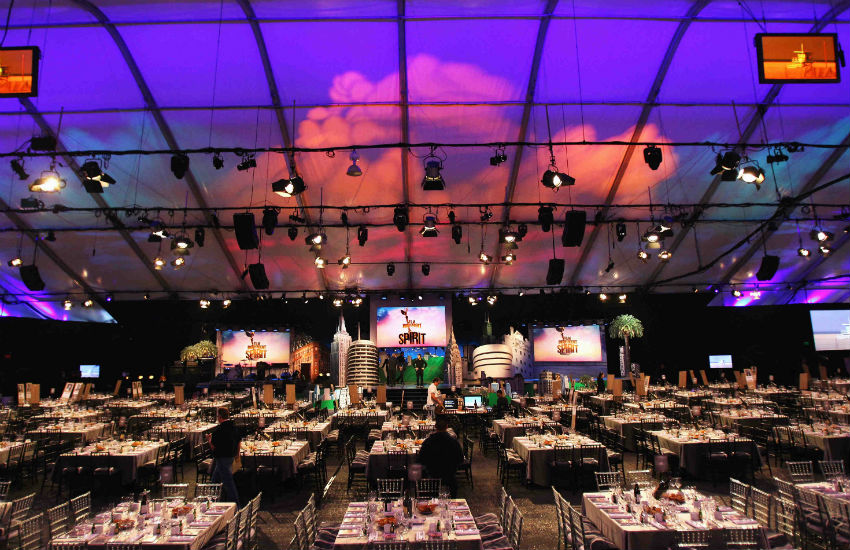 For some, the biggest award season event this February isn’t the one hosted by the Academy, but the Film Independent Spirit Awards, which hands out trophies the night before the Oscars ceremony. Founded in 1984, the Spirit Awards have always celebrated the work of independent filmmakers, but in recent years critics have observed that many contenders, while far from having blockbuster status, are hardly what many would define as independent (nominees this year include Boyhood, Birdman, Selma, and Whiplash). So how does the organization decide what does and doesn’t qualify as independent film work?

The official rules and regulations of the Spirit Awards set four guidelines for nominating committees to use when considering what to single out: “uniqueness of vision, original, provocative subject matter, economy of means (with particular attention paid to total production cost and individual compensation), and percentage of financing from independent sources.” In regards to how “big,” a film is, the rules utilize a rather simple qualification: “Cost of completed film, including post, should be less than $20 million. Any variations are at the sole discretion of the nominating committees and Film Independent.” But even “discretion” creates wiggle room.

For further insights, we reached out to Josh Welsh, president of Film Independent, about the awards and the shifting state of indie filmmaking.

This is the Spirit Awards’ 30th year. What do you think has changed since the awards debuted?
There’s been so much change within independent film over the years, but what has remained the common thread for us are films that display a uniqueness of vision. Films that have a distinct, authorial voice are at the heart of what we are looking for. People who are doing something that’s aesthetically new, that’s innovative, that has personality and voice. That artistic criteria is what is the most substantial, more so than when you get into stuff about ‘percentage of financing from independent sources.’

A lot of other things have changed. The studios have really abandoned the independent film sector when it comes to production and and distribution. They’re in the business of making big tentpole films, franchises, things like that. The moderately-budgeted dramas by acclaimed directors that the studios would have made 10-20 years ago are now the purview of the independent film world. That’s the big change. The mini-­major studios, with a couple of exceptions, are gone. ­And as a result, I think the indie film sector is now much larger.

At Film Independent, we’ve seen our membership growing dramatically. Over the last two years I think we’ve gone up more than 40 percent. That’s a testament to how many people want to be making independent films, or who are really excited by this space. They like watching independent films, they want to make them. It’s a rising, vital part of American cinema right now, despite all the economic challenges surrounding production and distribution.

What’s the nomination process like?
In the late summer, we open up for submissions. Individual filmmakers and studios and distributors send their films to us. We assemble nominating committees in the fall. They’re composed of many different people within the industry. Last year, we received over 340 films. These are the films that met our specifications; they were within our basic budget parameters and they had theatrical release or played the right festivals to qualify for 2014. So it’s a huge number of films we’re looking at.

The committees meet regularly over the fall, all the way up to when we announce the nominations, which is always around Thanksgiving. This is the most simple way to describe what they do, but they’re watching all of the films and having conversations about them. They’re talking about what they liked, what they responded to, what feels independent to them, which films have strong performances, which have strong scripts, all of the categories. Every year it’s going to be different, so it’s hard to give a simple answer.

How did the $20 million budget qualification rule come about?
In 1994, we nominated Woody Allen’s Bullets Over Broadway, which at the time had the biggest budget of any film we’d ever nominated. It cost something like $22 million. That caused the organization to want to set some figure we could use as a baseline. I believe it was the Board of Directors that came up with $20 million. They talked about the proper number a lot. And we always revisit it, too. We examine whether that number should stay where it is, or if it should go down, or even up. But for many years, that was our unofficial ceiling. It was put officially into the rules in 2006.

But it’s not a hard and fast rule?
No. It’s a very strong suggestion, ­but it was never set as a cap. We have on occasion gone above it. From the beginning, we’ve never wanted to set a firm dividing line between independent and non-independent. The $20 million mark is not an absolute. There’s the recommendation that the committees not consider films above that budget line. And that’s been the figure that we’ve adhered to for many years. But every once in a while, if there’s a film that is marginally above it, the committee is at liberty to put that in the group of nominations. We rely on their expertise and judgement. I think that the guidelines about vision and about original, provocative subject matter are the strongest ones. But economy of means and the percentage of independent financing is also very important.

You can have a film that was made for, say, three million dollars that was not made within an economy of means. It might have one above-the-line talent who got a huge salary to be in it, but the film itself doesn’t look very good or it was just poorly produced. Whether a movie has a big budget or small budget, it may or may not display an economy of means. We want to reward filmmakers who, whether they had ­a nickel or ten million dollars,­ were able to make the most ambitious, aesthetically remarkable film that they could using all the resources at their disposal. That’s something that committees, year after year, have to consider carefully. Were they sloppy with their money? Or did they stretch every dollar to make the best possible film that they could? To me, that’s a really important criteria.

The Spirit Awards have a few categories that expressly rule out most films that would have higher budgets. The award for Best First Feature. Best First Screenplay. The John Cassavetes Award. These are almost always the most exciting awards because they have nominees you’ll likely not see from most other industry awards.
Yes! To me, the most exciting things at the Spirit Awards are the discoveries, the people who were nominated for best first feature. If you go back and look at the nominations for that category, it’s an incredible roster of the most talented independent filmmakers, from Spike Lee to Spike Jonze. The sense of discovery with new directors breaking out is very exciting. That’s what we’re looking for with Best First Feature and Best First Screenplay. With the Cassavetes award, we’re definitely looking for people who know how to make a movie in the spirit of John Cassavetes. He truly knew how to work with limited resources to make something aesthetically audacious. Those awards are absolutely key to the spirit of the show.

Opening Night: Bullets Over Broadway at the Pantages