Home Technology Inching Ahead with Hyperloop 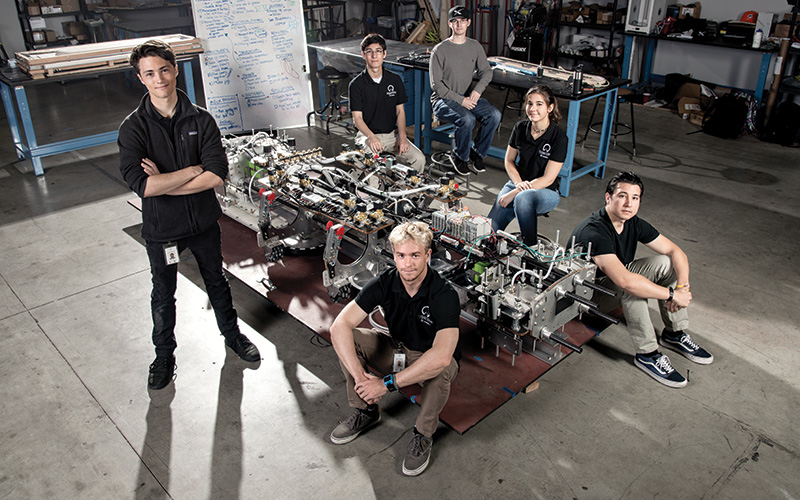 Traffic sucks more when it’s ironic. This is what I think on the clogged freeways en route to an office park near UC Irvine, where a team of undergrads is working on a cure for traffic and, in a way, for the problems of distance. In one corner of an empty warehouse, 23-year-old Patricio Guerrero Gertz shows me an artful assembly of valves, electronics, and metalwork. It’s a hyperloop pod designed to float on compressed air and brake with magnets that’ll amnesiate your phone. “This is kind of a little over-built, honestly,” he says. “But you have to do that when you’re going 230 miles per hour.” Guerrero Gertz put together his team, HyperXite, in 2015 to compete this month in a terrifying soapbox derby organized by SpaceX.

The hyperloop concept—using pods to shuttle people and cargo through near-airless tubes at up to 700 mph—came about because Los Angeles and San Francisco are just far enough apart to be a pain in the ass. Elon Musk, founder of SpaceX and Tesla, suggested it in 2013 as an alternative to high-speed rail between the cities. Occupied with other pursuits, though, he offered his ideas like a techno-industrial Johnny Appleseed, leading to the germination of two L.A. companies: Hyperloop Transportation Technologies and the better-funded Hyperloop One.

Hyperloop One’s headquarters is in an old factory complex in downtown’s Arts District, next to tough-looking graffitied warehouses that are attractive for movie shoots—the architectural equivalent of Danny Trejo. The campus is a typical engineer’s kludge: computer work stations next to tables of machine parts, vacuum chambers, and Bludso’s barbecue. Product engineer Gurneet Kaur points out that the hyperloop idea brings together several technologies: Magnetic levitation, linear motors, and air compressors already exist, but “the trick is getting them together and working at scale.”

The two-year-old company has been busy. In May it raised $80 million in funding and ran an open-air test at its facility north of Las Vegas. It recently settled a lawsuit brought by former employees against company execs involving allegations of mismanagement, pay-to-play dealings, and a noose. “We never talk about that anymore,” CEO Rob Lloyd tells me. “If anything, it’s made us stronger.”

Hyperloop One is focusing on recent partnerships with a Russian investment firm and the government of Dubai to study how to shuttle people between cities as well as cargo to and from the ports. “In an on-demand economy, the only thing that hasn’t kept up is the capacity of our land-based transportation systems,” says Lloyd. “They’re slower than ever. This is really the problem we’re solving.”

Hyperloop One has no plans to build the L.A.-to-S.F. human spitballer that  got Musk hot and bothered in the first place. That aside, the company is working with L.A.’s Arcturan Sustainable Cargo to study how a hyperloop system connecting the ports of Los Angeles and Long Beach would reduce the number of trucks on roads. It’s planning a test run of the whole system—pod, tube, and all—on its half-kilometer track sometime in the first quarter of the year, probably not long after SpaceX’s first Hyperloop Pod Competition.

While Musk is keeping his distance and not getting involved with either hyperloop company, or starting his own, he’s clearly still interested. His rocket firm built a test track at its Hawthorne HQ for the competition, in which the HyperXite team will face off against 29 other teams (all college based except for one organized on Reddit), their unmanned pods being judged on highest speed with safe deceleration. Some pods float above the rails using magnets; others rely on the tech that brought you air hockey. Considered favorites, Guerrero Gertz and his team designed a high-speed hovercraft that  can exceed 200 mph. Sponsors donate equipment, money, and other resources. In exchange their names will be plastered NASCAR-like all over the pod’s fuselage for its run at SpaceX. The winning team will receive a prize, and more important, the attention of the industry.

Though nobody at SpaceX will say so, that could be why the company is hosting—to get its eyes on designs and engineers, should it ever want to tackle intra-California travel after the easier Martian stuff. Postcompetition things may move fast. Guerrero Gertz or one of his classmates could soon be sucked away to work on some form of high-speed transport, Earth based or otherwise.