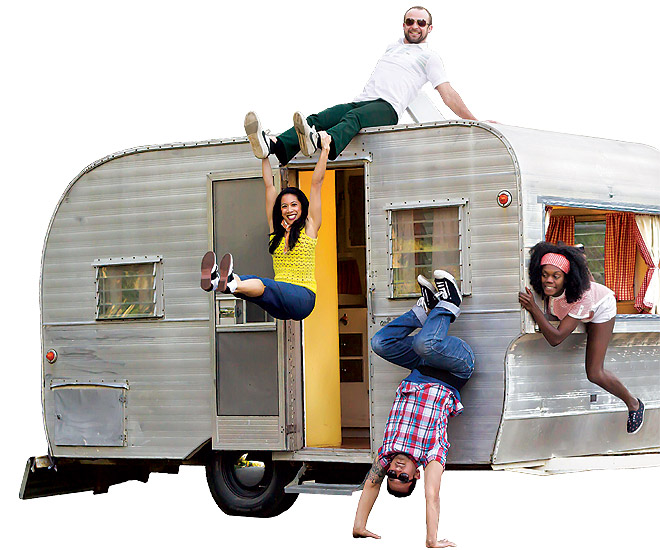 Since staging her first site–specific show in a Laundromat, Heidi Duckler and her eponymous troupe have spent 28 years bringing their performances—which incorporate ballet, break dancing, hula, martial arts, and just about every other type of movement—to all sorts of L.A. landmarks. “After I got my master’s degree from UCLA, I wanted to create a dance company that was anywhere except a dance studio,” the 60-year-old choreographer says. The locations, chosen for their cultural, architectural, or historic significance, range from the former Perino’s restaurant to the City Hall rotunda. Heidi Duckler Dance Theatre’s latest in situ experience, At the Oasis, finds the group cavorting in and around a 1961 silver Oasis travel trailer. This Saturday they’ll baptize the production in a Culver City parking lot before visiting locales around the city in the coming months, making a kinetic concept even more mobile.

Some L.A. sites where Duckler et al. have bent over backward
Laundromatinee
(1988)
Thrifty Wash, Santa Monica
The spectacle of dancers leaping in and out of coin-operated washing machines has been reprised dozens of times and is a favorite at local universities.

Mother Ditch
(1995)
L.A. River, Atwater Village
A thousand people showed up as a violinist played in a boat, a mountain climber scaled pylons, and a dune buggy revved its way along the banks.

SubVersions
(2000)
Subway Terminal Building, Downtown
The landmark structure was re-imagined as a body with air ducts as lungs, a circular room as the stomach, and a human guide as the brain.

Sleeping with the Ambassador
(2003)
Ambassador Hotel, Koreatown
Before the hotel was torn down, the empty swimming pool, Cocoanut Grove nightclub, and gift shop were used for an immersive event.

Cleopatra, CEO
(2012)
Paul Hastings Tower, Downtown
The corridors of power (the 51st floor was once the headquarters of Arco) were transformed into the Nile, complete with plastic alligators and hieroglyphics.