Home Uncategorized In Black and White 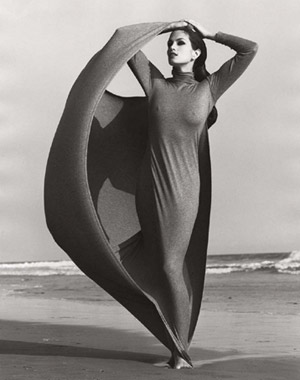 I circled the 100 N. block of La Brea Avenue four times on Thursday night. Once because I wasn’t really paying attention—a swarm of cops were pulling somebody over on the other side of the street—and three times more looking for parking. I was heading to the opening of Herb Ritts: Twenty-Five Years at the Fahey/Klein Gallery and, to my surprise, there wasn’t a valet.

Perhaps I shouldn’t have been surprised. Exhibition openings tend to be more about the artist than their art, but Herb Ritts passed away in 2002. The show was timed to the recent release of Herb Ritts: The Golden Hour, A Photographer’s Life and His World by Ritts’s colleague, Charles Churchward (the book’s release also explains the many tributes and retrospectives that popped up in this month’s fashion magazines).

I walked four dark blocks to the gallery quickly, trying to stay warm, but it was chilly inside, too. There, a subdued crowd in black leather jackets and crisp white shirts slowly milled about the gallery’s two rooms. The photographs on display are truly stunning: Cindy Crawford, Christy Turlington, Naomi Campell, Alek Wek. Many of them are nudes. All are black and white.

I caught photographer Alex Berliner coming in just as I was heading out, and I was so relieved to see a warmer face—and the color of his cherry vest—that I went in for a full hug instead of the standard kiss on the cheek before I knew what I was doing. “I used to shoot for him,” said Alex, wiping the lens of his iPhone’s camera with his sweater. “Herb was a really sweet guy.” “It doesn’t feel like an art opening,” I said. “You’re right,” he said. “It’s just one more reminder.”

Herb Ritts: Twenty-Five Years will be on display at Fahey/Klein Gallery until December 4.