Home Music Jenny Lewis Wants You to Try Her Wine 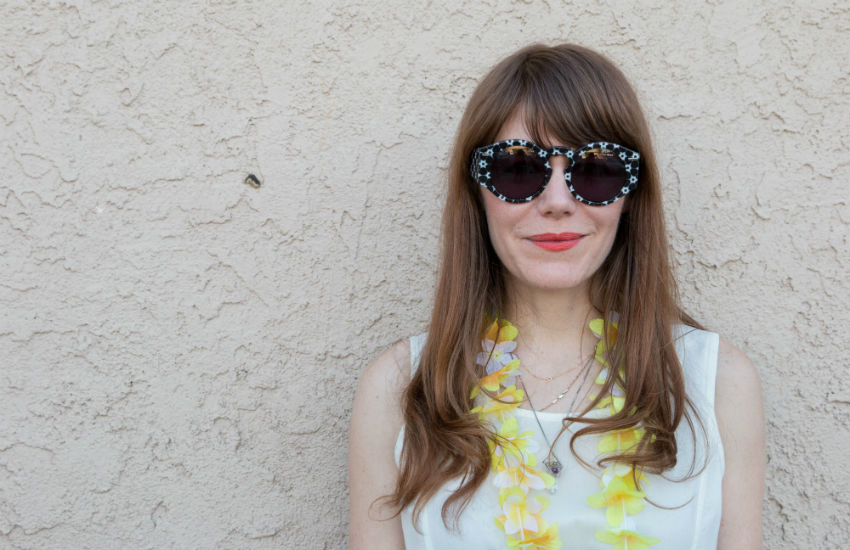 It’s late Saturday afternoon at a local Palm Springs mainstay, and Jenny Lewis, dressed in all white and chatting with a couple friends, is exactly where she wants to be. That is, until a video of her own performance on Jimmy Kimmel Live plays on the screens. “Make it stop,” she mouths with a smile.

A man puts colored leis around everyone’s necks and she picks up a glass of wine—her own wine, actually. We’re here to celebrate the first taste of this batch of Voyager, a natural wine developed in collaboration with Domaine LA and La Clarine farm. The first Voyager wine was released last summer, alongside Lewis’s critically-acclaimed third solo album, The Voyager. A brilliant marketing tie-in, sure, but the wine happens to be an aptly Californian extension of Lewis herself.

We talked with the singer-songwriter about her many appearances at Coachella, finding contentedness with her career, and taking advice from Lucille Ball.

In all those years, what’s been your oddest Coachella experience?
I guess handling Arcade Fire’s balls. There were hundreds of balls, actually, and I ended up backstage with my friend Jenny Eliscu. They wouldn’t let us back out into the crowd and they wouldn’t let us side stage and it was right before they were unleashing these giant LED balloons. And so we ended up having to corral the balloons and throw them out into the crowd. So me, Jenny, and Ezra from Vampire Weekend somehow ended up together throwing these giant balls into the crowd. It was one of the coolest experiences of my life. I mean just being among that many balls, first of all (laughs).

The Voyager is an excellent album. It seems to be the one that’s broken through. How has that changed things for you?
Well, I feel like with all the records I’ve made, it’s just been little baby steps since 2001. Every record hopefully reaches one more person. It really is linked to the very beginning and it feels just like an extension of the first song I ever wrote. But it’s amazing to be able to play the songs six months after the record came out, because things happen so quickly now that I’m lucky to have people pay attention beyond two weeks.

Do you look back at the material on your first solo album and feel like a different person?
I’ve felt the same since I was three. Truly. But my first solo record was something that I never thought I could do on my own. I only did because my friend Conor Oberst was starting a label and he asked me to make a solo record. I’d truly never considered making something outside the context of my band. So with this one, I was a fully formed artist on my own and I could make whatever I wanted to and it wasn’t happenstance. It was like “this is the record I want to make, this is who I wanted to make it with, and this is the story I want to tell.”

Growing up acting and transitioning to music, was it your goal to be in showbiz? How did your career path evolve?
I come from a long line of working-class showbiz people. My grandparents did Vaudeville. My parents had a lounge act in Las Vegas. It’s basically a way to not have a straight job. So I became an actor because someone needed to support my family when I was a little kid. It’s just been a part of our family tradition.

When did you start writing songs?
When I was 10, maybe?

So this is something you grew up with. You never thought, “I’m an actor, but I’m going to try out music.”
It’s just a hustle, man. I’m just on my hustle. And as an actor, you’re telling other peoples’ stories; as a writer, you’re telling your own. That’s what I wanted to do. I wanted to tell my weird little slice and find a little space for it.

At your Apogee Session a while back for KCRW you mentioned Ryan Adams made you listen to Creed while making The Voyager. Have you ever figured out why?
No! I don’t understand [Ryan’s] methods. But I think it worked to get me out my own head so that I could record my own music. You’d have to ask Ryan about that, but by the sixth song, it was so loud, it was blasting in the studio and I thought, “Oh wow, I get this.” I mean, I get all music. There’s nothing that I don’t really like, you know? If it’s real music, I like it. I like electronic music as well. If it’s coming from a couple of humans, I’ll listen to it no matter what it is.

What’s on the horizon? What do you want to do now?
Drink wine. (laughs)

Fair enough. What about in your music?
I’m doing it. I’m doing exactly what I want to do.

You and Johnathan Rice wrote all the music Johnny Flynn sings in the film Song One. What was it like writing for him? He has such a distinct voice.
He was so, so great. Johnathan and I wrote the songs and then we gave them to Johnny to interpret, and he did a really wonderful job. He was very respectful but brought his own vibe to it, which we really, really loved. We just like writing songs. If I can write for myself or for someone else, I’m totally down. I try to write every day.

Who would be your perfect main stage Coachella hologram to perform alongside?
Lucille Ball. She was my mentor. I was on a show with her called Life with Lucy when I was a little kid. She played my grandmother. She was very tough on me but taught me a lot of important things. She was stern and she wanted me to focus and she taught me a lot of great lessons that I still carry with me.

Who would be on your Coachella 2015 playlist?
I’m so bad at mixes. It’s not my forte. I’m more of an album person. I still listen to records.

What was the last full record you listened to?
To Pimp a Butterfly, Kendrick Lamar. Also Courtney Barnett. I do like compilations. I’ve been listening to this Thai compilation. It’s like ‘60s and ‘70s psychedelic Thai music called The Sound of Siam.

What’s the psychedelic scene in Thailand like?
It’s trippy, dude. It’s all riffing on American music but with Thai instruments and Thai lyrics. Check it out: Sound of Siam. I heard it at Pok Pok in New York. I listen to weird ass shit for the most part.