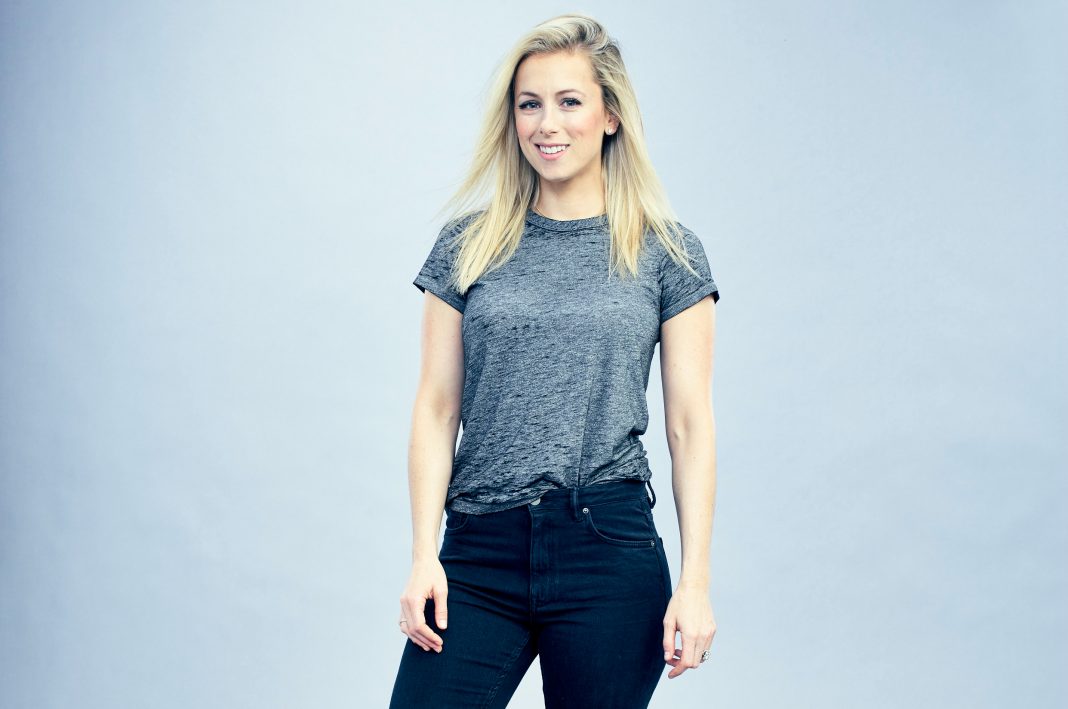 At 35 and recently married, L.A.-based comedian Iliza Shlesinger is ready to look back on the first phase of her adulthood–including some of the regrettable fads and fashions that defined her teens and early 20s–from a perspective of some wisdom and maturity.

Shlesinger arrived in Los Angeles right in the heyday of Ed Hardy and is just old enough to remember a time before all human interactions happened via smartphone. In her new Netflix special, Elder Millennial, she reflects on the awkwardness of the era and shares some of what she’s learned since those days, about matters of style, relationships, and society.

We spoke with her about her memories of some ridiculous Aughties trends and why having every relic of your youth just a click away might not be a great way to grow up.

How did you get started in comedy?

I was always funny. I was in improv and comedy troupes and, one day, I realized I could get my point across without an ensemble. I moved to L.A. and just sort of hit the ground running. There is something cool about not knowing what you’re supposed to be doing and just going blindly in a certain direction. And that’s how I got my start. I moved to Los Angeles when I was 21 and I started comedy when I was about 22.

Your special is in part about identifying as an “Elder Millennial.” What do you think are some of the defining characteristics of that particular cohort?

I’m 35, so around my age, give or take a couple years. It’s really about remembering certain things. Remembering things like Sidekicks. Remembering being old enough to get into clubs, but perhaps not being able to afford the cool clothing. Remembering when Ed Hardy was cool and velour jumpsuits and those Dior kidney purses. It was a time when everything was bejeweled and embroidered and silver and mismatched. Everyone was exposing their hip bones for no real reason.

You know, it was less about exploring one of the worst fashion eras of all time, and more about, at 35, doing a comedy special with some wisdom and perspective, having the confidence to tell it like it is, knowing that I’ve had age and experience and examples to back it up.

There’s this sort of ever-present nostalgia that people have for the ’90s, but I wasn’t really old enough for that. I was in my early 20s, late teens, in the early 2000s, so that was the time period I wanted to honor and discuss. Everybody thinks it’s about the ‘90s, but it’s really all about the 2000s.

Have you noticed a rise in nostalgia for the 2000s era?

People that are my age are just now coming into a place where nostalgia is starting to set in. It’s interesting because we are probably the first generation that has, for the most part, always had nostalgia at our fingertips. Of course, I remember not having the internet, but you know, your parents, when they wanted to see an old TV show or eat an old candy bar, it was a rarity for them. For us, anything you want that reminds you of growing up, is there on the internet or you can order it on Amazon.

I don’t think it’s good to have constant access to things you should be missing. We are supposed to grow apart and away from things in pop culture that formed us. If you never have a chance to miss it, I think it feels less special.

Do you remember how you felt about what was happening in fashion and culture at the time?

It’s interesting because it’s just now that the 2000s are coming back. I really wish that they weren’t coming back, because we all looked sweaty and shiny and mismatched. However, even at the time, I remember thinking, “Man, this stuff is hideous,” but also, “Man, I still want to be part of it.” That’s just part of being young and living in L.A.

At the time, I remember thinking, “Man, this stuff is hideous,” but also, “Man, I still want to be part of it.” That’s just part of being young and living in L.A.

I mean, there is no reason to pair fuzzy, warm Ugg boots with a denim skirt–and wear that to a nice evening out or on the red carpet. There is no reason why a triangle top made of silk should be a top that every woman, no matter how big their boobs are, should feel required to wear. As someone like that, I can tell you it’s uncomfortable and unrealistic.

As it pertains to L.A. specifically, I remember that I had two nightclub jobs here in L.A. At one, I got a job as the coat check girl, which is insane since no one is checking a coat in L.A. And then, I remember, I got a job at what was called Shelter. I was 23 and it was just your job to stand there and look cute, but I remember thinking, like, “Wow, I’m really in it! Look at all these hanging chain belts, and bedazzled trucker hats, and pink, fuzzy Kangol hats, and colored sunglasses. If only I could look that cool.” Square toed boots or really pointy toed heels. Really severely pointed high heels. “Oh, man, if only I could look like I had penguin fins sticking out of my embroidered boot cut jeans, then I would be winning.”

We gave you a couple photos pulled from the Los Angeles archives from the era. Do they bring any memories of regrettable 2000s trends to mind? 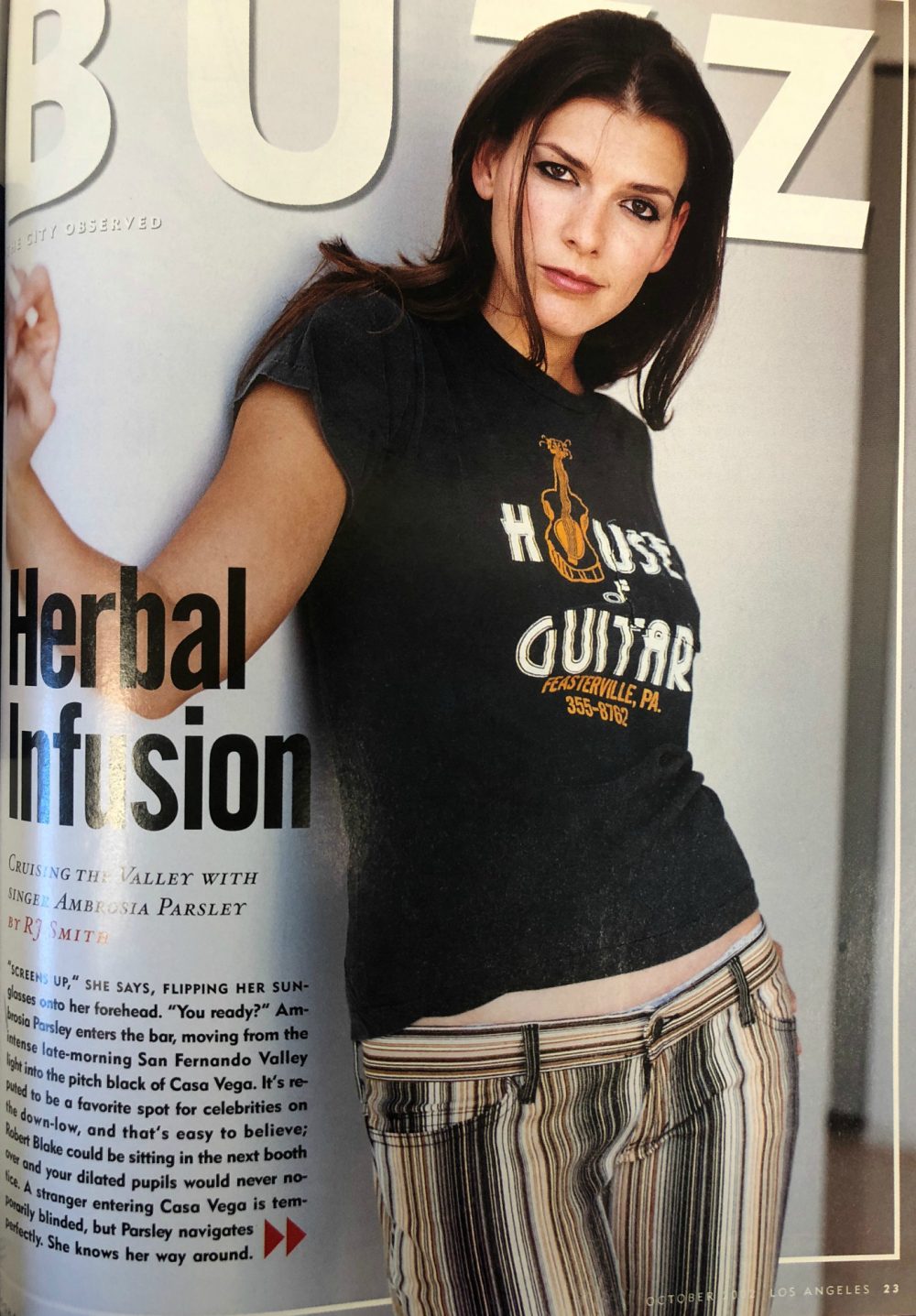 Left, Ambrosia Parsley, October 2002: The early 2000s was also a time that ushered in the “fake vintage” tee. Everything was about looking like you’ve had a life of gritty experience, but you bought it at Kitson for like $90. It’s like wanting to dabble on the “other side of the tracks” but not actually doing that. And if you look at her pants, those are very low rise—it was the time of the house of the low-rising pant—and, of course, the assumption was, everybody would be so “model thin” that they would be showing off that precious area between the pubic bone and hip bone. And the patterns on the pants! Hers are loud stripes. Snakeskin was also really in. Pleather. Like, the idea of being we’re all about showing off hideous prints and… the look was like, “we lure you in with the promise of seeing our flesh, but then it’s like, gotcha, look at my pants!” So terrible, so tight, so bootcut.

Right, Steve Harvey and the Black Eyed Peas, October 2004: This is a photo of Steve Harvey from 2004. Honestly, that could have been from yesterday. He has been wearing the same suits forever. Also in this photo: the hats. There has been no greater affront to fashion than the fuzzy Kangol bucket hat. It combines the comfort of your grandmother’s robe with the fashion of your grandfather’s fishing hat–but on your favorite hip-hop artist. It’s coming back. It was hideous then, and it’s hideous now.

Outside of fashion, do any other pop culture relics from the era that stick out in your memories from that time?

I remember iPod Nanos, all the generations and iterations of iPod, because I remember the idea of an mp3, the idea that music could be so small! And not skip every time you walked. I remember making the jump from a Treo, to a Blackberry, and eventually to an iPhone, which was something I didn’t do for a very long time. But I remember looking at my Treo and thinking, “This is the most sophisticated, advanced piece of equipment anyone has ever made.”

There has been no greater affront to fashion than the fuzzy Kangol bucket hat. It combines the comfort of your grandmother’s robe with the fashion of your grandfather’s fishing hat–but on the head of your favorite hip-hop artist.

I remember in high school having a Nokia, that little tiny brick cell phone, and how precious data was, how precious your minutes spent on the phone were. Now we talk and text with impunity, but at the time, only nights and weekends were free, and there was a premium on that.

Do you think that, these days, fashion and pop culture have evolved and become more inclusive?

I do think where we are now as a society is more inclusive and diverse. Every year we take more steps to be more open minded. In terms of trends and culture, I think you see a reflection of that. You know, the early 2000s and the ’90s to an extent… fashion in the ’90s were all about being thin, as thin as possible. The early 2000s were all about being as thin as possible with a fake tan. Now I think anything goes–make up, clothes, trends–there is something out there to make everyone feel included and attractive. Except boyfriend jeans, those remain reserved for models only and the rest of us just look like we threw on clothes for moving day.

Since you are married to a chef in L.A., maybe we could talk for a second about any favorite restaurants or places around town?

I could shamelessly plug his restaurant. He’s the executive chef of Bludso’s on La Brea. If you are from a state that does barbecue, go to Bludso’s and it will do you proud. I’m from Texas and, not to say that makes me an official barbecue expert, but it’s outstanding. We just went to a restaurant downtown called Bavel and that was outstanding. We had chef Jeremy Fox of Rustic Canyon do the food for our wedding; my husband co-wrote his cookbook. Rustic Canyon is luxurious and if you love vegetables being treated like people, practically, that is the place to go. Those would be my three shout-outs.

RELATED: Surprise! The Broad Has Added a Brand New Kusama Infinity Room to Its Collection