Home Uncategorized Iggy Azalea Gets “Fancy” with a Little Help from “Clueless” in Her... 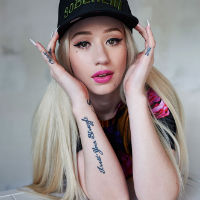 The voice of Australian-born Iggy Azalea (real name: Amethyst Kelly) is practically inescapable these days. Since releasing her breakthrough mixtape, Ignorant Art, which featured the controversial track “Pu$$y,” the rapper and former model has carefully curated a rap persona that people either love or love to hate.

Her debut album The New Classic, released on April 21, includes the single “Fancy,” which features a ridiculously catchy hook from British singer Charli XCX; you’ve probably heard the chorus line, “I’m so fancy,” blasting from a car speaker. The song showcases Azalea’s aptitude for fusing powerful pop hooks with Southern-style rap. In March, Azalea released the video for “Fancy,” a spot-on homage to the classic L.A. movie Clueless, which celebrates its 20th anniversary this year.

On Tuesday, May 6, the LA Film Fest will host a free screening of Clueless at Nokia Plaza. In honor of the movie that launched Alicia Silverstone’s career and taught us the snarkiest Valley Girl insults (“Do you prefer ‘fashion victim’ or ‘ensembly challenged?’”), check out “Fancy” and refresh your memory of all things fetch circa 1994. Here are our five favorite things about the video:

❶ The outfit selector Iggy browses through on her tablet in the first scene is a reference to the clunky computer Cher uses in Clueless, which undoubtedly seemed like a technical wonder in 1994. It’s a clever parallel and if you’re above the age of 23, guaranteed to make you feel old.

❷ We love the schoolyard panorama scene in Clueless, where the various factions that make up the high school microcosm are introduced. Check out the amazing ’90s styles repped in the yard. The “Fancy” analog is spot-on and Charli XCX, in particular, seems to be embodying Tai for most of the video.

❸ Christian, the mysterious and ultra cool-looking dude from Clueless who turns out to be gay, appears a couple of times in the video. He sits behind Iggy sporting sunglasses and an impeccably groomed pomp. He’s also spotted reading a copy of William S. Burroughs’s beat classic, Junky. Christian just might bes the OG hipster.

❹ One of the best scenes in Clueless is the “Freeway Freakout” scene, in which Cher’s best friend Dionne (played by Stacey Dash) takes a wrong turn and ends up on the freeway screaming all the way to the next exit. The “Fancy” video forgets one important detail: the old lady who flips off Cher and her friends as they careen in and out of lanes.

❺ The only thing missing from “Fancy” is Paul Rudd. As Josh, Cher’s snooty, intellectual stepbrother and eventual boyfriend, Rudd is the heart and soul of Clueless. Iggy didn’t see a need to incorporate a love interest in her video, which is fine, but we’ll still fondly remember a young Paul Rudd waiting for Cher in the final scene (“young Paul Rudd,” another phrase guaranteed to make you feel old).

Way Harsh, Tai: The Clueless Pop-Up Is Being Postponed