Home Uncategorized If You’ve Ever Wondered What a Comedy Central Roast of Nelson Mandela... 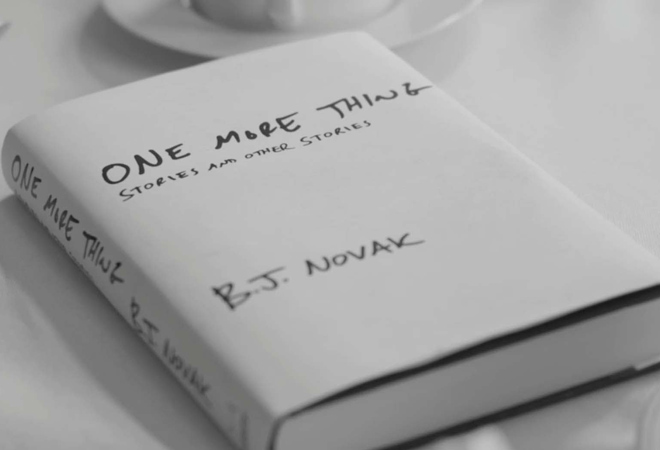 How do you edit your work if you’re a stand-up comedian writing a book of short stories? In front of a live audience, of course. In a nod to classic literary performers like Mark Twain, while B.J. Novak was working on his new book One More Thing: Stories and Other Stories (released February 4), he rented out the Upright Citizens Brigade to test out his stories on audiences, using their reactions to shape his final book.

The end product? A smart and funny collection of more than 50 stories that range from a couple of paragraphs to a couple of pages. Vengeance, self-doubt, and denial are touched on in these humorous stories about everything from sex robots to Justin Bieber.  We sat down with the Harvard grad to discuss his process and the inspiration for some of his ideas before his reading this Friday at Vromans Bookstore.

When you wrote for The Office it was a collaborative process and you got to see your words come to life onscreen. How different was it writing the book?
It’s been a way for me to figure out what my voice is independent of these other voices that are very close to mine but not exactly mine. On The Office I was in a room with people who were closer to my voice than anyone in the world—Mindy Kaling, Paul Lieberstein, Greg Daniels—and the show was very close to my voice. I really like writing things in that extremely realistic, subtle, observational way. I loved the collective voice but it wasn’t exactly mine because. No one else is exactly you. When the show ended I wanted to write something with no collaboration from anyone else, not even an actor or a director. That’s why I eventually chose this as the first thing I did after The Office. All those years in The Office I had this long list of all the screenplays I was going to write the second I got out, the TV shows I was going to create the second I got out. I never thought I would just hole up and write a book of fiction. I guess that’s what I needed.

Do you still have a place where you can test out your ideas and get feedback?
Yeah, that part of me is very much alive. I reserved the theater at the Upright Citizens Brigade about once a month once I started developing these stories so I could read them publicly, like I’m David Sedaris, and see which ones I should edit and which ones have the best rhythms. That became my #1 editing tool: the honest unshakable reactions of a captive audience.

There are over 50 short stories in this book and they cover a lot of different topics. How long have you been collecting these ideas?
I’ve had a lot on my mind, I guess. I’ve had most of these ideas for a long time and many came once I was already in that short story mode. Once I knew what my voice was, everything came to me as a short story.

I liked these stories because they’re completely unpredictable. My favorite was No One Goes to Heaven to see Dan Fogelberg, where the guy dies and goes to heaven but his grandmother doesn’t have time to see him. What sparked that?
A lot of these stories that seem so hypothetical are actually quite personal. That story, I think, is in some ways about my estimation of myself. As a standup comedian I will often find myself in Minneapolis, Milwaukee, Chicago. And I’m the biggest thing in town that night at a college campus or a theater. I’m funny and it’s all going great but a part of me knows that they’re only this excited about me because Steve Carell’s not here or Chris Rock’s not here or Richard Pryor’s not here. When you go further back you realize we’re all stars out of circumstance. The time and place in which we live is so limited, so finite. In the face of perfection, who is really a star? We’re all stars of circumstance, and I realized if I performed in heaven, no one would go see me because there are so many greater people to see. So that story started with a music scene in heaven where a perfectly good singer like John Denver or Dan Fogelberg or Roy Orbinson gets no one to attend because everyone’s at Beethoven and Sinatra and Elvis. That extends to real life too. Do you really see your grandmother when you’re in heaven or do you have better things to do? And does she really want to see you?

In one of the stories you imagine a Comedy Central roast of Nelson Mandela. You must have had so much fun writing it. Which of the stories did you have the most fun writing?
I had a lot of fun writing that one! I was excited to try to do justice to multiple sides. I watch those Comedy Central Roasts and I love them. I think they’re extremely funny but I also feel a little bad watching them. So I thought who is the biggest person with the most dignity that would be the biggest overreach for this culture to try to take down? Nelson Mandela. On one hand I want to try to write these comedians (Sarah Silverman, Jeff Ross) well because I really respect their work, and Mandela, he’s no victim. Mandela has put up with a lot more hardship in his life than Lisa Lampanelli. How would he, this extremely wise and street smart man, rise above this culture? What would he say? It was a wonderful challenge for me to try to do justice to both sides of that.

Why B.J. Novak’s Photo Is Being Used to Sell Rain Ponchos and Swedish Cologne