Home Uncategorized If You Haven’t Heard Moses Sumney, You Will 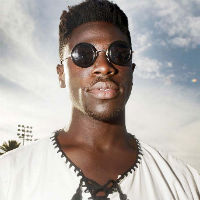 “It’s a little intimidating,” says 23-year-old singer-songwriter Moses Sumney about his quick rise on the L.A. indie music scene. Fusing soul and folk with a knack for creating live a cappella soundscapes (he uses a loop pedal to record and play back his vocals when he performs), Sumney’s music has been turning heads. He has yet to officially release an album—or even an EP—but in November Sumney performed at Beck’s one-night-only Song Reader concert at Disney Hall. Since then, he has been embraced by music writers and local DJs including KCRW’s Anne Litt, who has played his tracks numerous times. Even more impressive, the buzz has largely been the result of word of mouth. “I’m quite proud of that,” Sumney says. “I don’t have a manager or a PR company backing me. This is only about the music. It’s not about some company forcing me down peoples’ throats.”

With a show at the Wiltern on February 27 and a month-long residency in March on Monday nights at The Bootleg Theater, Sumney is ready to launch what may be the year’s most surprising and organic music debut.

If you ask his old friends from Riverside or San Bernardino (where he was born) about his sudden popularity, most of them will tell you that they didn’t see it coming. “They’re like, ‘What? You sing now?'” says Sumney, who moved to Los Angeles three years ago to attend UCLA. He didn’t start performing until after he had formed a band at UCLA but he had always written music. “I’ve always heard melodies in my head and I’m really good at coming up with stuff out of nowhere,” he says. “I think I wrote about 120 songs that way between the ages of 12 and 20. I didn’t use any instruments but I could sing and memorize the melodies.”

Sumney knew that the songbook he had kept in his head for more than a decade needed to see the light of day. “I’ve always known I was going to do it. It’s the only thing I’ve ever really wanted to pursue in life. It’s like I’ve been hiding it a little bit to incubate the music in my secret laboratory,” he says.

Fast-forward a couple of years: Sumney quit his college band so he could get a better grasp on his own musicianship. “I was tired of relying on people who knew more about music to flesh out what I wanted to do,” he says. He buckled down and taught himself to play the guitar. “I kind of forced myself to be reliant on myself musically.” The loop pedal, which Sumney has been performing with for a little less than a year, was another step in finding his sound. “It enables me to experiment with harmonies and voices,” he says, adding that his next big challenge is learning how to perform with the loop pedal while playing guitar at the same time.

Sumney attributes his sudden popularity to his collection of Soundcloud tracks, which he recorded in a hurry at a friend’s house after his work started receiving attention. But he stresses that he has no interest in rushing just because he has a lot of buzz. “I really want to have a long-term career, so it’s never been about getting popular quickly,” says Sumney, who names singer-songwriter India.Arie as his greatest influence. “I respect the art of music. It’s something I want to be a part of.”

For now, Sumney’s dance card is full. He’s recording an EP and an album, both of which are planned for release some time later this year. “Ideally I want my music to have the same feeling of a mix-tape that your friend made for you. I love nothing more than hearing about an artist through a friend. It’s the most beautiful way to come across something. The goal is to maintain that kind of grassroots feeling. It’s about the music and nothing else.”