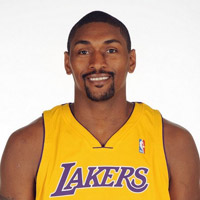 What’s in a name? For most of us, not much. For the world’s entertainers, considerably more. After all, making a household name for yourself is a lot tougher when you come from a family of Austerlitzes rather than a family of Astaires. Most people change their name to make it more user-friendly (example: Archibald Leach vs. Cary Grant.) Some do it in reverse. What happens when you change your name from something that rolls off the tongue to something bizarre, especially when you’ve already established a recognizable brand? Consider the facts:

Prince
Born: Prince Rogers Nelson
Changed to: Love Symbol in 1993, then back to Prince in 2000
Results: Not hot
The media had a good time referring to Prince as “The Artist Formerly Known As Prince,” but the majority of his biggest hits, including 1984’s Purple Rain and 2004’s Musicology, are still credited to Prince.

Metta World Peace
Born: Ronald Artest
Changed to: Metta World Peace in 2011
Results: Shot blocked
As Ron Artest, he clinched an NBA championship ring in 2010, scoring 20 points in game seven of the NBA finals. Shortly after changing his name, World Peace’s role on the Lakers was reduced by new coach Mike Brown. Knocking Oklahoma City Thunder player James Harden in the head during the 2012 playoffs didn’t help. He was suspended for seven games and the butt of world peace jokes for weeks.

Diddy
Born: Sean John Combs
Changed to: P. Diddy from Puff Daddy in 2001, then to Diddy in 2005
Results: More Benjamins
Despite being unable to use the name Diddy in the UK (another artist has those rights), the rapper-producer has continued to expand his music-fashion-acting empire and received a star on the Hollywood Walk of Fame in 2008. We’re impressed.

Snoop Lion
Born: Calvin Cordozar Broadus, Jr
Changed to: Snoop Doggy Dogg, then to Snoop Dogg in 1998, and then to Snoop Lion, it was announced today.
Results: ?!?!
A reggae album, documentary film, and coffee table book are reportedly in the works, but we’re concerned. L-I-O-N doesn’t pack as much lyrical punch as D-O-Double-G does, and Snoop doesn’t looks anything like a lion, dreadlocks or no. The only positive we can think of is the rapper’s got a built-in excuse for this PR stunt. Just say you were high, Snoop. Everyone will believe you.