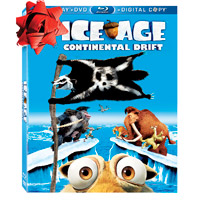 The holiday season means a deluge of shopping mall Santas and kids eager to sit on his lap. But for deaf children, the experience can be a difficult one. This season, they’ll have an easier way to join the fun. Today the Beverly Center will host a Signing Santa for deaf and hard of hearing children where they’ll be able to sign their wish list. Kids will also get to experience the Ice Palace, a set of interactive globes featuring the characters  Scrat, Diego, and Manny from the animated Ice Age films. The film’s character designer, Peter de Seve, will be onhand from 10 a.m. to 2 p.m., doing illustrations of the kids and the film characters.

The event is tied in to Fox Home Entertainment’s first ever picture-in-picture (PIP) Blu-ray, Ice Age: Continental Drift, which comes out next Tuesday (Dec. 11). The PIP technology allows viewers to watch the action while simultaneously following the American Sign Language interpretation from deaf actors Sean Berdy of ABC’s Switched at Birth and Amber Zion. Signing Santa will be on hand today from 10 a.m. to 8 p.m. and the Ice Palace will be available through Christmas Eve.

There Are Now Terrifying “Social Media Influencer” Dolls for Children