Home Uncategorized I Liked The Oscars This Year There, I Said It. 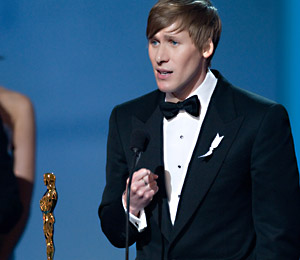 Understand that on the morning after the Academy Awards I am usually among the most outspoken and cynical of water cooler chatterboxes: Why the deadly banter? What’s with the dull art direction? Can someone please end the pointless montages? Isn’t it time, I sing along with a chorus of critics, to reinvent these proceedings?

This year the show’s producers made an effort to do just that. The whole evening was less stodgy, less staged, less ridiculous—don’t get me wrong, I love ridiculous—than before. There was more snap to the near three and a half hours, mostly because the producers filled the clock with less “cue the orchestra, shoo them off the stage, and get this thing over with” and more “Let’s enjoy ourselves and let it breathe a bit.” Producers Bill Condon and Larry Mark know what they like and not surprisingly translated it well: The thrust stage that made even the Kodak feel intimate; gorgeous sets that evoked both a theater’s backstage and a movie studio’s soundstage; jazzy orchestrations that were low on pretension yet still showy; and a host who was enormously appealing and whose only misstep was too little screentime, not too much. Even if I weren’t one of those dreaded musical lovers, I still would have had respect for Hugh Jackman working the room. The opening number was both insane and inane and I cracked up at his take on the economy (the Craigslist dancers? Come on, funny stuff) and his distillations of the films (Anne Hathaway was more than a good sport). Politically correct or not, how many people in the television audience didn’t relate to his “I haven’t seen The Reader. I was going to see it later, but I fell behind” song and dance? Most of the world was too busy queuing up for Paul Blart: Mall Cop, and you know it.

Contrary to many of the pans I’ve been reading today, I found the tribute/introductions to the individual nominees, even the awkwardly delivered ones, moving. When nominated actress after nominated actress welled up (even some of the actors did), it seemed genuine, the words from those who’d come before them unscripted and heartfelt (with the exception of Sophia Loren, who looked frozen in amber). I could listen to Eva Marie Saint and Robert DeNiro and Shirley MacLaine yammer on for hours—sorry, but I could. It was a relief to have Meryl Streep in the front row garnering the deserved attention and reverence for once that’s usually reserved for smirky Jack behind those shades. It was wrenching to sit through screenwriter Dustin Lance Black’s speech for Milk, or to see the sadness that washed over everyone’s face when Heath Ledger’s family accepted his award. Give me unaffected dialogue any day over some greenie ingénue’s banter with a comedic costar who will be but a distant memory next year.

Let’s be honest, most of the world is tuning in to fawn over stunning men and women in over-the-top couture and bling (see Tim Gunn grab Brad and Angelina midstep like a psycho fan and breathlessly proclaim: “You’re the most glorious couple on this red carpet!”). Most of the world likes flashy numbers (see Bollywood). Most of the world likes romance and heartbreak (see Titanic). Percentage wise, and reportedly the audience was up six points (13 percent as of 2/24)  this year, a tiny little pinpoint of those watching the Oscars actually have anything to do with film.

I say this from the perspective of someone who watched the show, as I customarily do, at a big annual Oscar party that’s been a tradition in our family since before I was born. Other than the Excel doc that has replaced our poster board (and that Michael and Tony projected with up-to-the-minute results of our Oscar pool—damn you, Rebekah and Zach, I was so close!), everything was familiar: chips in the bowl, lasagna in the kitchen, and me surrounded by the art directors, costume designers, screenwriters, and actors that make up my family and family friends.

What many forget is, this night is for those below-the-line folks as much as anyone. It’s easy for us to be cynics and dismiss so many films, because, well, so many aren’t so great. But so many are, and the older I am the more  respect I have for how hard it is to do anything well, no matter your profession, and how satisfying it is to be recognized when you do. Take Don Burt’s art direction in The Curious Case of Benjamin Button. That was brilliant work. Or Anthony Dod Mantle’s cinematography in Slumdog Millionaire? No news flash here, but it is genius. My family laughed at the inside jokes (they particularly enjoyed cinematographer Janusz Kaminski admitting that work is slow and the ribbing that Warner Bros. took from director Danny Boyle), but like any respectable Oscar party audience we were also properly superficial, critiquing hair and dresses and eye jobs. Maybe that’s what critics need to understand about the Oscars: It’s damn near impossible to reach a perfect balance between glittery surface and deep achievement, so try to enjoy it more from the middle of your brow.