Home Music Brian Collins Found His Place in the World of Indie Rock by... 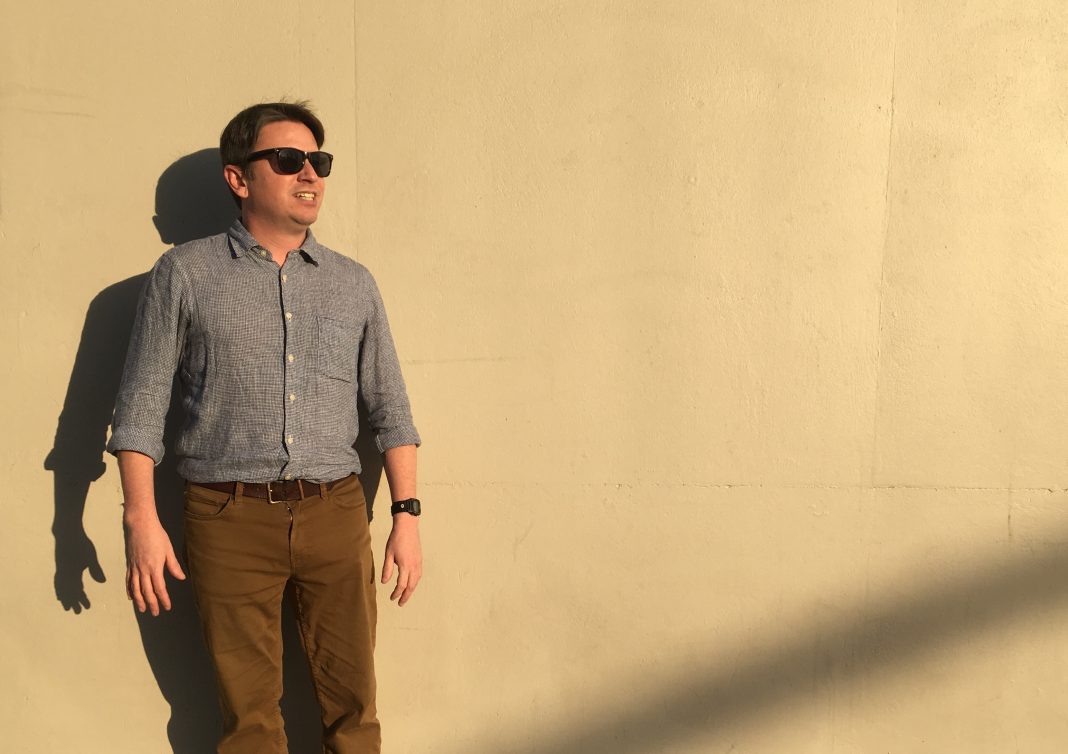 In the shadow of the Hollywood sign, where luxury vehicles navigate streets lined with homeless encampments as they head north into the quiet of the hills, musician Brian Collins is sitting at a table having lunch. He’s dressed sharply in a button-up and a tie, casually explaining how he ended up in this strange place from his native Virginia.

“There wasn’t a lot to do [in the Washington D.C. suburb of Fairfax County],” he says. “You could get on a bus or train and go into the city, but even once you got there it was like, ‘What do we do now?’ So it was either go skateboarding or go to a show, [those were] the two things you’d do.”

Collins is in a large room and a band on stage at the far end is riffing on Miles Davis’s “So What.” The group is being led by a person who once played with Aimee Mann and John Prine; the rest of them are schoolchildren.

“How’s your day going, Mr. Collins?” a young boy walking by asks, harmlessly interrupting the conversation as it starts to diverge into the ’90s punk scene in D.C.

In this place, the musician from Fairfax isn’t known as a musician, but instead as Mr. Brian Collins, a sixth-grade science teacher. With the exception of a few of his fellow teachers—such as the one leading the band on-stage—no one here knows Collins’s other identity as Hurt Valley, a ’70s soft rock-inspired act (think Graham Nash circa Songs for Beginners) that just released an album on the über-trendy indie label Woodsist. The album, Glacial Pace, which took three glacial years to create (plus 40-some years of glacial build up), is technically his debut.

“Life happens,” he says, considering the reality of having more gray hair than most people putting out their first records. “That much is true.”

Now in his tenth year of teaching, Collins is pretty settled in his vocation, but it wasn’t like he avoided music until recently. When he was still in Virginia, he played in a semi-serious band in his late teens, gigging around the extended Beltway area, and at one point getting a bite from Fat Wreck Chords, the label started by Fat Mike of NOFX: “We sent them one of our seven-inches—this was before email—and they wrote us back,” he remembers. “They were like, ‘This is awesome—when are you playing in California?’ And we were like, ‘Never.’ We probably could’ve if we had been motivated, but we weren’t.”

A long-term relationship with a woman working on a PhD kept him temping and bouncing around for a while, before he ended up getting his teaching credential and taking a job for LAUSD. Around this time, he took a trip to Death Valley with a friend who was “kind of a free spirit,” insisting on taking her station wagon up a mountain dirt road to a clearing littered with burnt-out cars and other forms of manmade decay.

“Nobody drove a station wagon there except for us,” he says with a laugh. “And then we hung out there for, like, two days. That’s where the name [Hurt Valley] came from—and when I came back, that’s when I started thinking about maybe recording songs again.”

There were a couple EPs in the early 2010s, which have since been scrubbed from the internet (“they just lived on Bandcamp in this dark void of nothingness,” Collins says), and then a long period of fractured work on Glacial Pace. Working alone, playing all the instruments himself, Collins recorded the album on nights, weekends, and summers in his apartment. Finding the right time to get away with playing drums was precarious, and kept things moving slow. So did the exhausting work of being a teacher.

“I think teaching is conducive to people who’re artistic, because it comes with the [summer] time off built into it,” he says. “But the actual time that it takes to do your job while you’re there… When you have the free time, you don’t really want to do anything.”

After lunch, at Collins’s first science class of the afternoon, students come bustling in wearing the closest things L.A. kids have to winter coats. Just a few days off from winter break, one boy is wearing a Santa hat.

Collins leads a digital experiment that day that the students do on Chromebooks, and then at the end of the class he explains a project for them to begin as homework. Their task is to create an insulated container that will act as a DIY freezer.

“A free pass from school for the next six years?” the boy suggests anew, reconsidering.

Collins has taught older kids before, but he likes sixth grade. “They’re right at that transitional age where they’re not mean, usually,” he says. “Everything’s still really brand new.” That innocence also means he’s free from the issue of having them make any sort of big deal about his music—“If it’s not on TikTok, they don’t care,” he says—but it still comes with the added issue of guiding transitional minds in a transitional era.

“This has changed everything,” he says, pointing to a phone on a table. “And not in a positive way. Like, toxic negativity. Constant interaction, constant engagement. Never not part of it. It’s a tough age to be, especially now.”

After school, with his tie taken off, Collins sits down at a nearby bar for a drink. Being a new member of the group, he’s curious and engaged on the topic of notable musicians who were once teachers: Sting and Ezra Koenig come up; Gene Simmons, too, if you can believe that he was ever trusted with a real job.

“Bob Pollard [of Guided by Voices] is the big one,” Collins says, talking about the prolific garage rocker known for beer-soaked, leg-kicking performances, who once taught fourth-grade math. “It’s so funny, him in front of a bunch of little kids.”

Pollard is also notable for the fact that, unlike Sting, Koenig, and Simmons, he taught for years after he had developed a notable music career—and only signed a record contract substantial enough to be a full-time musician when he was in his late 30s.

“It’s really hard to do music without having a job, you know?” Collins says. “Unless you’re at that level where you’re touring nine months out of the year.”

If it was difficult to pull off in the ’90s, it’s nearly impossible now: “Honestly, I don’t really have expectations for [Hurt Valley],” Collins says. “I don’t know what it’s going to become, or what it is. I really don’t.”

At this point the class is already listening.