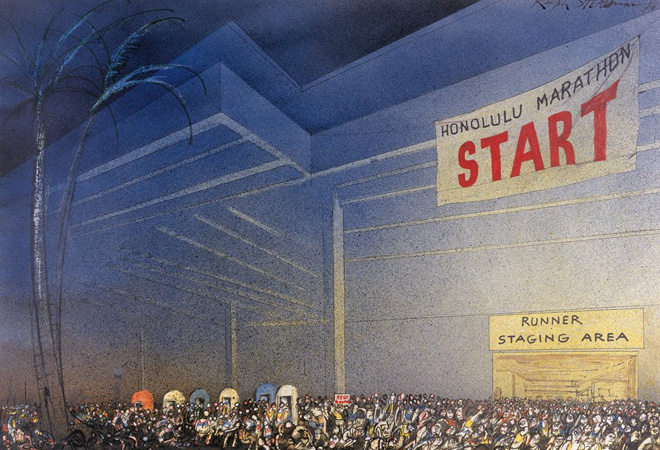 The Curse of Lono has long been the elusive title in the collection of any Hunter S. Thompson collection. After being released in 1983 it was only in print for a short time; a limited reprint in 2005 sold out before the book hit store shelves. Since then, it’s been nearly impossible to find it in any bookstore, and prices on Amazon run into the hundreds of dollars.

No more. Today, Taschen is releasing a new edition of the book, which has been abundantly illustrated by Ralph Steadman.

The storyline and language recalls Fear and Loathing in Las Vegas. Thompson is sent to Hawaii on assignment by Running magazine to cover the Honolulu marathon; shortly after landing on the island his assignment takes a back seat to violent locals, unrelenting weather, and the search for drugs, alcohol, and weapons.

After several mishaps, Steadman, who has accompanied him to illustrate the event, prepares to flee the island and Thompson admits:

“The whole thing was my fault. It was my plan that had gone wrong, not Ralph’s, and now his whole family was in the throes of a profound psychotic experience. Some people can handle ten days in the eye of a hurricane, and some can’t.”

The book is interspersed with excerpts from The Last Voyage of Captain James Cook, and Thompson’s story seems to parallel the doomed captain’s: welcomed to the island by the locals, given food and drink and worshipped as their god Lono, until a nasty turn of events causes the captain to end up as a pile of bones. By the end of the book Thompson’s narrative gives way to maniacal typed letters to Steadman where he worries that he is Lono incarnate and will suffer the same fate as the cursed captain.

The adventures also fuels Thompson’s writing, and he assures Steadman in one of his last letters written from his hideout in the City of Refuge:

“I’ve already had several offers for my life story, and every night around sundown I crawl out and collect all the joints, coins and other strange offerings thrown over the stakefence by natives and others of my own kind.”

This observation is classic Thompson and the book is a must-have for his fans.