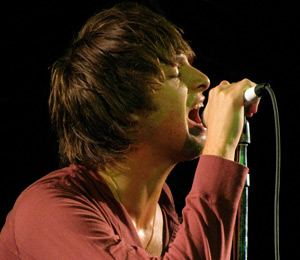 I’ve been hooked on Paolo Nutini ever since I saw him perform his breakout single, “Last Request,” on a late-night TV show two years ago. The way he closed his eyes while performing, painfully hunched over the microphone, made him so intriguing—I needed to see that live. So when I saw that he was the opening artist for Etta James and Solomon Burke at the Hollywood Bowl last summer, I had to go. Left unsatisfied by his too short set that evening, I jumped at the opportunity to see him again this year, this time as a headline performer at the Wiltern.

Anya Marina, a spunky blond singer I had never heard of before, opened the show. She was quirky and entertaining, using her ipod in lieu of a band because she’s a struggling musician who “just can’t afford it.” Very economical—I like that.  Marina performed a lyrical rendition of T-Pain’s “Whatever you Like,” that was both comical and pretty at the same time. She instructed everyone to sing along in hopes of reaching and inspiring T-Pain in his jail cell, and the audience obliged.

Paolo walked onstage shortly after, mumbled a few words in a heavy Scottish accent and began to play “Coming Up Easy,” the title song from Sunny Side Up, his June release. His voice sounded just as good – if not better – than he does on the album, and he mixed things up with slight changes to the tune and tempo. His body language was as closed-off as ever.

However, something changed over the course of the show. With each consecutive song—from “Last Request,” to “Candy,” to “High Hopes”—his torso lifted and stretched until he was almost upright, his moody eyes peaking out at the crowd. As it did, his voice got stronger, and I fell even harder. Was this a new Paolo? A visit to his official Web site offers this explanation: “I can’t sing a song like ‘High Hopes’ all hunched up. I have to stand with my chest out…This record’s called ‘Sunny Side Up’ for a reason. I want to keep it positive.”

How nice to finally see him.