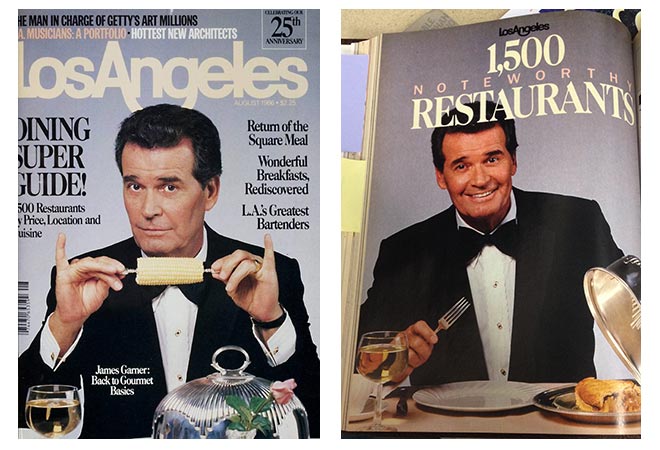 TV watchers from the 1950s remember him as the charismatic, poker-playing star of the Western TV show Maverick. Audiences from the ’70s know him as the smooth-talking, low-rent Los Angeles P.I. of The Rockford Files. In the ’80s he was the go-to guy for any number of TV movies, usually playing men who were simultaneously suave and down-to-earth. Off-camera, James Garner was known as a decorated Korean War vet (two purple hearts), an auto racing enthusiast, and an all-around stand-up guy.

We’ll remember him as the cover star of our August 1986 issue. That month’s edition of Los Angeles magazine featured our dining guide, which included pieces on “nuevo mexicano” cuisine and the return of “simple, square Eisenhower food.” It was Garner, dapper as ever and barely arching his eyebrow (one of his signature looks), who ushered viewers in. In another photo inside the issue, Garner lifts the lid on what looks to be a slice of apple pie—or is that a chicken pot pie? We’re not sure. But we do know that Garner, who died on Saturday at the age of 86, will be sorely missed by TV fans of many generations.