Home Film How to Start a Film Festival 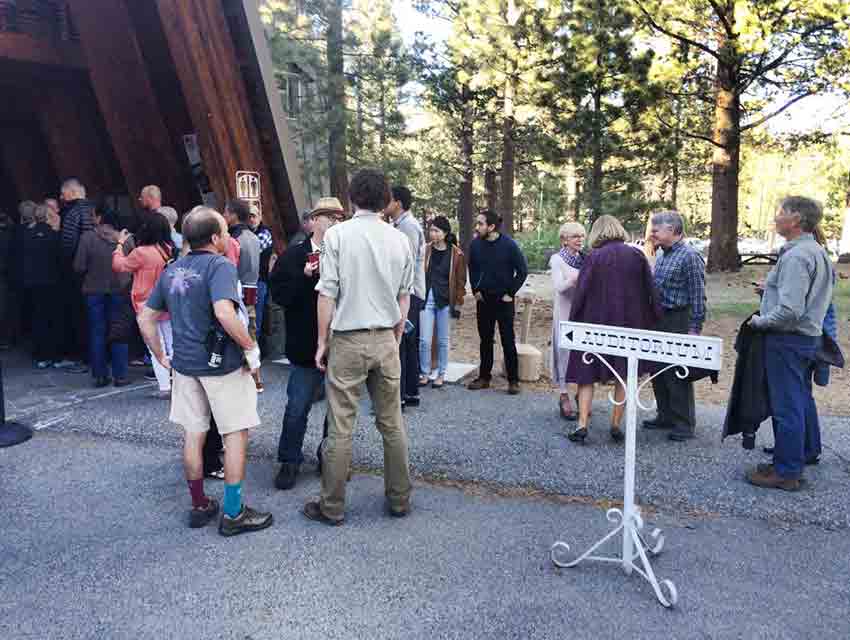 Have you ever wondered where film festivals come from? What happens between point A of an idea and point Z of actually hosting a festival? We talked to Shira Dubrovner and Paul Sbrizzi to find out just that. Together, the two have developed the Mammoth Lakes Film Festival, which kicks off its inaugural run this week. Dubrovner is the festival’s director and artistic lead, while Sbrizzi is its director of programming.

A ski resort town 300 miles north of L.A. and nestled in the Sierra Nevada, Mammoth Lakes is a picturesque location for a festival. Dubrovner, who worked in the film industry in Hollywood, moved there in 2007 and started a theater. Since then, she’s been active in the city’s artistic scene. Sbrizzi has worked in programming with Slamdance, Los Angeles Film Festival, and Outfest. Both are gearing up for a busy five days as the first MLFF premiere looms.

What brought you together on this fest? What spurred its creation?
Shira Dubrovner: I felt that this area was screaming for a film festival. Because I’m a local, I understand the community, and I think it takes a person who lives here to make such an idea successful. I called Paul, one of my old friends from film school, and asked if he wanted to partner with me. We had the same passion for really being there for filmmakers and trying to get away from Hollywood commercialism and getting back to supporting the artistry and storytelling.

Paul Sbrizzi: I’ve known Shira for a long time. We talked about the point of view of the festival, having it be driven by film as an art form and be very filmmaker-focused. That kind of sensibility is similar to what we do at Slamdance. I think that’s why it was a good fit. It’s worked out well. We have a really good working relationship and I’m proud of the effort we put in together. I think [the fest] represents what I see as interesting that’s happening right now in the film world.

What do you think will set this festival apart from all the others that are out there?
Dubrovner: We’re not there just to take on whatever is the hot item. We want to really find the honest and truthful artists, the ones who put everything on the line, who put their heart and soul into the piece. That’s not saying that the other festivals don’t, of course. We have access to the student housing community that supports the college that we have here in town. Because it’s summertime and all the students are gone, we’re going to be housing all the filmmakers together. I think we’re the first festival that offers that. I think that will create this energy and synergy between them with the excitement of supporting each other. Hopefully, that will spread through the community.

I believe the area itself is conducive to inspiration. We have natural hot tubs, country hiking, tours of a nearby ghost town. I’m hoping that by coming here and sharing their artistry with each other and our community, they’ll be inspired to continue on with that artistry.

What goes into acquiring the funding and connections that you need to put a film festival together? What’s the process been like?
Dubrovner: It’s been an amazing experience in the sense that everything is just falling into place. I think that’s kind of the universe telling me that we’re doing the right thing and that it’s the right time. It’s always scary going after a new venture, because you don’t know if it’s going to lose money or make money. Because we’re a nonprofit organization, we cannot lose money. I have to do things on a micro-budget, and because I come from the independent film world, I know how to get a big bang out of my buck. I know where to put my money and where I can do trades and offer exchanges with people.

Because we live in a ski resort town, we have a lot of second-homeowners who are in the industry. I’ve saved all my favors in my years in the industry, so I reached out to them. I had to be careful about that, of course. I think that I have a good sense of what people will be willing to do and what they’ll be willing to give, and [try] not to take advantage of that. And there’s a snowball effect. Once the first person says yes, other people start saying yes. It’s been a good ride so far.

What’s your programming philosophy? How much work did finding the right films take?
Sbrizzi: I would say we had maybe between 200 and 300 submissions. It was almost all me watching them. Shira watched a lot of them too, but mostly I watched them by myself. It was actually a pleasure. I have a really high tolerance for this stuff. One year, I watched over a thousand shorts for Slamdance, so this was no problem.

With this festival, I had the freedom to really go on my gut feelings. And what I appreciate in any film, particularly narrative films, is taking a sense of who the filmmaker is and their point of view. We prefer filmmakers who focus on the art form, who express something personal rather than try to reverse-engineer something that will appeal to an audience. There are trends in the film world and the festival world, and certain types of films are hot at certain points in time. I didn’t want that to be a big focus, either. I wanted to find films that had a revolutionary spirit to them, that were trying to do something, move the culture forward, or challenge what’s going on.

Going forward, how would you like to see the fest grow?
Dubrovner: We’d love to maybe get more panel discussions and support, with more industry people coming to help mentor blossoming filmmakers. But right now, we’re at that first step, where we’re just creating that world for them. We hope that it becomes a destination festival, that people from around the country will learn about us and come here to experience a week of appreciating and celebrating the inspiration of filmmakers. But we’d want to always stay true to the spirit of what we’ve started: trying to find those nuggets of gold, of true artistry, and not go too commercial.