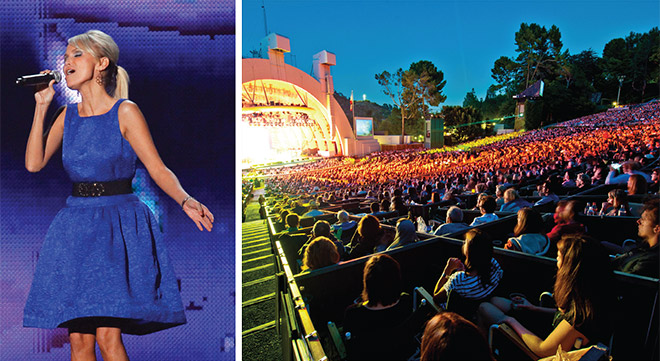 Have a Seat
Boxes can be pricey (a four-seater with table costs $450, on average), but you can snag $1 nosebleed seats on Tuesdays, Wednesdays, and Thursdays. Round up at least ten friends for a show—perhaps Janelle Monáe (June 22)—and you receive a 20 percent discount on freshly renovated bench seats.

Ride On
You could pay $17 to $45 to wedge your car into the main lot. A better option? Use one of the Bowl’s 14 Park & Ride lots. The round-trip fare is $6 if you reserve at least 48 hours in advance ($10 for walk-ups). You can also catch shuttles ($5 round-trip, no reservations) that depart from the Hollywood & Highland complex, the L.A. Zoo, and Studio City.

Listen Up
Before you reach the main gate, visit the Hollywood Bowl Museum to see (and hear) Live from the Bowl, a chronicle of recordings from performances at the amphitheater. The clips, which date from the 1920s, include numbers by the Beatles and the Brady Bunch.

Stake Your Claim
Arrive an hour before start time (90 minutes on weekends) to get a snazzy new table in one of 15 picnic locales. The most coveted spots are closest to the stage, in areas 6 and 7.

Say Good Buy
Kristin Chenoweth (top left) opens the season (June 21), which runs through September. Plan ahead for the July 4th Fireworks Spectacular with Steve Martin or the movie music of John Williams (August 29 to 30).

Put on a Nightcap
If it’s before 11 p.m., take a 15-minute walk down Highland Avenue and head east on Hollywood Boulevard for a margarita at Lotería Grill or a martini at Musso & Frank Grill. Go west to the Roosevelt Hotel and order a boozy milk shake or a glass of wine at its 24-hour diner, 25 Degrees.