Home Film How To Do… The Egyptian Theatre 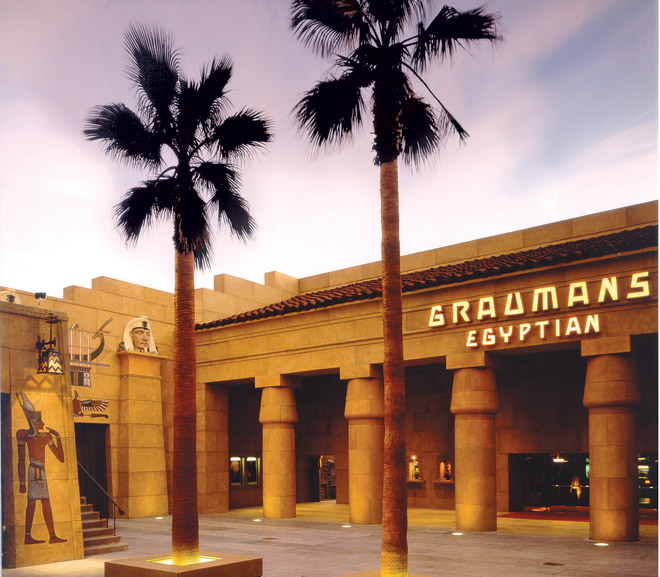 Opened in 1922, a month before the excavation of King Tut’s tomb, the Egyptian Theatre was ground zero for Hollywood’s first red carpet premiere: Robin Hood starring Douglas Fairbanks. On a moonlit evening the paintings of jackal-headed gods make the courtyard feel like a movie set. After falling on hard times, the complex was sold in 1996 for $1 to American Cinematheque, which presents vintage, foreign, and indie flicks. “We brought back the classics and we brought back the audience,” says Margot Gerber, who produces events and helps with programming. “There’s a generation of people who have never seen these movies on the big screen.” » 6712 Hollywood Blvd., Hollywood. All Dolled Up
Itching to dress like a bootlegger or a flapper? The theater’s 91st birthday shindig happens in October. Like superheroes? Try the Capetown festival in spring. From tiki and film noir celebrations to an impressive roster of filmmakers, actors, and behind-the-scenes craftspeople who drop in for post-screening Q&As, it’s a cinematic smorgasbord. Price Is Right
Tickets to all shows are $11, or $7 if you’re a Cinematheque member ($65 a year), which for the frequent moviegoer is a small price to pay for a front-row seat to film history. Wheel Deal
If you don’t want to hunt for a metered street spot or shell out for a lot, try Hollywood & Highland two blocks west. With validation from most merchants you can stash your car for up to two hours for $2. Ear Candy
The sound quality is extraordinary. “It’s not substantiated by any scientific explanation, but I think it’s because much of the floor is made of wood,” explains Paul Rayton, the projectionist since 1999. “It gives a sort of resonance that makes the seats respond with a certain frequency. I call it the ‘Carnegie Hall effect.’ ”

☛Drink: Pretend you’re a 1930s novelist slumming it in Hollywood as you knock back martinis at Musso & Frank. For a more modern vibe, Sadie offers sophisticated cocktails and a clubby, understated decor.

☛Eat: Skooby’s hot dogs are known for their snap, but if you want something more grown-up, grab a table at LoterÍa Grill for fiery cochinita pibil tacos and a high-octane margarita.

☛See: Tucked among what may be the country’s highest concentration of stores selling Lucite heels and garish suits, there’s Larry Edmunds Bookshop, where vintage books and movie posters fill a shop that’s a movie buff’s dream.