Home Uncategorized How To Do… Olvera Street 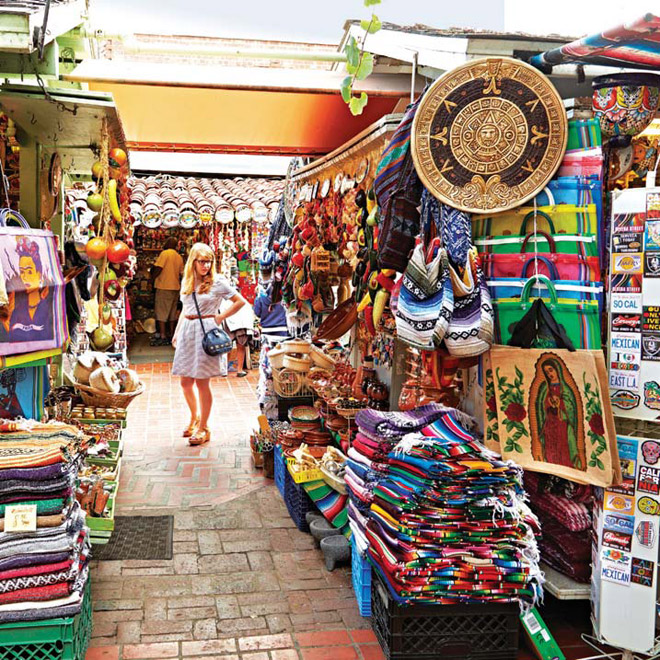 Single mom Christine Sterling came to L.A. in the 1920s in search of its romantic Spanish history, only to find the city’s birthplace suffering from neglect. Her campaign to revitalize Olvera Street transformed a forgotten alley into a fantasy Mexican mercado. Olvera Street is the centerpiece of the El Pueblo de Los Angeles historic monument, where some 70 merchants sell everything from silver jewelry to marionettes. The tourist draw hosts dozens of events, including a Día de Los Muertos festival in the fall and Las Posadas, a Nativity celebration leading up to Christmas. It may be a Jazz Age facsimile of old Mexico, but it brims with authentic curiosities. Don’t Rush
At the 1818 Avila Adobe, L.A.’s oldest home, there’s a worn wood bench where you can enjoy the aroma of freshly made corn tortillas. Check out the huaraches at the Caballero Company puesta, one of the brightly colored kiosks that have occupied the street since the 1930s. Take In Art
In 1932, David Alfaro Siqueiros’s mural of a crucified Indian was deemed too shocking and painted over. After a $10 million preservation effort, América Tropical is back. An interpretative center about the muralist’s work is more Apple store than fusty museum. Say Cheese
Vendor Jesus Hernandez fired his fortune-telling canaries in 1964 and hired a donkey to pose for novelty photos. Generations of tourists, not to mention the last three mayors of Los Angeles, have had their picture taken with a (now-stuffed) burro. Park It Cheap
You pay for the parking, but all the museums are free. Five city-owned lots sit within a one-block radius. Lot 5, at Alameda and Arcadia streets, is a bargain, charging $5 for the day. Or take the Metro, hop off at Union Station, and cross Alameda.

☛DRINK: La Golondrina cafe, with its massive fireplace of Civil War-era workmanship, is famous for its tart pomegranate margaritas. It’s worth the walk across Cesar E. Chavez Avenue to sample local brews from Spring Street Smokehouse, especially if you hit the $3 happy hour from 3 to 6 p.m.

☛SHOP: Pick up a handmade leather purse or wallet at Guadalajara novelty.