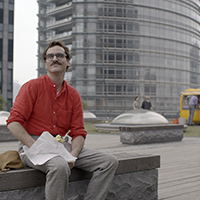 Jeannine Oppewall had to resurrect a Los Angeles that had long since passed while K.K. Barrett had to imagine Los Angeles in the not-too-distant future. Both are production designers, responsible for working with producers, directors, and other artists to determine what movies look like. Oppewall created the dark moody cityscape in 1997’s L.A. Confidential while Barrett created the sunny pedestrian technopolis in last year’s Her.

At a special master class at the Los Angeles Film Festival, the two sat down to explain how they approached these two movies, which feature L.A. not simply as a backdrop but as a character.

Oppewall, who has also worked on Pleasantville, Catch Me If You Can, and Seabiscuit, has been nominated for four Oscars. She has a boisterous Massachusetts accent and a loud voice. Her enthusiasm for her craft is obvious. She specializes in stories set in the past. It’s easy to forget how difficult it is to find locations that look the same as they did decades ago or look as though they could have existed back then. Oppewall spoke of how she found what she needed for L.A. Confidential, a noir set in the early 1950s.

“I read the novel several times before, and I read the script several times over as well… I spent about ten weeks in the car with the location manager… He would drive, and I would point at things and say, ‘Stop, get out here. Let’s take a picture here. Let’s think about this. How about this?’ I had the script memorized… You internalize the story to such a degree that when something jumps out at you, it says ‘Take me, I want to be in your movie!’ It’s an interesting way of working, because you do have to prime your pump and sit with it forever and let the locations come out at you. I drove around on the weekends by myself with a collection of post-its on my dashboard of places I didn’t have yet. Each had a name, a location, and the action to take place there, and every once in a while, I would find something that would work.”

Los Angeles is synonymous with noir. The harshness of the sun throws dark deeds into sharp relief. Crystal clear blue skies are rare. In the ‘50s smog was rampant. The vision of L.A. in that era is a sub-cliche of wider notions about what America was like back then. There’s the clean, ordered world of TV dinners and men in nice suits, but it’s shadowed by murder, extortion, rape, and other crimes. In L.A. Confidential things are not as they seem, and Oppewall kept that in mind at every step of production.

While Oppewall had to shape the present to fit the past for L.A. Confidential Barrett’s mission on Her was to make the present look like a rosy future. Barrett is more reserved than Oppewall though no less knowledgeable. He’s a frequent collaborator of Spike Jonze and Sofia Coppola, having worked on Being John Malkovich, Adaptation, Lost in Translation, Marie Antoinette, and Where the Wild Things Are. Her earned him his first Oscar nomination. Here’s how he described the trickery that went into concocting a future L.A.:

“There were really no rules. We could do whatever we wanted to and put a date on it. We kept moving the date on when the film took place… It was important to us not to celebrate design advancement by looking at technological items or cars, things that date a film or story. It wasn’t about that, it was about characters… Our idea was, even before the script, to shoot in two or three cities and call it one place. I quickly ran out of buildings I really liked in Los Angeles, because we didn’t want to show things made earlier than 1990. So we looked in four or five different cities across the world, and we found everything we liked in Shanghai… In the film, you have a building from Shanghai, and then there’s a part of Los Angeles across the street. When the main character enters his apartment building, he goes into the Pacific Design Center lobby, then ends up at 9th and Figueroa, and before that he walked through a concourse in Shanghai. But we always collage cities like this anyway in filmmaking. Shorthanding distances is fair game. It’s just in this case, we were jumping continents.”

Much of the “futuristic” landscape of L.A. is present-day Shanghai. The film blends the best qualities of both cities–the public-friendly spaces of the Chinese metropolis, the more personable interiors of the American one—to make an alien but reassuringly familiar urban center.

Barrett and Oppewall’s discussion was moderated by Mary Sweeney, who produced and edited David Lynch’s Mulholland Drive. Set in then-contemporary L.A., that story also probed the fantastical aspects of the city’s shared cultural image. For an hour or so, artists who had created visions of the same city in the past, present, and future were able to talk about their common and distinct challenges.