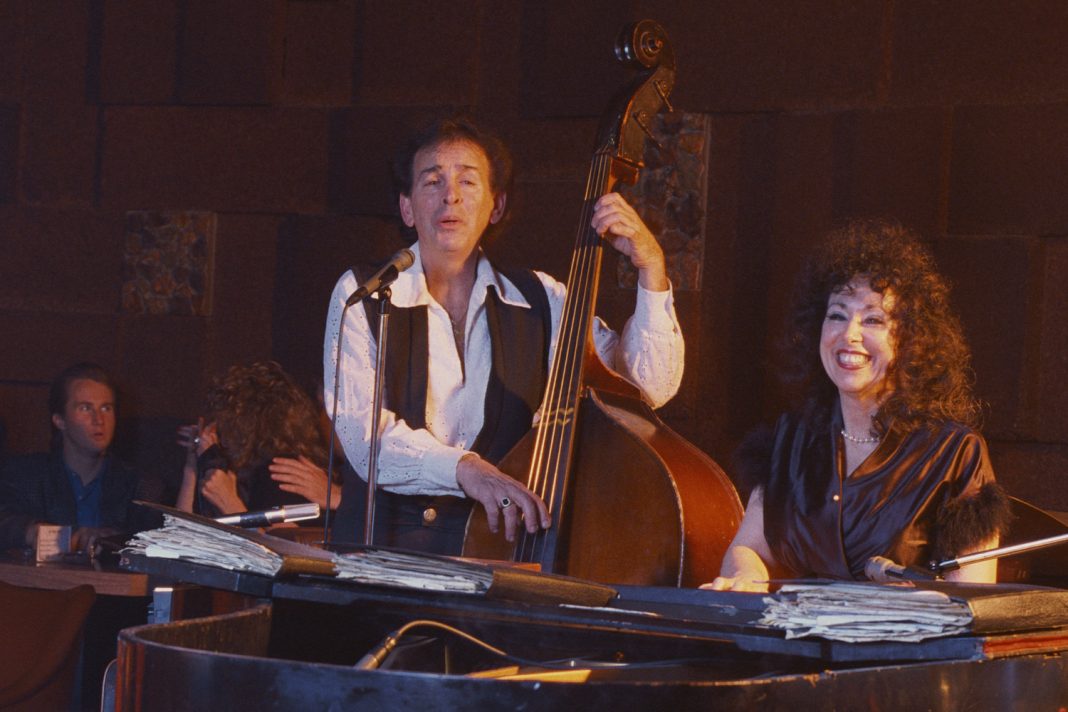 Los Angeles has historically been short on rituals. This is partly attributable to the abundance of transplants who treat the city like an ATM: a place to get cash and leave as quickly as possible. But it’s also a function of a sunny self-mythology rooted in eternal youth, where old things substituted for the new sustains an illusion of agelessness—or at least that’s what the developers would have you believe.

But over the last four decades, the city’s best ritual was world-renowned. In sickness and in health, five nights a week, the jazz lounge act, Marty and Elayne, was the most dependable pairing this side of Magic and Kareem. Marty’s death in January of cancer deprives L.A. of a cultural landmark, a swinging epicenter with free admission.

From 9 p.m. until 1:15 a.m. Tuesday through Saturday at the Dresden Room in Los Feliz, the crowds witnessed a campy spell cast by a telepathically bonded duo. Marty played drums and bass. Elayne handled the piano and flute. Each night, they transported you into a glamorous alternative reality where smoking indoors was permitted, the martinis never caused a hangover, and the sparkling jumpsuit never went out of vogue.

I discovered them, like millions of others, in the 1996 cult hit Swingers. During Jon Favreau and Vince Vaughn’s struggling-actor period in then-bohemian L.A., the Dresden served as their Algonquin Room. They filmed multiple scenes there, including the iconic clip where Marty and Elayne cover “Staying Alive” with rhinestone voodoo.

The Dresden was the most reliable go-to in a place of constant upheaval. Favreau and Vaughn’s characters understood that when some place was “dead anyways,” the Dresden remained unfailingly alive. This was all Marty and Elayne, blending showmanship, Catskills comic timing, improvisation, and passion for the music itself—which ranged from their own originals to Duke Ellington and the Bee Gees, the Doors to Ricky Martin.

Showing visitors that Los Angeles had real character required you to take them to Marty and Elayne. They were funny, but never a joke. Even toward the end of their run, if you stayed late enough, you’d invariably hear them catch an eccentric but funky groove. Vaughn once said about them: “Sometimes they’d get lost in it and rock and sweat . . .  And then there was other times they played the song almost with a twinkle in their eye.”

Born during the Depression, Marty Roberts split his childhood between Brooklyn and the Bronx, acquiring a borscht belt humor reminiscent of Jackie Mason and Henny Youngman. He became enraptured with drummer Gene Krupa and began following him around from gig to gig. Paying his dues in unremembered jazz bands, Marty played society gigs and cut hair to make a living. After a stint in Florida (“too muggy”), he headed west, where he met Elayne, a teen prodigy who had sung with Count Basie. She was looking for a drummer and, as she often quipped with sterling timing, “I found one.”

Originally billed as the Elayne Roberts Trio, they ripped in Lake Tahoe, Las Vegas, and Palm Springs. After a stint at Michael’s in Los Feliz (which eventually became the swing mecca the Derby before becoming a Chase bank), they arrived at the Dresden in 1981. The place was then a strictly 40-and-up bar—as Marty said, “Nothing shaking at all.”

Things quickly shook. By 1987, they accomplished their lifelong goal of getting played on jazz radio. With that success, Marty told Elayne that the achievement made them artists and “we shouldn’t do songs that make the light go out of our eyes.” They immediately tossed out half their old repertoire to focus on what they loved the most.

Shortly after, a starring role in Tom Petty’s “Yer So Bad” video made them recognizable to MTV audiences. David Lynch became a fan, thanking them “for bringing jazz standards to a new generation.” They played behind Julia Roberts at the club when she delivered a spontaneous rendition of “Makin’ Whoopee,” as Kiefer Sutherland bought a round for the bar.

Flea regularly popped in to jam. One night, during “Evil Ways,” a customer started breakdancing and knocked over the mic. Afterward, the Red Hot Chili Peppers legend said, “When we play that primal stuff, anything can happen.”

After Swingers posters adorned every dorm in America, the bar became standing-room only once more. I moved to the neighborhood in the mid-aughts; even then, the place was flooded with fedora-clad bros looking for “beautiful babies” and telling each other that they were “money.”

But in the last decade, something special happened again. With the passing of time, the crowds became manageable. It was still impossible to get a seat on the weekends, but most weeknights, if you came early or late enough, you could take communion through sequined covers of “Puttin’ on the Ritz” and “The Lady Is a Tramp.” Marty and Elayne helped create a deeper sense of greater community. Celebrities were still frequently spotted (Natalie Portman, Donald Glover, Tessa Thompson), but it never felt Hollywood. There was no better place in the city to slowly destroy your liver.

About five years ago, I interviewed them on their 35th anniversary. Marty was all punch lines and charm, a reminder of my late grandfather, another outer borough-bred jazz fanatic with a wry and profane sense of humor. Elayne was saintly and paid me the finest compliment I’ve ever received (“You look like a young Errol Flynn”). What struck me the most was the simplicity of Marty’s wisdom. His secret to life: “You’ve got to enjoy what you’re doing, no matter what it is. The rest is just bullshit.” His secret to marriage: “Like in a jazz band, a happy marriage depends on communication.” His philosophy on art: “To do it right, it has to come from the heart.”

Over the last decade, many of our most important modern rituals have gone dark: The Low End Theory every Wednesday at the Airliner and Funkmosphere every Thursday at the Virgil have both disappeared. The Piano Bar in Hollywood that nurtured Kamasi Washington’s West Coast Get Down is gone. So is the Blue Whale, the locus of the city’s experimental jazz scene, which never reopened after the pandemic. Taix is on its way out too. Too many others are critically endangered.

This is a natural function of time, but with the constant increases in rent, it becomes more difficult to operate the independent venues and bars that nurture artists, giving them time to find their audience and hone their craft. That is, if the artists can even afford to live in an L.A. that has become even more inhospitable to the creative lifestyle.

During the pandemic, a half-dozen people told me that they most looked forward to seeing Marty and Elayne again after this was all over. With his absence, the city has a deficiency of swing.