Home News How Mark Rylance Became A Bad Golfer for ‘The Phantom of the... 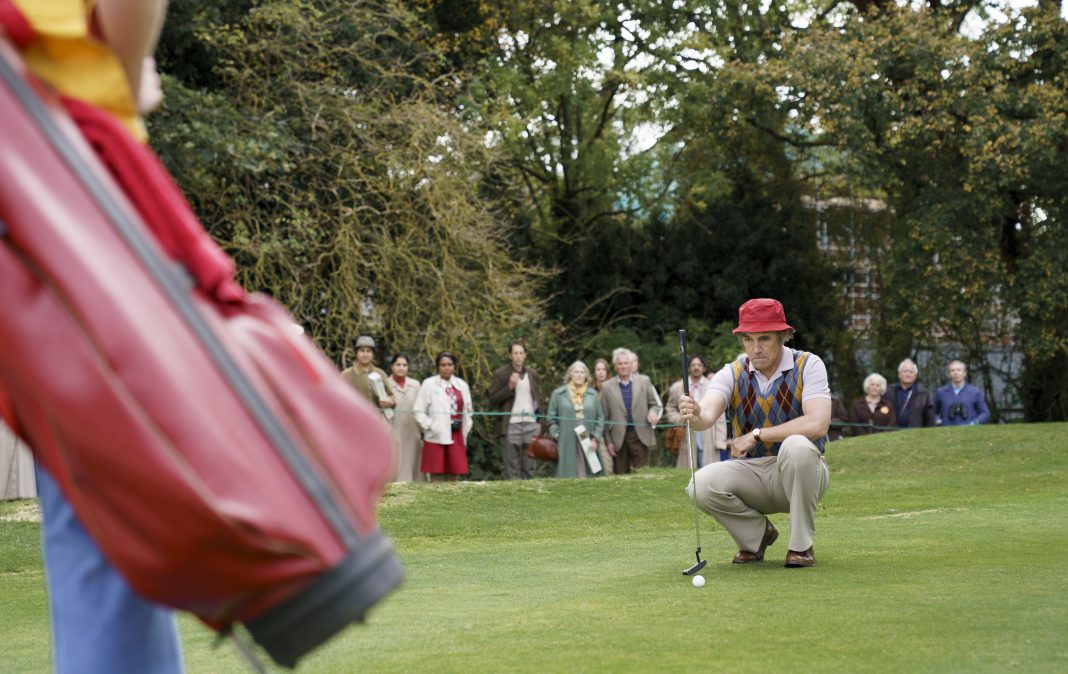 Though Mark Rylance loves to play golf in his spare time, he actually had to learn how to poorly perform on the green for his newest role in The Phantom of The Open.

“Golf can be frustrating and Mark is a better golfer than we are. He actually made himself look bad,” co-star Christian Lees told LAMag. “Sometimes he would be putting and he would accidentally get it in, and he would be like, ‘Awe,’ and we’d be like, ‘Wait, he’s like, good.’”

“It’s interesting because to be bad every time, shot after shot and scene after scene, you kind of have to be good,” director Craig Roberts added. “He was pretty good. He’s pretty method, so we sent him a bunch of clubs and he practiced a lot at home.”

The Phantom of the Open tells the heartwarming true story of Maurice Flitcroft (Rylance), a dreamer and unrelenting optimist. This humble crane operator from Barrow-in-Furness managed to gain entry to The British Open Golf Championship qualifying in 1976, despite never playing a round of golf before. He shot the worst round in Open history and drew the ire of the golfing elite, but became a folk hero in the process and, more importantly, showed his family the significance of pursuing your dreams.

“There’s just something about Maurice and his message,” producer Tom Miller said of the importance of making this film. “He did it because he loved it. He didn’t let anyone tell him not to do it and I think that’s a good and more realistic message. If you follow your dreams, you might not get where you want to go but just by following that dream, you might get somewhere else that’s more interesting. I think that’s what Maurice did and that’s why it’s almost a more realistic and inspiring message than just simply following your dreams.”

Miller and several of the film’s actors dove into that message that Maurice taught his children before his passing when they had the opportunity to visit some of the family members in their hometown.

“They’re amazing in the most colorful way,” Roberts said. “They’re fantastic. Tom actually spent more time with James, who is the surviving son of Maurice. He was involved with the project throughout. We really wanted to make him feel proud of his father and certainly of his family, so I think he’s happy with it.”

“We actually got so close to them that they ended up being in the film,” Miller added. “The real James Flitcroft is actually in the movie. He plays a character on the street who talks to his dad and then we found out that Maurice’s granddaughter is a fantastic actress, so she’s got a role as a secretary later in the movie. It was really heartening and we did a fantastic screening in the town that Maurice is from. Lots of people came who knew Maurice and actually seen some of the scenes we were depicting in the film in real life. The reaction we got from that was fantastic and that was the most heartening thing that we kept true to the spirit of Maurice and his family, and that people recognized it and really responded to it.”

The Phantom of the Open was filmed at various locations throughout the UK in October and November of 2020. According to Miller, the global COVID-19 pandemic actually became a blessing in disguise for the project because they suddenly had immediate access to full golf courses that would normally have been booked with members. The empty courses made for a really fun set on and off camera.

“It was the perfect movie to film in the pandemic because we were out in the open, playing golf. We got lucky really,” Christian said.

“It was kind of a dream come true,” Jonah Lees added. “I mean we like golf so to be able to be on those golf courses, just by ourselves… But we didn’t hit as many balls as I thought we would have done.”

All in all, the cast and crew wants to remind moviegoers that this project is not a sports movie, but rather an uplifting and inspiring piece of non-fiction.

“I’ve had friends who say, ‘Well, I don’t play golf,’ and I tell them it’s not a golf movie,” Jonah said. “It’s about golf, but it’s really about family, it’s about ambition, it’s about believing in yourself, it’s also about how do you define success because he was successful in his mind. I think he was successful because he was happy on the green and he wouldn’t let anyone tell him he couldn’t do what he loved doing. I think that’s what I took most from the movie.”

The Phantom of the Open opens June 3.