Every wonder where crazy rightwing anti-vaxxer conspiracy theories are born? Turns out at least one of them was (inadvertently) hatched right here, at Los Angeles!

Those rumors a few weeks ago that Governor Gavin Newsom had gone into hiding after suffering a traumatic vaccine booster side effect were at least in part fueled by Los Angeles’ March story on the California gubernatorial recall election, which used a Newsom lookalike for the cover image. Seizing on LA Mag’s six-month-old casting call for a Newsom doppelganger, anti-vaxxers and other tin-foil-hat types started spreading the rumor that the Governor had hired a body double to cover up for his illness. They pointed to Newsom cancelling a long-planned trip to Scotland in late October for a climate summit and the fact that he had stayed off the grid until Nov. 9, when he popped back up at the California Economic Summit, as evidence that something nefarious was going on with the governor’s health. At the time, Newsom’s office would only say that “family obligations” had kept him out of the public eye for a bit, which, of course, only poured gasoline on the conspiracy fire.

Here at Los Angeles, we first learned of our own role in the conspiracy on Nov. 8, when photographer Corina Marie Mazzi, who shot the March Los Angeles cover, received an email from Markus Allen, host of the podcast “Escape the New Normal” and founder of “Operation Wake ‘Em Up,” a website that publicizes anti-vax rhetoric, seeking answers about our old casting call: “There’s a rapidly growing conspiracy theory,” the email read, “that you’re involved in covering up the disappearance of Newsom and will roll out a crisis actor to prove he’s still alive and not vax damaged.”

Mazzi attempted to explain what really happened — that actor-comedian Charlie Farrell had been hired to impersonate Newsom blowing a big pink bubble-gum bubble for our cover — but that didn’t do much to kill the rumor. A few days later, a TikTok user posted a video montage of various photos of Newsom placed side-by-side with a screen shot of Los Angeles mag’s casting call, adding the Fleetwood Mac tune “Little Lies” as an ominous soundtrack.

Then Robert Kennedy Jr got in on the act, publishing a report in The Defender, a website run by Kennedy’s anti-vaxxer group Children’s Health Defense, claiming that “sources close to Newsom” confirmed that the governor had suffered an adverse reaction to his Moderna booster and developed symptoms similar to Guillan Barre Syndrome. GBS, which has been incorrectly associated with Covid vaccines despite the CDC dismissing any correlation, can cause nerve damage, muscle weakness, and paralysis.

Following up on that report, Silicon Valley philanthropist and anti-vaxxer Steve Kirsch speculated on his Substack, which he shared to Twitter, that Newsom had actually developed Bells Palsey, a condition that can cause facial paralysis. “Did the vaccine cause Bell’s palsy for Newsom?” he wondered. “He was perfectly fine before the shot and within hours after the shot he’s reported to be paralyzed. Could be bad luck. But come on.”

Kirsch and his fellow anti-vaxxers are seemingly unaware that both Bells Palsey and GBS take weeks to develop to severity, which would rule out both an immediate onset and a recovery after only 13 days.

Next up was notorious conspiracy theorist Alex Jones, who was recently found guilty in four defamation lawsuits stemming from his assertions that the grieving parents of Sandy Hook shooting victims were crisis actors. Jones claimed to have nebulous “California Law Enforcement” sources confirming that Governor Newsom was “very sick” following his booster.

The rumor mongering irked Newsom’s wife, Jennifer Siebel Newsom, enough for her to Tweet — and then delete — a remonstration to conspiracy theorists to “stop hating and get a life,” two days before her husband resurfaced at the Economic Summit.

Newsom himself brushed off the reports, telling reporters on Nov. 10, “I had absolutely no impact whatsoever from the COVID shot—the original or the booster. None.” He explained away those mysterious family obligations, saying his children, aged 5-12, held an “intervention” to insist that their father spend Halloween with them (indeed, on Nov. 1 he posted a photo to Instagram of himself dressed as a pirate after trick-or-treating with his kids).

As for LA Mag, we’re now thinking of a Nancy Pelosi cover sometime in the future — keep an eye out for the casting call! 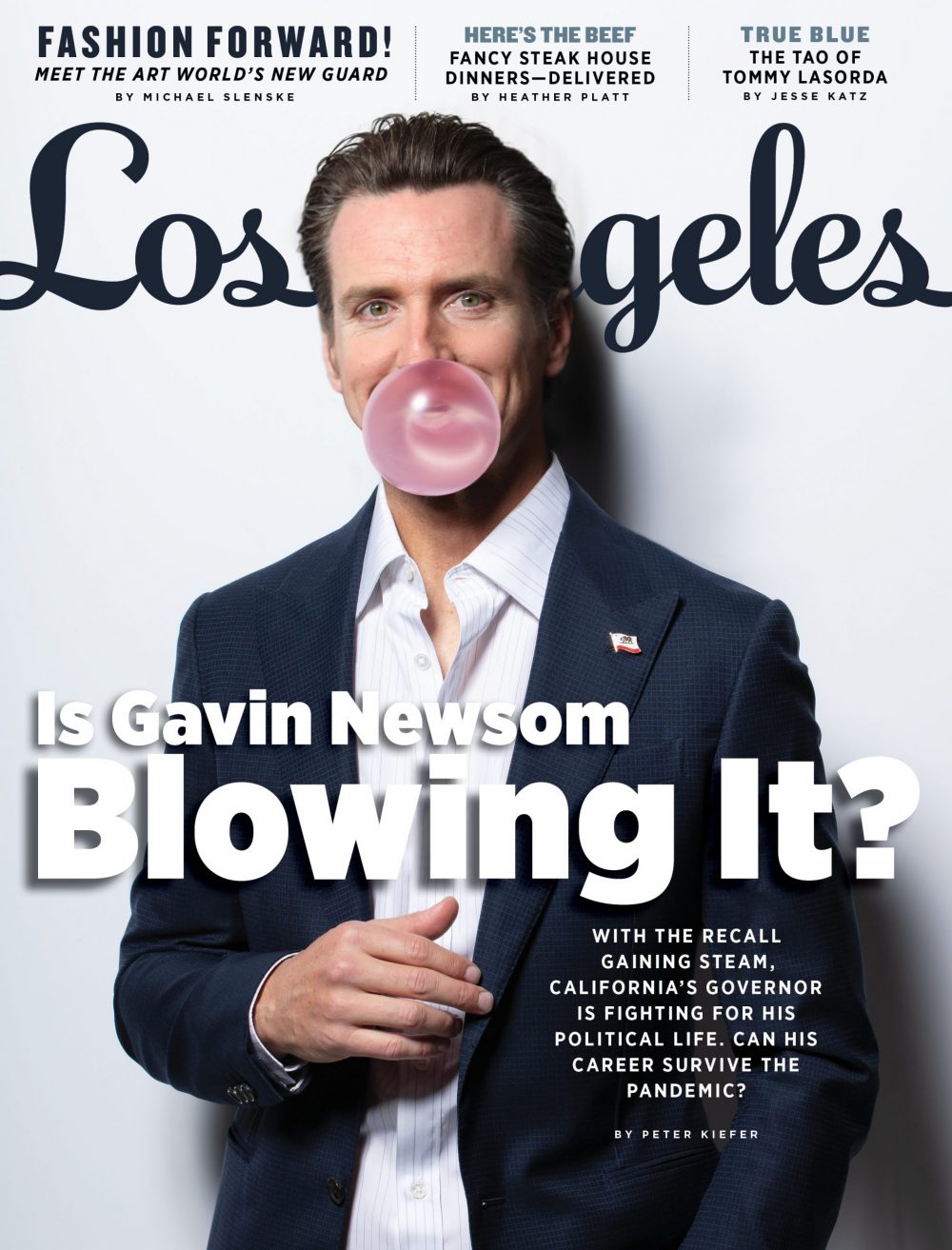 This DTLA Gas Station is Charging More Than $8 Per Gallon