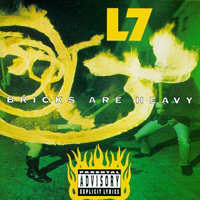 The Backstory
In 1985, Californian Suzie Gardner and Chicagoan Donita Sparks meet while working as staffers for LA Weekly. They hook up with bassist Jennifer Finch and drummer Demetra “Dee” Plakas and dub themselves L7, reviving a 1950s beatnik term for “square” (try it with your fingers). The band begins a promising climb up the indie ladder, signing to Bad Religion’s label, Epitaph, for their self-titled debut then moving to Seattle’s Sub Pop, the label that will usher in the grunge era, for its follow-up Smell The Magic. For its third album, Bricks Are Heavy, L7 bounces to Slash/Reprise, which pairs them with producer Butch Vig, who’s riding an unbeatable alt-rock wave with the Smashing Pumpkins, Sonic Youth, and Nirvana.

Why You Should Listen
As a band L7, and particularly Bricks Are Heavy, formed the connective tissue between Seattle and Los Angeles, cities that at the dawn of the ’90s, couldn’t have been further apart—spiritually and aesthetically. Although L7 would be mistakenly and forever be connected to the Riot Grrrl movement, the band was more heavy metal crunch and Sunset Strip sleaze than jagged, tribal punk rock, more KISS than Bikini Kill. L7 descended from the Runaways, metal bands like Motorhead and Black Sabbath, and 1960s surf rock. (Sparks is a Beach Boys and Dick Dale fan.)

Local Color
Bricks Are Heavy is mix of swagger, sardonic social observation, and gross-out humor. (At the 1992 Reading Festival Sparks flung her used tampon at a bunch of rowdies, cementing her place in shock-rock lore.) It mostly eschews political commentary (aside from the anti-Iraq War screed “Wargasm” and the anti-religion snark of “Scrap”) for the everyday complaints about the “art ghetto” lifestyle. Sounding like a heavily tattooed and very P.O.’ed Erma Bombeck, Sparks’s songs assail paramours skating on thinner and thinner ice (“Letting You Slide,” “Shitlist”) while celebrating them for their sheer addictive craziness (“Monster,” “This Ain’t Pleasure”). Both the minor radio hit “Pretend We’re Dead” and “Mr. Integrity” slag hipster apathy as well as indie pedantry; the latter reportedly calls out straight-edge ideologue Ian McKaye of Fugazi (“I’m not the enemy / Please don’t preach to me”).

The Aftermath
Selling just under 250,000 copies, Bricks Are Heavy cracked the U.K. Top 30 but never significantly charted in the U.S. In the heady days of the Seattle/Olympia nexus of grunge and feminist punk, L7 pointedly refused to participate in “Women In Rock” articles. “To create genre out of gender is just horrible to me,” Jennifer Finch told Rolling Stone. “There was the girl-band thing, there was the Seattle-band farce, there was the grunge-rock thing,” Sparks told writer Renée Crist. “We’ve been around longer than all that stuff. Basically, were a rock band from Los Angeles.”

Still, the Seattle/L.A. mix of DNA was unavoidable: Before L7, Finch was in a band called Sugar Baby Doll with Courtney Love and Kat Bjelland of Babes In Toyland. Love and Nirvana frontman Kurt Cobain reportedly became “Kurtney” at an L7 Concert in 1991 at the Palladium. (They compared cough syrups, then wrestled.) And Nirvana bassist Krist Novelselic would make a 1999 documentary about L7 called The Beauty Process. But the band did not eschew the era’s D.I.Y. activism, participating in benefits for Bosnian rape victims and a pro-choice rally in Washington D.C. In 1992, they were named Feminists of the Year by the Feminist Majority Foundation for starting the pro-abortion rights organization Rock For Choice.

Unfortunately, the band’s chart momentum stalled despite a strong follow-up record and a prime slot on the 1994 Lollapalooza tour. After a couple more albums and an appearance in a John Waters film (as a band called, ahem, “Camel Lips”), the band was dropped by its label. Finch and Sparks formed other bands and collaborated with their mutual idol Joan Jett. The song “Shitlist” popped up in Oliver Stone’s Natural Born Killers. Though they resisted simplistic “chick rock” labels, their sound and attitude would be taken up by bands like My Ruin, Kittie, Betty Blowtorch, and Texas Terri and the Stiff Ones, as well as a new generation of self-aware young women: “L7 has more balls than all of my ex-boyfriends put together,” wrote a reader in October 1993 issue of SPIN.

Signature Tracks
“Diet Pill” – Beginning with the plop-fizz of Alka Seltzer dissolving in water, this domestic-goddess lament (“Calgon can’t take me away”) is anchored by a bone-crunching rhythm section and Sparks’s she-witch vibrato.

“Everglade” – A remarkable character study of a young punk girl hissing to a drunk redneck in the mosh pit: “Don’t cross my line.”

“Pretend We’re Dead” – The ladies’ chilly tandem vocalizing on this anti-singalong recalls, perversely, the Shirelles or the Dixie Cups.