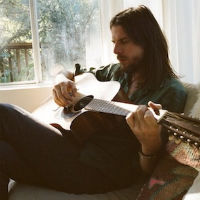 Born and raised in North Carolina, Jonathan Wilson made his way to Los Angeles when he was nineteen, hoping to make it big with his bandmates from back home. That didn’t happen but Wilson stuck around and became a musician’s musician, making nouveau folk-rock reminiscent of the Woodstock generation. He’s been popular overseas for years but in L.A. he is first and foremost known for revitalizing the Laurel Canyon music scene, the neighborhood that was home to Joni Mitchell, Frank Zappa, and Jim Morrison, among others, during its musical heyday in the late 60s and 70s. While he lived there from 2005 to 2010, Wilson organized backyard jam sessions where Elvis Costello and Graham Nash were among the visitors.

❶ With the release of his third solo album, Fanfare, on October 15, Wilson is aiming to broaden his audience. The record, which fuses elaborate orchestrations with singer-songwriter intimacy, also boasts musical contributions from folk rock legends David Crosby, Graham Nash, and Jackson Browne.

❷ In Laurel Canyon: The Inside Story of Rock-and-Roll’s Legendary Neighborhood, Michael Walker credits Wilson’s jam session with rebooting the Laurel Canyon scene—though it wasn’t a calculated move. “I didn’t move there to siphon off of a dead skeleton,” Wilson says. “I moved to Laurel Canyon because I needed a place to park my truck and set up a studio. The rest was kind of a fluke.”

❸ Wilson started the jam sessions with his good friend, Black Crowes frontman Chris Robinson. “Every Wednesday, I would send out a text telling people it was happening,” Wilson explains. “Then someone would write back, ‘The Wallflowers are in town’. Next thing you know, they’re jamming at my house.”

❺ Unfortunately Wilson’s landlord wasn’t terribly pleased with the revitalized jam scene. “I was evicted in 2010. The landlord actually used articles about our jams from Spin Magazine and Rolling Stone as evidence against me.”

❻ These days Wilson parks his truck in Echo Park. Fanfare was recorded in his home studio there. “People look to me for psychedelic stuff and I certainly bring that on Fanfare. There are some mellow tunes too, but I like to crank it up and move around some energy.”

❼ Patrick Sansone from Wilco, who also performed at the jam sessions, arranged the strings on the album. “He knocked it out of the park,” Wilson says. “When I heard that, I decided on the title Fanfare.”

❽ “Fanfare is the first album I have done a proper campaign for in the U.S.,” Wilson says, but he has had plenty of experience promoting his music in Europe. “Foreign journalists always ask me about Laurel Canyon. They think there are coffee shops and studios and things happening there. They don’t always get that it’s just a neighborhood in the city.”

According to David Crosby, the New Doc About His Life Is “Not Bullshit”