Home Uncategorized Hot Ticket: Silence of the Lambs, The Musical 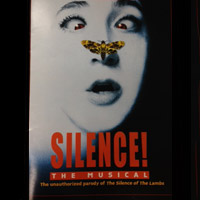 With last week’s splashy Book of Mormon debut, it would be easy to overlook Silence! — the other filthy, irreverent musical that’s storming Los Angeles stages. Thankfully, we didn’t.

An unauthorized spoof of the 1991 thriller The Silence of The Lambs, Silence! started as an internet musical then moved to off-Broadway, where it’s had a succesful running since 2011. The L.A. production, which opened Sep. 8 at the Hayworth Theatre near MacArthur Park, stars Christine Lakin as Clarice Starling, that well-scrubbed, hustling rube who suffered all those tedious sticky fumblings in the back seats of cars so she could eventually make it to the FBI. Veteran stage actor Davis Gaines, who has performed the title role in Andrew Lloyd Webber’s The Phantom of the Opera more than 2,000 times (talk about commitment to a bit), co-stars as her nemesis, the brilliant serial killer Hannibal Lecter. The rest of the film’s characters also show up: preening warden Dr. Frederick Chilton, Barney the prison guard, senator’s daughter Catherine Martin, and, of course, amateur lepidopterist, seamstress, and murderer Jame Gumb. The talented, high-energy cast totally sells the concept, but the real stars of the show are the songs.

Stuffed with visual gags, pop-culture references, and amusing choreography, the songs are so hilarious, you might wonder why Jonathan Demme didn’t go the musical comedy route in the first place. Possibly because a song like “I Can Smell Your @#$!” (that last word is an unprintable female body part), a perverse love letter from Hannibal to Clarice, would eliminate the possibility of an R-rating. Still, Baltimore really can be a great town, if you have creepy Dr. Chilton as your singing, tap-dancing guide. Even the movie’s most underused supporting character, fellow FBI rookie Ardelia Mapp, finally gets her turn under the spotlight — and what a glitzy turn it is. Just remember, it puts the lotion in the basket or it gets the jazz hands.