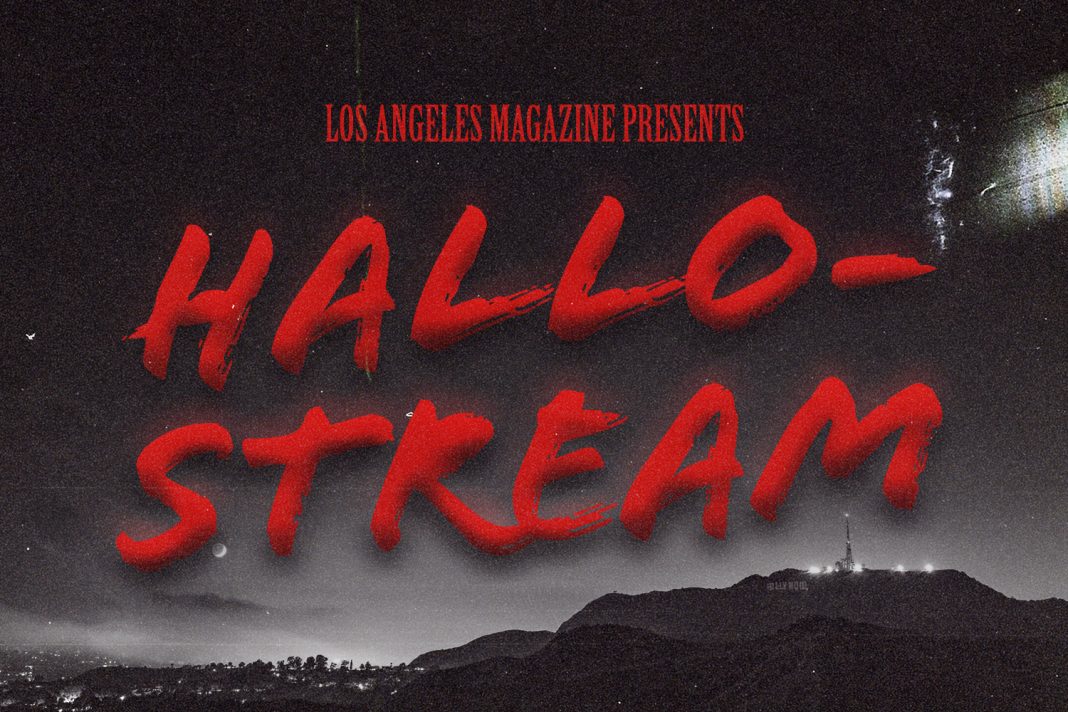 Spooky season is upon us, which means we’ll be watching horror movies even more than usual. Think you can handle a scare a day? We have a suggestion for each and every day in October, based on a weekly theme (and what’s currently streaming, of course).

Each week, we’ll release a new, themed watch-list, so check back every Thursday for more blood-curdling suggestions. Stream (and scream) away. Want to share your thoughts on the films? Join our #hallostream team on the @lamag Instagram.

Seven movies that will make you think differently about your cozy home. 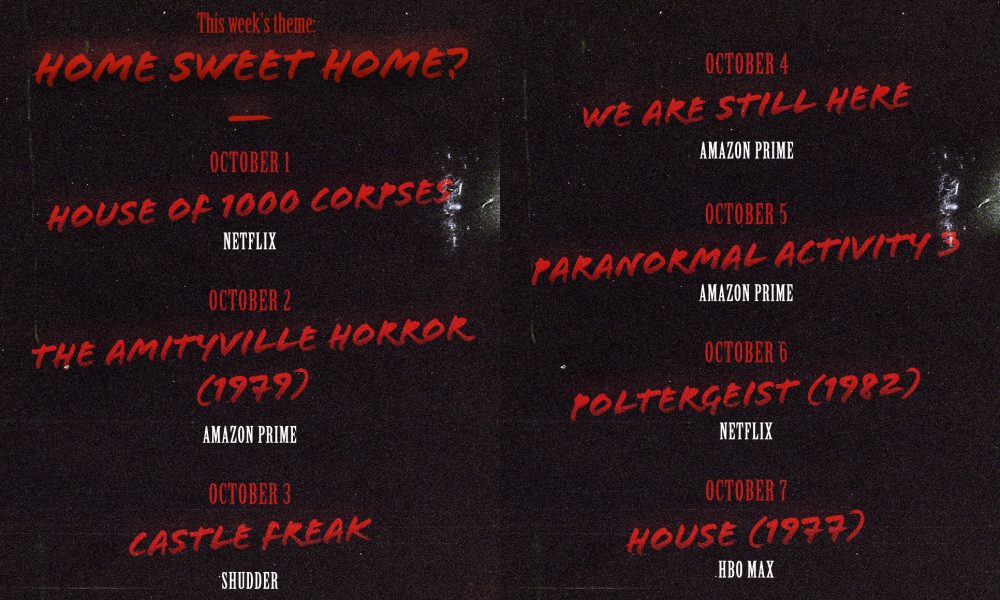 The first installment in Rob Zombie’s Firefly Trilogy is every bit as gross, disturbing, and hilarious as it was when it came out in 2003. Captain Spaulding delights (RIP Sid Haig). Dr. Satan terrifies.

This “true” story of the Lutz family’s brief tenancy at a Long Island house with a dark past will make you rethink the charms of Dutch colonial homes by the bay. James Brolin is truly menacing as a patriarch possessed.

Ten years after 1985’s Re-Animator, horror master Stuart Gordon sends horror icons Jeffrey Combs and Barbara Crampton to an Italian castle with an unsavory something in the basement.

A couple (Barbara Crampton and Andrew Sensenig) mourning the loss of their son find they’re not alone in the New England farmhouse where they were hoping to find peace.

This threequel sends viewers back to the 1980s with sisters Katie and Kristi, the former of whom we met as an adult when she and boyfriend Micah were tormented by a malignant entity in the first installment. Controversial opinion alert: Paranormal 3 is by far the best of the franchise.

Tobe Hooper directed this chiller about a family victimized by evil entities inside their unassuming new home (of course, also by careless capitalists and their relentless suburban sprawl). If you saw it as a kid, you’re still scarred by a certain doll in Robbie’s room.

An evil house starts gobbling up school girls in this Japanese horror-comedy classic that’s as weird and wonderful as it is visually stunning. 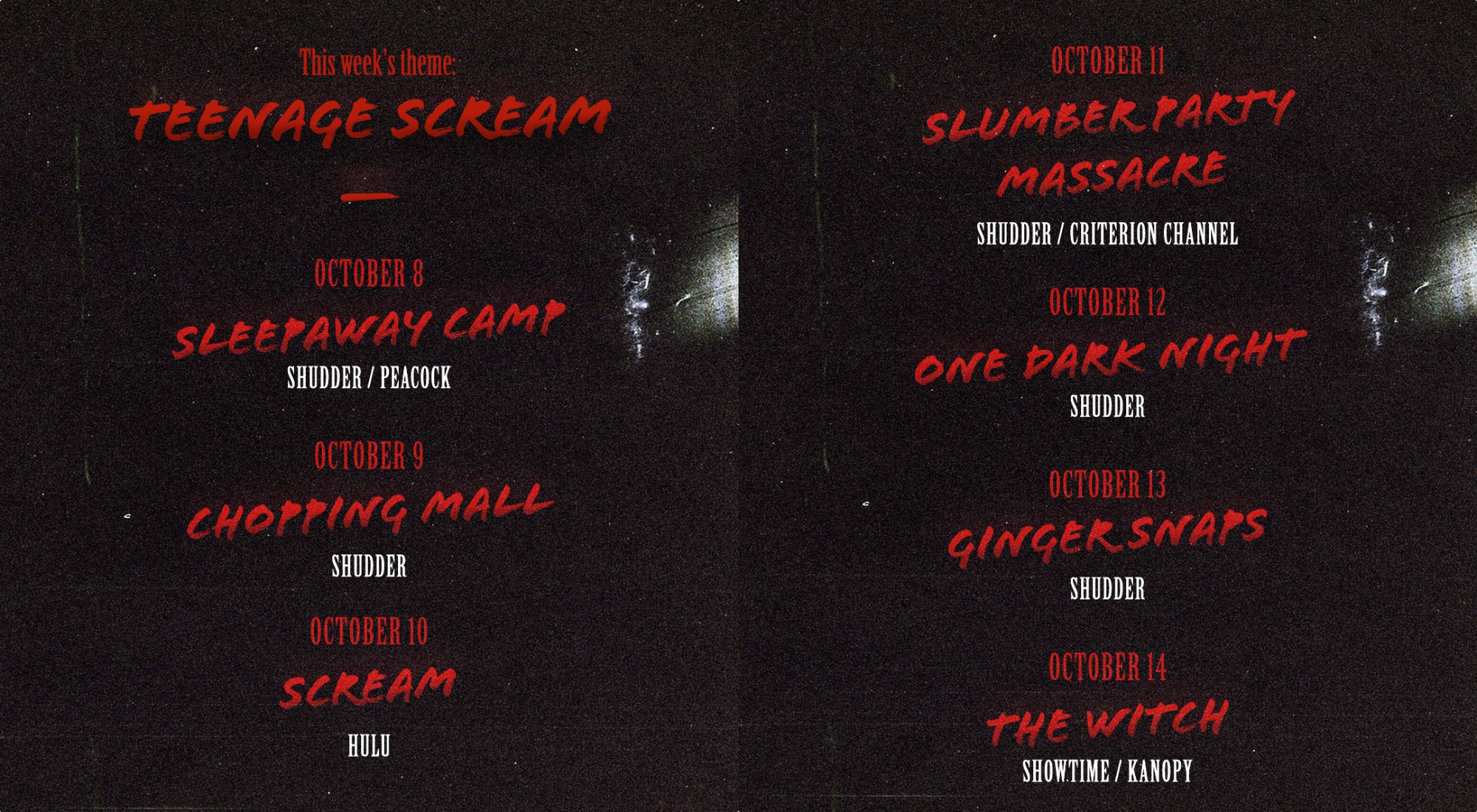 If it feels like summer camp-set slashers are a dime a dozen, Sleepaway Camp will prove you wrong. Grotesque and delightful through and through, it also has one of the most outrageous endings in horror history.

Long before shopping malls really did have robot security guards, Chopping Mall imagined the tech running amuck when a group of teens get locked in their local galleria overnight. (Fun fact: While the Beverly Center was used for exterior shots, the movie was actually filmed at the Sherman Oaks Galleria.)

Teenage girls being terrorized by a killer with a power drill might sound a little on the nose, but this is one of the genre’s few woman-directed offerings.

Feel like you’ve forgotten how mean teenage girls can be? This is a scary reminder. But the bullies get more than they bargain for when they make a friend stay the night in a mausoleum.

Teen girl gets her period and literally turns into a dangerous creature. Adolescence metaphors at their bloody finest.

Teenage Thomasin’s superstitious, puritanical family turns on her after a series of misfortunes befall them. Luckily, a goat named Black Phillip has options for her.

Week Three: We Are the Monsters

Horror movies are great at cutting social commentary, and these do a great job at mining our anxieties about the human race and American society.

Jordan Peele’s fantastic follow-up to Get Out can be (and has been) interpreted a lot of ways, but there’s something very telling about doppelganger Red telling her other, “We’re Americans.”

Ready your barf bag. This delightfully gross commentary on classism in America takes body horror to another level.

In the grand tradition of zombie movies, Danny Boyle’s 2002 foray proves the living can be just as scary as the dead.

This remake of George Romero’s commentary on mindless consumerism sends the undead to the mall. The 1978 original isn’t currently streaming, but it’s worth seeking out too.

Yeon Sang-ho’s 2016 zombie thriller about an outbreak on a train might hit all little too close to home in the middle of a pandemic, but it’s a must.

Sightless freaks terrorize a group of spelunkers, but the deeper underground they go, the more human drama is dredged up.

Week 4: Masking for It

These movies about masked maniacs will almost make you forget that unmasked people are the scary ones these days.

A murderer in a translucent mask and yellow raincoat runs amuck in this supremely weird and timely (unfortunately) commentary on religious fanaticism.

An obsessed doctor, father of a disfigured daughter, is the baddy in this French classic. Still, Christiane’s mask is creepy as hell.

Psychopaths in animal masks learn the hard way that you should never underestimate a woman raised by survivalists in Adam Wingard’s gory-fun 2011 thriller. (And be ready to have this song stuck in your head.)

October 25: The Texas Chainsaw Massacre (1974) — Shudder and The Criterion Channel

Meet the Sawyers. Leatherface is excited to have you for dinner.

No one hates staying dead more than Jason Voorhees. The hockey mask-clad murderer rises from the dead to terrorize Forest Green (formerly Crystal Lake) in this sequel.

Mark Duplass is incredible in this horror about a Craigslist deal gone wrong. And wait till you meet Peachfuzz!

A painted William Shatner mask becomes an icon of horror in this John Carpenter classic.

We’re wrapping up the month with three great horror franchises, including one that’s managed to produce seven films in as many years. Not every one is a winner, but all in all, you’ll get some scares.