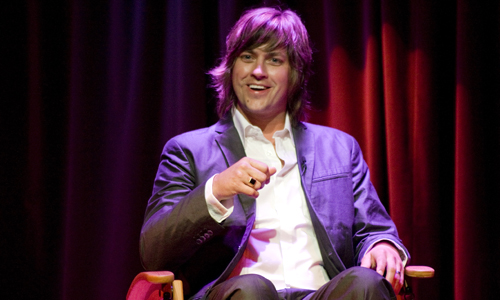 On Wednesday night the Grammy Museum hosted Old 97’s singer-songwriter Rhett Miller for The Drop, a new and ongoing series featuring musicians in conversation with museum curator Ken Luftig Viste in front of a small audience.

It didn’t have the dramatic set or star wattage of Elvis Costello’s Spectacle (Miller freshened up in the lobby restroom, pre show), but the discussion and mini concert—which doubled as the unofficial L.A. release party for Rhett Miller, his fourth solo album—had everything a claustrophobic music lover like me could wish for: Miller opened up about the ups and downs of his three-decade-long (!) career; there were funny, off-the-cuff moments that had everyone laughing (that girl who inspired “I Need To Know Where I Stand” did what mid make-out sesh?); and there were seats—the no-bad-seat-in-the-house kind—that took the physical work out of being a fan.

Best of all was Rhett’s post-chat performance. Taking requests from the audience (“Hopefully I’ll know what you want to hear—these songs are new!”) he moved through “Caroline,” “Haphazardly” and “Our Love,” gaining energy as he upped the volume, his teen heartthrob-worthy hair flying around his face.

Booze would have been nice (Yes Rhett, you should have brought some for all of us) but I walked away wanting to put my copy of The Instigator back into rotation, and eager to check out the museum’s other programs.

Miller will be performing with the Old 97’s at the Music Box @ Fonda on July 8. Check here for upcoming events at the Grammy Museum.