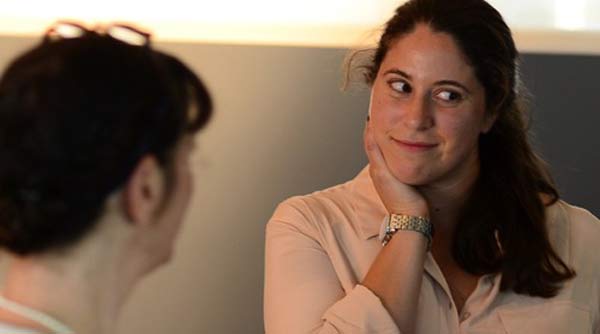 Awkward, short, and sexually frustrated—it’s the perfect trifecta for Little Horribles, an amusing, painfully honest Web series that launched in late May. Created and written by Los Angeles-based director/writer/producer Amy York Rubin, who also stars as the 30-something lesbian protagonist, Little Horribles chronicles the triumphs (or lack thereof) of daily life in Los Angeles. Rubin targets triviality, the small and often overlooked moments that feel all too relatable. With just two episodes released, Little Horribles has already been described as the lesbian equivalent of Girls thanks to its honesty, its dry wit, and its self-indulgent female lead.

In the first two episodes Rubin’s character wades through an awkward morning-after with a hyper-emotional woman and addresses her coworkers LOL-abuse on Gchat. It’s part of a recent surge in gay and lesbian Web series including the popular New York-based series Anyone But Me written and created by Susan Miller and Tina Cesa Ward and The Outs written and created by Adam Goldman. But Rubin is quick to point out that Little Horribles shouldn’t be tagged as a “lesbian series.” Rather, the show is a blend of realistic, alternative perspectives featuring people not usually seen on TV.

We’re looking forward to more cringeworthy sex scenes and unpolished tirades as Little Horribles tackles the minutiae of daily life with brutal honesty and hilarity–sometimes it’s hard to tell which is which.

What has been your inspiration for the show?
My inspiration was moments in my own life where the minutiae of everyday interactions trip you up. I’m not dealing with any big horribles, like global hunger or anything, these are little horribles where the person experiencing them feels shitty but most everyone else doesn’t even notice. Plus, I’m lucky enough to have a vast canon of experiences where I look like a total ass, so I tend to pluck from that for inspiration.

There’s been a wave of Web series coming from New York. Why did you set Little Horribles in LA?
Well, I live in LA; I moved from New York, so it’s more practical to film in my own backyard, literally. I also think there’s something really interesting about the L.A. cultural scene, especially the whole lez world in Silver Lake and Echo Park. I’m still figuring it out. I don’t have any tattoos and I’m just a tad too high-energy–a bit too much of a loud asshole. But I love L.A. so much and I like the dynamic and contradiction of that personality in L.A. for the show.

Little Horribles has been called the lesbian Girls. What’s your inspiration for the show? Is Lena Dunham an influence?
I’m very much a fan of “Girls.” I think that she [Lena Dunham] pushed boundaries that needed to be pushed. I was definitely inspired and motivated by her boldness and ability to nail these little nuggets so honestly. I definitely have a different voice and different perspective. My characters are also at a very different place in their lives: not so fresh out of college and wide-eyed but still making lots of bad choices.

How long have you been working on the show?
I started writing episodes about 10 months ago, but since I didn’t raise money to produce the show–I just boot-strapped it on my own–I didn’t have the freedom to drop everything else and just make episode after episode. Instead we filmed as we could, between income-earning work, and took our time with it. I have a ton of future episodes written and a pilot in my back pocket, and we’ll continue to film and develop the show over the next few months.

How many episodes have you filmed?
We’ve filmed six episodes so far and I plan to shoot as many more as I can. We’ll shoot a bunch more over the summer, and continue to look at different opportunities to expand the “Little Horribles” world and characters.

How similar is your character to your actual personality?
It’s definitely not a documentary. I’m not thaaat much of an ass. Everything is pulled from my own perspective and experiences but it’s not verbatim. Lots of times it’s more of a feeling that I experienced or a component of a situation that occurred in real life, but then I blow it up to make it funnier and more in-line with the character. Part of what I love about that process is that I definitely write what I wish I had done or what I was thinking in my head at the time but was too much of a wuss to actually do.

Adam Goldman, who created the hit Web series The Outs, said he was motivated to fill the void of shows with gay story lines. Did you feel similarly while creating Little Horribles?
It’s definitely something I talk and think about constantly, probably too much. It sucks not to see your own experiences, some of your most precious and intimate experiences, reflected back to you in the stories you see on screen. Clearly, most media is made up of straight people and straight story lines. It wasn’t necessarily an inspiration creatively, but it’s definitely something I care a lot about. It’s just asinine to me that of all the various forms of media we consume there are slim to no lesbian or queer leads and relationships playing out on the different screens. It just seems weird at this point. I’m definitely interested in pushing the boundaries of identity in general. I think more and more people aren’t 100% straight or a 100% gay; they define themselves in a million different ways. I’m really interested in trying to explore that with the characters, and you’ll see that this isn’t a “gay show” but really just a show with different, more inclusive and diverse identities.

Future plans?
I want to keep writing, directing and creating content I like, whether it’s for TV, film or the web. With “Little Horribles,” I’d like produce more episodes and possibly develop it for TV. More generally, I’m a little obsessed with how the industry and the way we consume media and entertainment is changing. I hope to just be a part of that shift in a positive way. I think there is a lot of opportunity right now to push boundaries with the content we create, especially in comedy and that’s what I want to do. It’s a really exciting time to be in this space, both developing content for new audiences and defining a new way to produce and distribute it.