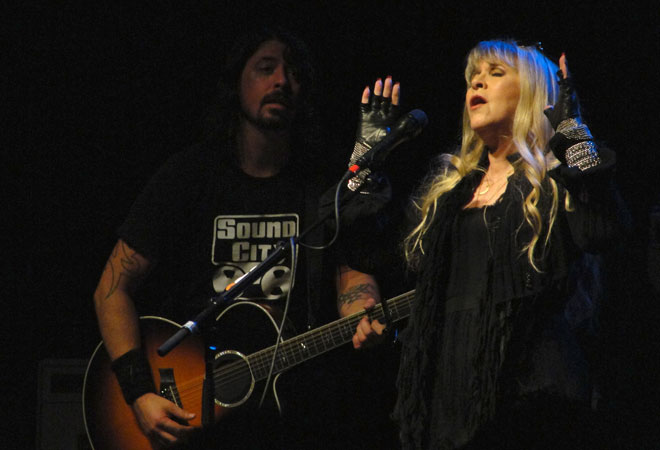 The rock stars aligned at the Cinerama Dome on Thursday night for the red carpet premiere of Dave Grohl’s Sound City, a documentary about Sound City Studios and, more importantly, its Neve 8028 soundboard. When the Foo Fighters frontman, who purchased the board after the digital age crushed its relevance, delved into the story he found too much material to fit into the 12-minute short he originally had planned.

“Big hats off to Dave. Big kudos,” said Butch Vig, producer of Nirvana’s Nevermind, after the premiere. “He really, really believes in what he’s talking about in the movie: what it is to be human and make music, talking about how records were made back in the ‘70s and ‘80s and ‘90s versus digital technology. The great thing about it is that you can understand that going to see this movie even if you don’t know anything about music.”

For those who do, including Grohl and the Sound City regulars he rounded up to record new music for the film, the highlight was the celebration that followed the film’s premiere: a three-and-a-half-hour, 38-song gig from the Sound City Players at the sold-out Hollywood Palladium.

“Ladies and gentlemen, we’re gonna be here a while, just so you know,” Grohl yelled from stage, deferring to the screens that played documentary clips introducing each Sound City Player. They treated the audience to classic tracks as well as contributions to the film’s original soundtrack, Sound City: Real to Reel. The night’s lineup read like rock ‘n’ roll history with Grohl and fellow Foo Fighter Taylor Hawkins joining forces with Pat Smear to serve as the backing band to Brad Wilk of Rage Against the Machine, Queens of the Stone Age collaborator Alain Johannes, Chris Gross of Masters of Reality, Robert Levon Been of Black Rebel Motorcycle Club and Lee Ving of Fear.

Punk rock turned into classic rock sing-alongs as Grohl brought out Corey Taylor of Slipknot, Rick Nielsen of Cheap Trick and Krist Novoselic of Nirvana for a run of Cheap Trick songs including “Hello There” and “Surrender.” Rick Springfield thrilled everyone’s inner karaoke star by ending his set with “Jessie’s Girl,” while an equally thrilled Grohl ribbed the audience about recognizing the tune in barely three chords.

It was hardly a surprise that the pinnacle came from the pure enthusiasm of Creedence Clearwater Revival’s John Fogerty, who helped the audience forget their now-aching backs the moment he shouted the opening lines of “Travelin’ Band.” Fogerty couldn’t stop grinning as the Foo Fighters beefed up Creedence classics “Born on the Bayou,” “Bad Moon Rising,” “Proud Mary,” and “Fortunate Son.”

“The musicians here are beautiful people, and we all got something in common,” Fogerty said of their Sound City connection, turning to point at Grohl. “But they left out one little thing. What we got in common is we all love that guy right there.”

Just when it looked like an all-male cast would dominate the night, the Sound City Players made way for the final guest, Stevie Nicks, offering “Stop Draggin’ My Heart Around,” “Dreams,” and “You Can’t Fix This,” newly written about her 18-year-old godson who overdosed at a frat party. Heartstrings didn’t get a break as Grohl picked up an acoustic guitar for “Landslide,” received in silence by the crowd of 5,000. The Foo Fighters joined Stevie Nicks for an epic, 10-minute, cross-generational collaboration on “Gold Dust Woman” to close out the night.

On both stage and screen, Grohl succeeded in showing us what’s special about the way music is made and he did it in a way that was accessible. Sound City doesn’t slam the digital; instead, it lauds those who use it as an instrument all its own, like Trent Reznor of Nine Inch Nails. What we’re left with is Grohl’s earnest mission to preserve the soul of rock ‘n’ roll not through ProTools but by recording live, with all the vulnerably, drama, and brilliance of human imperfection.

Read more about Sound City from the nicest guy in rock ‘n’ roll himself.