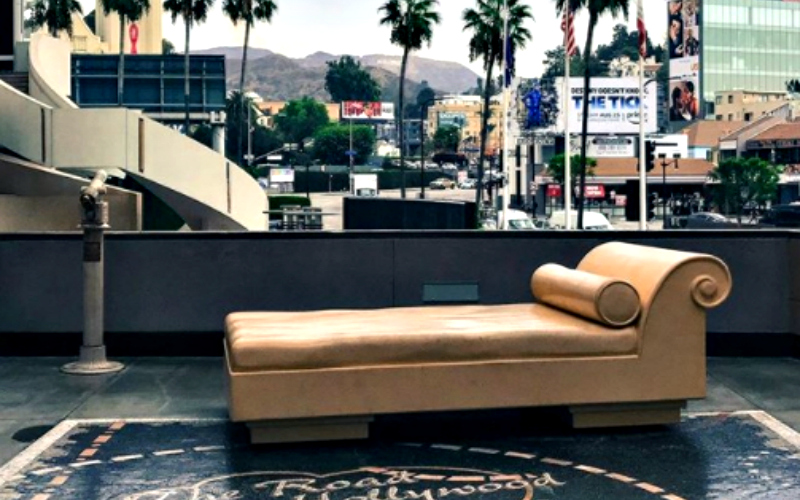 If you’ve stopped by the Hollywood & Highland shopping center lately, you may have noticed something missing. The floor of the mall features an installation, “The Road to Hollywood,” that once ended at a fiberglass sculpture, often referred to as a “casting couch.” The couch was located on a second-floor balcony. Amid the recent Hollywood sexual harassment scandal, the couch has been quietly removed.

Representatives from the mall’s management told the Los Angeles Times that, “In light of current events we have deemed this component of ‘The Road to Hollywood’ to be insensitive and it has been removed from public display.”

“The Road to Hollywood” was created by local artist Erika Rothenberg—known for work that engages with provocative and political subjects, often from a feminist perspective—who told the Times she did not intend the sculpture as a “casting couch” in the lurid connotation of the term, but rather as a “daybed” on which visitors could sit and think about the dreams of would-be Hollywood stars. (As recently as September 24, Hollywood & Highland itself referred to the installation as a “casting couch” in a now-deleted Instagram post.) The rest of the mall-spanning work is comprised of a cement “red carpet” up the entry steps and a series of quotes embedded into the floor from those who have made it in the film industry. Nonetheless, with the misconduct of Harvey Weinstein and other powerful men in the industry in the news, the couch took on a very different implication for some viewers. Melissa McEwan, of the influential feminist blog Shakesville, wrote about the growing concerns around the sculpture, and rallied for protest against the couch. McEwan writes that she called Hollywood & Highland management in mid-October to discuss removal of the piece, which she interpreted as an acknowledgement of harassment and rape culture in the entertainment industry. Shortly thereafter, the couch was taken off display.

The artist Rothenberg is understanding of how recent news changed the perception of her work. “I get it,” she said to the Times, “Abuse by the powerful is real.”

RELATED: The Hollywood Exec and the Hand Transplant That Changed His Life

Mr. Incredible and Batgirl Got into a Brawl