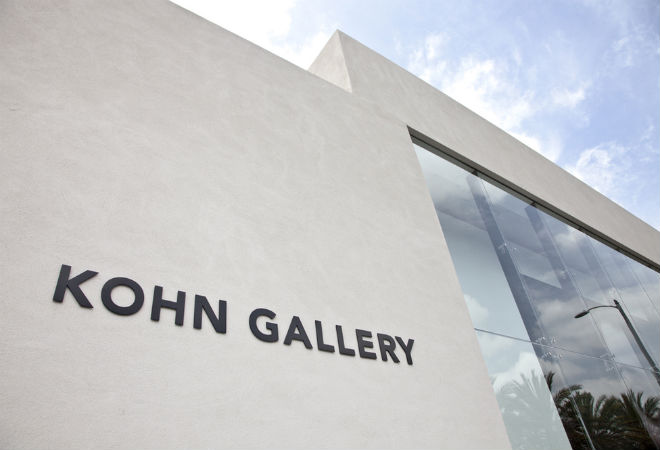 Michael Kohn is a busy man. For the past year, the onetime art critic and magazine editor whose Kohn Gallery has been a mainstay on the Los Angeles art scene since the ‘80s has been prepping for the opening of his new and improved space. After 14 years at the corner of Beverly and Crescent Heights, he decamped for a larger venue on Highland near Beverly. The first show, Mark Ryden The Gay ‘90s: West, opened this past weekend. Kohn has represented the artist, known for his pop surrealism since 2005, but this is Ryden’s first L.A. exhibition since March 2007.

Kohn is the latest gallerist to make a beeline for Hollywood, where commercial property is often more affordable than it is on the Westside. After 25 years in Santa Monica, Shaun Regen moved Regen Projects to a spot on Santa Monica Boulevard between Highland and Las Palmas two years ago. Redling Fine Art has been located in Hollywood since 2007. And until Perry Rubenstein went into bankruptcy in March of this year, its L.A. outpost was located on Highland between Fountain and Lexington.

We spoke with Michael Kohn about why he made the move to Hollywood, how building a gallery space from scratch is just as hard as it sounds, and what L.A. art lovers can expect at Kohn Gallery.

★ The first and foremost reason for moving the gallery is that Kohn has always wanted to own his own building. “Would I have moved to this part of Hollywood 25 years ago? Probably not,” he says.

★ “I needed to be in proximity of my clients and that was usually West Hollywood where a number of galleries established themselves in the 80s.” With the advent of the internet and the popularity of art fairs, geographical location has become less important.

★ “Last time we had a show with Mark Ryden seven years ago, 2,500 people showed up,” Kohn says. “I thought opening with a show of his work would be a good way to get the public to know where I am.”

★ The gallery, which was designed by Malibu-based architect Lester Tobias, who also designed a previous gallery of Kohn’s, boasts 12,000-square-feet of exhibition space with 25-foot ceilings, a main space designed for monumental sculptures, and digital film projectors that will eventually be available in every room of the gallery.

★ The latter is important because “We also represent the estate of Bruce Conner whose films are tremendously important in his work,” Kohn says. “We will be premiering a number of his works here. We have an incredibly dramatic way of doing that, which I think he would have appreciated.”

★ What’s Kohn’s favorite thing about the new space? “The main gallery room. It’s a perfect space. It reminds me of a museum. It’s grand yet somehow each wall of the room feels intimate.”

★ What’s Kohn’s second favorite thing about the new space? “I have my own bathroom now.”