Home Theater Holland Taylor Dishes on the Role of a Lifetime and Celebrating Pride... 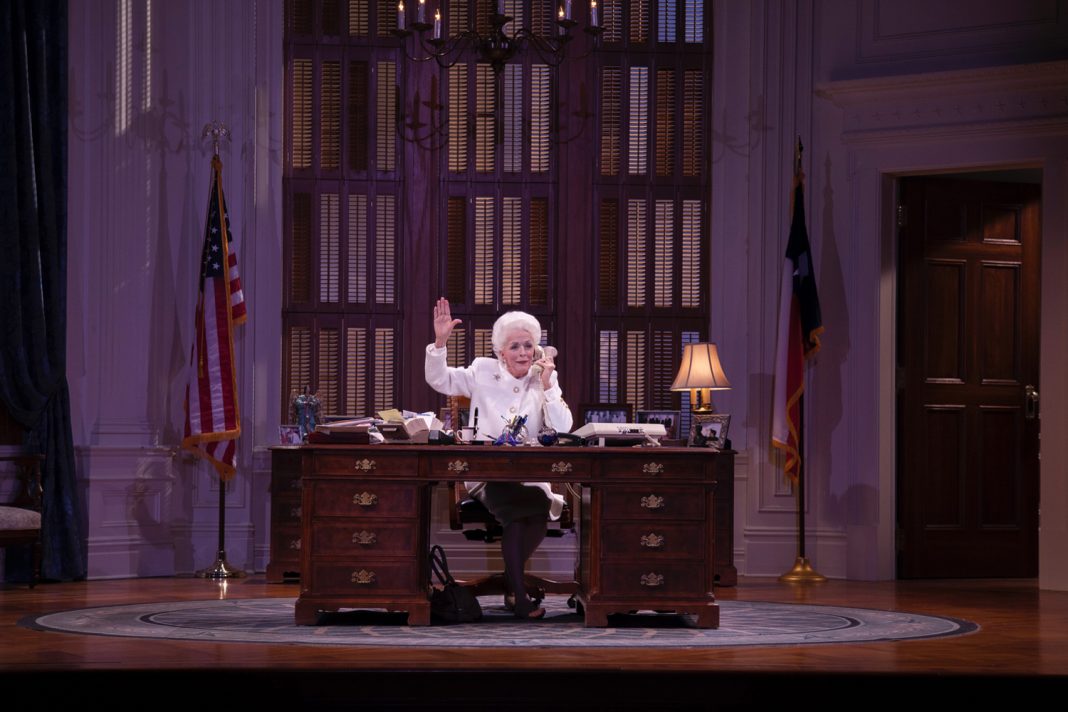 When it comes to Pride, Holland Taylor isn’t too worried about the lack of a parade and other big group festivities this year. “I celebrate with Sarah every day and am grateful we’re in a society which is growing up,” says the 77-year-old, whose partner is fellow actress Sarah Paulson.

Taylor, best known for playing serial-marrying mother Evelyn Harper on Two and a Half Men, has been keeping busy while homebound, using Marco Polo and FaceTime to stay in touch with friends and family.

“I’m much more mindful of my community than I usually am,” she says. “I’m trying to be very positive about it all.”

She’s also been preparing for the revival of her one-woman play, Ann, about celebrated Texas Governor Ann Richards, at the Pasadena Playhouse. Originally set to open in late May, it’s been postponed indefinitely, but viewers can watch Taylor in the part on PBS this month: A 2013 production of the play in Austin, Texas, is streaming as part of the channel’s Great Performances series.

“It’s the work of my career,” Taylor declares of the role that she wrote and first played in Galveston, Texas, in 2010. “The past 13 years of my life have been informed and shaped by it.”

Richards was a liberal who, after two terms as state treasurer, became governor of the Lone Star State in 1990, only the second woman in Texas history to do so. Known for her brassy personality, wicked wit, and down-home plain speech, her keynote address at the 1988 Democratic National Convention catapulted her onto the national stage. At that event she derided then-Vice President George H.W. Bush, saying, “I’m delighted to be here with you this evening because, after listening to George Bush all these years, I figured you needed to know what a real Texas accent sounds like.” She then followed with: “Poor George, he can’t help it. He was born with a silver foot in his mouth.”

Taylor was a fan of Richards from afar, and met her only once in the early aughts when they were brought together by a mutual friend, New York Daily News gossip columnist and Texas native Liz Smith.

“She was exactly like one’s most beloved aunt: wonderful, very salty, could be very tough on people, did not suffer fools, and was deliciously funny,” Taylor recalls of Richards. “I told her two jokes, a story that made her laugh and a joke that made her laugh, and I don’t think I’ve ever been so gratified in my life. If you did something that tickled Ann Richards, there was no reward greater on Earth.”

When the former governor died of cancer in 2006 at age 73, the actress was surprised at the degree of mourning and despondency she suffered, as if there was some deep personal connection. She decided to channel her feelings into telling Richards’s story on-screen. But while driving to work for Two and a Half Men, it struck her–this project is for the stage. She pulled over, and the scenario, structure, and time line came together in her imagination.

“I sat there on the service road by Barham [Boulevard], and it flooded my head,” she says. “Ten minutes later I started up the car again and went to work—never looked back.” Instead of reupping on the hit CBS sitcom, she settled for occasional appearances and funneled her time and effort into Ann.

After its Galveston premiere, the show went on to Austin, Chicago, and Washington, D.C., before hitting Broadway in 2013, though some had reservations about mounting such a seemingly political piece on the Great White Way.

“A lot of Republicans and conservatives who were normally theater investors were not interested in investing for the stated reason they didn’t want to do a story about a liberal hero,” says Taylor, who received a Tony nomination for her performance. “[It’s] funny because if you see the play it’s not remotely political.”

Had Richards chosen to run for president, Taylor believes the governor might have had a pretty good shot at becoming the country’s first woman to win the White House. She thinks Stacey Abrams will be a serious contender in 2024 or 2028. “She’s an amazing person,” Taylor says of the 2018 Georgia gubernatorial candidate. “If you want something done, get a woman to do it.”

My LA to Z: Corey Fogelmanis