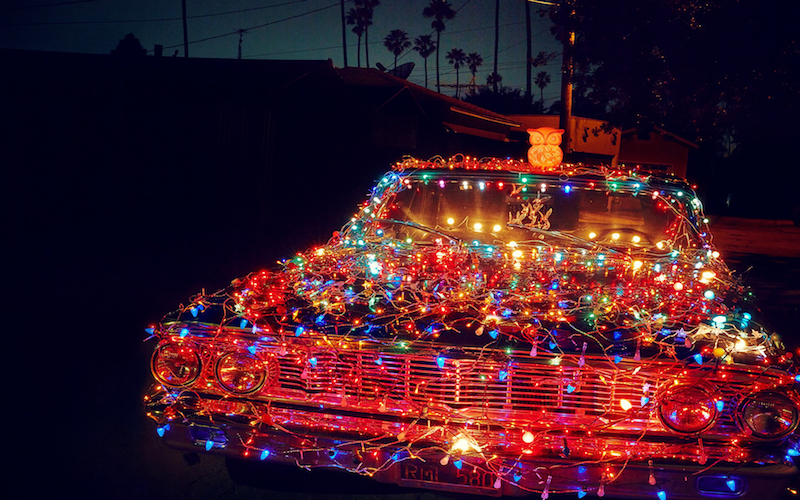 Not everybody greets the holidays with the same degree of enthusiasm. Maybe you’re ready to wassail your butt off, or maybe you’ve already hit your limit of eggnog and good cheer. Either way, one thing’s for sure: There’s probably an event on this list that speaks to how you’re feeling right now, whether naughty or nice.

The Walt Disney Concert Hall
December 9, 2 p.m.
The Festival of Carols is promoted as being for children (over six), but when it comes to Christmas, aren’t we all basically children (way over six)? Apparently, the lines to meet composer Eric Whitacre have been three times as long as those for Santa. Tickets are almost sold out, so hurry if you want to hear some of your favorite classic carols—including “O Holy Night,” “Joy to the World,” and “Rudolph, the Red-Nosed Reindeer”—sung by the Los Angeles Master Chorale. It definitely beats another rotation of “I Want a Hippopotamus for Christmas” on KOST 103.5.

Altadena (at Santa Rosa and Mariposa)
December 9, 6 p.m.
The Valley’s Candy Cane Lane tends to steal the spotlight, but think of the annual Altadena tree lighting as its cozier, more quaint sibling. At 2 p.m. you can head to the Arts & Crafts Festival, but the best part of the day comes about an hour after sundown, when the colorful lights, which stretch for almost one mile down historic Christmas Tree Lane (Santa Rosa Avenue between Mariposa and Mendocino), are ceremoniously turned on, illuminating a canopy of trees. Past ceremonies have included performances from local marching bands, food trucks, and of course, lots and lots of hot chocolate.

Various locations
December 16, 5 p.m.
This event is most certainly only for Yuletide enthusiasts over the age of 21. The seventh annual pub crawl will take you to locations around the neighborhood, including Ye Olde King’s Head and Plan Check. Tickets ($15) are available online, and the crawl begins at one of four various locations. Proceeds benefit the Westside Food Bank, and you are encouraged to come in costume, or at least an expository Santa hat. But please observes the same rules as private-school students and remember: The uniform is an extension of the Claus. Behave accordingly.

The Theatre at Ace Hotel
December 16, 7 p.m.
Two of our favorite things come together for this one: avuncular AirTalk host Larry Mantle is hosting a special screening of the Bruce Willis classic on the eve of its 30th anniversary. If you’ve somehow never seen the film, then rest assured that, yes, it’s a Christmas movie, but it hits more notes than just the merry ones: It’s the night before the big day when German terrorists led by Hans Gruber (the divine Alan Rickman, RIP) overtake Nakatomi plaza—really, the 20th Century Fox Building in Century City.  But a low-key favorite scene is limo driver Argyle, played by De’voreaux White, blasting Run-DMC’s “Christmas in Hollis.” Mantle will host a post-screening conversation with special guests. Tickets are $16.50.

Skirball Center
December 14, 7:30 p.m.
We can hardly overlook the Festival of Lights, which kicks off on December 12. Not only is the Skirball Center hosting a Hanukkah Festival on December 10, but a few days later you are invited to join them for a sophisticated night of, yes, whiskey and appetizers. Expect a conversation with whiskey connoisseur Dan Friedman, followed by food writer and author Leah Koenig, who developed the menu and will lead a cooking demo. Tickets are $45. Riverside Municipal Auditorium
December 22
Not everything this month needs to be candy-colored and jubilant. Los Angeles loves to scare itself silly, and with Halloween only a month in the rearview, maybe you’re still in the mood for something billed as “a naughty and creepy live-action experience” courtesy of Sinister Point Productions (the same folks behind “The Search for Krampus,” a similar event from two years ago). Twisted Xmas promises a hunt for Bad Santa, pop-up holiday-themed movie bars, carolers, and more.  Tickets are $20 (VIP goes for $44).