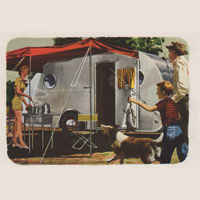 Whether it’s a sparkling silver Airstream or the busted 1986 Fleetwood Bounder used for cooking meth in Breaking Bad, the RV has a hold on the American imagination. Here is manifest destiny made practical — and sometimes stylish — for middle-class families. Vintage trailer collector Phil Noyes has taken his love for the vehicle and turned it into Trailerama, a 192-page book filled with colorful images of trailers. Culled from ads, postcard, sheet music, and more, they run the gamut from the earliest mobile coaches in the 1930s to the roving behemoths that came to dominate the market in later decades. Though rising gas prices may have cooled our collective ardor, Noyes documents the country’s still smoldering love affair with life on the road.