Home Uncategorized His Name is “Mud”: A Q&A with Jeff Nichols 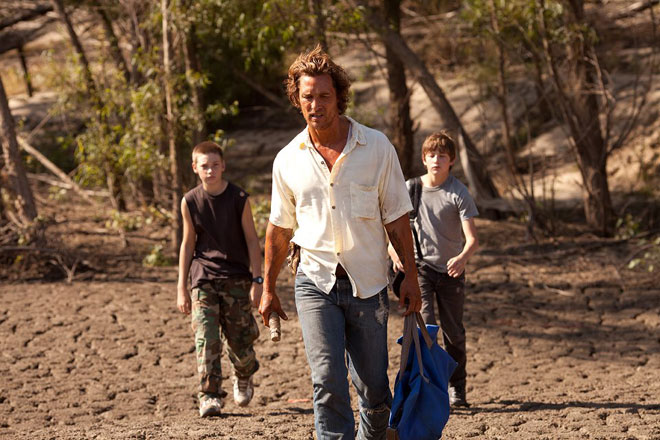 Jeff Nichols established his filmmaking career with his first feature Shotgun Stories, a modern revenge Western that takes place in his native Arkansas. (Roger Ebert called it one of the best films of 2008.) He followed that with Take Shelter, a tense drama starring Michael Shannon and Jessica Chastain. For his third film, Mud, Nichols mines familiar ground with the story of a 14-year-old boy who befriends an outlaw (Matthew McConaughey) plotting to escape with the love of his life (Reese Witherspoon). We caught up with Nichols to discuss country living, the mythology of mud, and his love for Michael Shannon’s comedic side.

All of your films have been set in rural locations. What do these open landscapes and quieter ways of life mean to you? What can urbanites get from watching?
I think they’ll get a sense that this is a realistic portrait. I try as best as I can to not make these things affectacious. Maybe I save them a plane ticket and a very muddy boat ride they’d have to take to see it. In terms of a feeling or a way of life, it’s certainly a more tempered pace. A lot of people will say the film is slow, but things move at a certain pace out there. That can’t help but infect the way my stories are told.

What came to you first with Mud, the story or the setting along the Mississippi River?
I think the setting came first on this one. I’ve been carrying this around with me since the late ’90s, since I was in college. I hadn’t really seen this part of my home state before, so I got to explore it with fresh eyes. You go down there and you see a houseboat – it looks like a trailer home built on a flotilla. I was like “Wow, my cinematographer is going to love this.” It sounds so cheesy but anywhere you turned, it was magical. We didn’t need CGI. The hardest thing every day was figuring out which pretty thing to shoot.

You wrote the role of Mud for Matthew McConaughey. Did you have a prior connection to him or were you just shooting for the stars?
I was shooting for the stars. I had to talk a few people into it. That conversation started back in 2008. I would tell people, “I’m writing a screenplay for Matthew McConaughey,” and some would say, “Why?” But I just knew he was right for the part. When I finally met him, he was exactly the guy I was hoping to meet.

Why did you choose Mud as the name of the character and the movie?
The original inspiration came from a Townes van Zandt song. He’s a country and folk music singer from the 1960s and ’70s, and he wrote a song called “Mr. Mudd and Mr. Gold.” It has nothing to do with the movie, but I was thinking about Mr. Mudd. Titles you hold out there at arm’s length. You don’t want them to be too on the nose, but you start thinking about adolescence, which is a pretty murky time. Not to mention you connect yourself with the mythology of Mississippi mud, which is a real substance. We were caked in it the entire time. It’s like Quikrete. It turns white when it dries. It’s a weird substance. Then there’s the whole idea of “My name is mud,” and that being a negative thing and this guy coming in with danger and wrongdoing attached to him. All those things seemed to work. And then, yeah, it sounded good.

This was your biggest movie to date. Do you see yourself moving on to bigger films or do you prefer smaller sets?
I do like something about smaller sets. I heard that if you showed up to a Kubrick set, there were only a few people standing around. I also hear that about the way Clint Eastwood works. His films are usually on time, and they’re usually on budget. I respect that. The problem with making a $100 million film is that a lot of people need to connect with that film. I’m not saying that I won’t ever do that or won’t ever have the right story that can bear the weight of that, but I feel like budgets need to be requisite with the story at hand. I’m not out there searching around for something intangible. That’s just not the way I operate. I don’t need a lot. I just need enough.

You live in Austin. As a filmmaker, what do you think of what’s happening there? Could it be the next entertainment capital of the U.S.?
It’s great. It feels like a nice middle ground between the coasts. I grew up in Arkansas, which is also in the middle of the country. Austin has big city amenities and a small town feel to it. But no, I think that L.A. has their hands around the neck of that particular beast. I don’t think that’s even Austin’s goal. How could it be? Austin is an energetic place, a creative place, and I’m benefiting from that, but in terms of infrastructure you would pick New Orleans or Shreveport or Baton Rouge before you’d pick Austin.

Michael Shannon, who has been in all three of your films, starred in an amazing Funny or Die video this week. Was that your idea?
No, it wasn’t. That’s hilarious. I can’t wait to tell Mike somebody asked me that. It’s so funny, but I don’t know if that was his idea or if someone at Funny or Die called him. I think he’s a really funny guy, but it’s a very particular kind of sense of humor. I want to make a comedy with him really badly. Maybe now we could sell it.