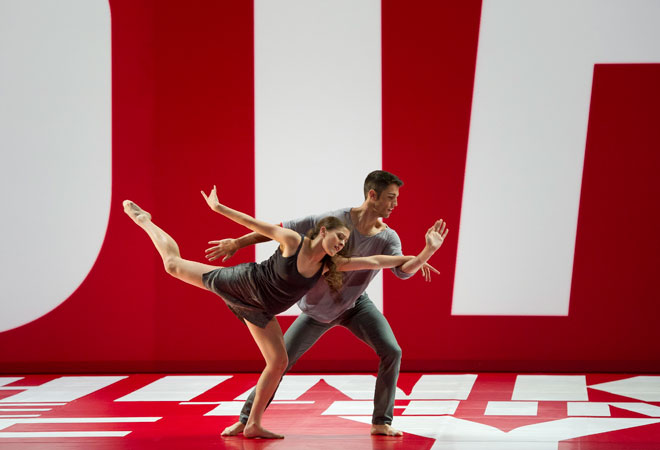 There’s been so much buzz about the new Ace Hotel downtown—no wonder L.A. Dance Project is moving in. The artist collective cofounded by choreographer Benjamin Millepied in 2012 is partnering with the revamped space for a series of performances beginning February 20. Inside the Theatre at Ace Hotel, the contemporary will meet the classic—literally. The venue was formerly the United Artists Theatre, built in 1927 on South Broadway, which is now part of the historic theater district. It’s said that UA cofounder Mary Pickford’s interest in Spanish castles and cathedrals inspired the design of the ornate, Spanish-style structure. Now, as another Hollywood personality enters its doors (Millepied was the choreographer of the 2010 thriller Black Swan; his wife is the actress Natalie Portman), there’s a chance for reinvention—and some redemption.

L.A. Dance Project debuted two years ago at Disney Hall, and Millepied was determined to bring dance back to the city center (helping supplement the Music Center’s roster of international troupes). “It feels like the right time for L.A.,” he said at the time. “It’s liberating to do my own choreography, and I love the atmosphere, the light, and the visual landscape here.” But when he was named incoming director of the Paris Opera Ballet in early 2013, folks were left disappointed; his L.A. endeavor didn’t seem to stand a chance. LADP in fact drifted from Los Angeles last year, accepting engagements across the country as well as in Paris, London, Amsterdam, and Istanbul.

LADP’s return to downtown with this week’s Ace program is a promising sign. Millepied, who is 36 and a onetime principal dancer with New York City Ballet, will remain involved even as he’ll begin full-time duties with the Paris Opera Ballet in November. “We built something special, and I have no intention of leaving it,” he says. “Quite the contrary. We’re going to grow the company little by little.”

There are now eight dancers (up from six when LADP debuted). The spring residency at the Ace theater will feature the U.S. premieres of Reflections, choreographed by Millepied with music by David Lang and visual concepts by Barbara Kruger, and Murder Ballads, by Justin Peck with music by Bryce Dessner of the National and visual concepts by Sterling Ruby. There will also be a “sneak-peek” of a piece by Hiroaki Umeda, the Tokyo-based choreographer and video artist.

Stay tuned for an LADP fall program, too. “Galleries, bookstores, restaurants—downtown really feels like a place where a cultural institution can gather and form a central hub,” Millepied says. “I love being part of it. With the proportions of the stage and the sight lines, the Ace theater is a great space for dance. The Dorothy Chandler Pavilion is huge, Disney Hall is a symphonic hall. There are not a lot of theaters for dance, and I think we have one now.”