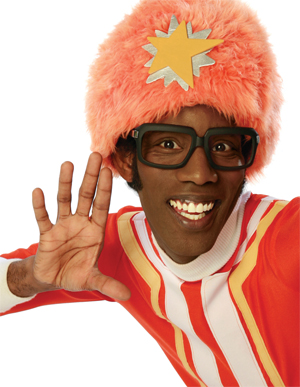 At the Skirball Cultural Center this brisk Sunday morning, the organizers of Milk+Bookies’ Storytime Celebration have assembled a star-studded lineup: Actors Rainn Wilson and Jennifer Garner, Lost cocreator J.J. Abrams, and Foo Fighters front man Dave Grohl take the stage to encourage parents to donate books to needy children. But the biggest celebrity in attendance (that is, if you ask the under-five set) is a gangly six-foot man in a bright orange tracksuit, faux-fur conical cap, and chunky mid-’80s hip-hop glasses: Lance Robertson, aka DJ Lance Rock, who is the host of Nick Jr.’s smash cable series Yo Gabba Gabba!

“My name’s Lance,” Robertson says in a clear, ebullient voice that has charmed preschoolers from here to Tel Aviv. A toddler hides behind his mother’s leg, amazed at the sight of his TV pal, who can bring to life a boom box full of creatures with names like Toodee and Muno with the magic words “Yo Gabba Gabba!”

“Hey, what’s your name?” Robertson asks the boy. “Hey, will you give me a high five? You going to leave me hanging?” When the child hesitates, Robertson is reassuring: “It’s OK. I can be shy sometimes, too. I’ll get a high five next time.”

As Yo Gabba Gabba! enters its third season this month, the 45-year-old Robertson has become a late-blooming phenomenon. The kids’ show, created by Southern California rockers Christian Jacobs of the Aquabats and Scott Schultz of Majestic, covers such familiar toddler territory as friendship, nutrition, and bugs. But it also speaks to many adults whose hipster days may not be behind them. Indie rock mainstays Weezer, MGMT, and the Shins have appeared as DJ Lance’s Super Music Friends, after whose performances the host unfailingly observes, “Listening and dancing to music is awesome!” Guest stars have included Jack Black and Elijah Wood, and upcoming episodes feature potty-mouthed comedian Sarah Silverman (who drops in on Gabbaland as a mime instructor) and irascible celebrity chef Anthony Bourdain (who makes a house call as a kindly doctor). Last Halloween paparazzi snapped photos of Brad Pitt trick-or-treating with his kids in a DJ Lance getup. “That was really cool,” Robertson says. “To his kids he’s just a parent.”

The son of a career army sergeant, Robertson was raised in St. Louis and grew up listening to his father’s blues albums and his mother’s Miles Davis and Fifth Dimension LPs. At 29 he came to L.A. to seek a broader audience for his own music (he plays keyboards and writes songs). He DJ’ed around town and eventually landed a job as a clerk at Amoeba Music. With his band, the Ray Makers, he cut a couple of CDs. “We were very electronic,” he says. “Kind of melodic but a little more rhythmic and a little more funky, too—and a little psychedelic. There were all these different textures. We thought we would have a bigger forum, but unfortunately some people weren’t so open-minded.”

The Ray Makers played gigs with Majestic, and Schultz was struck by Robertson’s onstage charisma. The next year, when Schultz and Jacobs began developing a kids’ TV program with indie sensibilities—an antidote to the banal fare they were forced to watch with their own young children—they found themselves in need of a host. Schultz knew just the guy and took Jacobs on a fact-finding mission to Amoeba. One glimpse of the clerk with the outsize Afro and striped pants and Jacobs was sold. Originally the creators had in mind a Willy Wonka waistcoat for the host, but Robertson advocated for an orange tracksuit with Logan’s Run-meets-Tron overtones—a garment that’s on its way to achieving the iconic status of Captain Kangaroo’s red blazer or Mr. Rogers’s cardigan.

The doors of the Skirball’s greenroom swing open into the reading area, and Robertson is greeted with thunderous cheers and squeals. The host grins at a room full of fans perched on blue beanbag chairs. He can’t see the parents and kids that well—Robertson is nearsighted, and his glasses lack lenses lest they reflect the television lights—but he can clearly feel the love. “Hello, friends,” he calls out. “You know what to say. Can you say it with me? Yoooo Gaaaabba Gaaaabba!”

Robertson is pleased that for now his core audience doesn’t regard him as a celebrity. “When I grew up thinking about Captain Kangaroo,” he says, “I didn’t think he was famous. I thought, ‘Oh, it’s Captain Kangaroo, and he’s talking to me.’” DJ Lance has never consented to an interview before and probably won’t be doing too many in the future. He doesn’t want to be considered larger than the show. “Mr. Rogers wasn’t out there doing interviews,” he says, “and you can see the legacy he has.”

Back in the greenroom Robertson meets Grohl and his family. He gives the Foo Fighter’s daughter Violet a high five, his long, delicate hands moving so fluidly, they could have been drawn by animators. He promises to bring along a Yo Gabba Gabba! gift for her when he sees her dad at the Coachella music festival, where DJ Lance will be performing in character as part of a three-day lineup that includes Jay-Z, Phoenix, the Specials, and Thom Yorke of Radiohead. Robertson’s calendar is packed: A Yo Gabba Gabba! live act is touring the United States and Canada. At the Silent Movie Theatre on Fairfax, Robertson and the Yo Gabba Gabba! animation producer will be curating a month of rare children’s television that’s heavy on Sid and Marty Krofft, who inspired the show’s look. Also in the works is the first Yo Gabba Gabba! feature film, which Up in the Air director Jason Reitman is developing with the show’s creators.

“I watch your show with my nephew all the time,” Hill blurts out.

Robertson agrees to a picture. Hill hands his iPhone to his companion, then runs his fingers through his hair and sidles up to DJ Lance. “I’m going to be so cool, like, in an hour,” Hill says. “I swear to God!”