Home Uncategorized Here’s Why You Should Check out Dawes Tonight 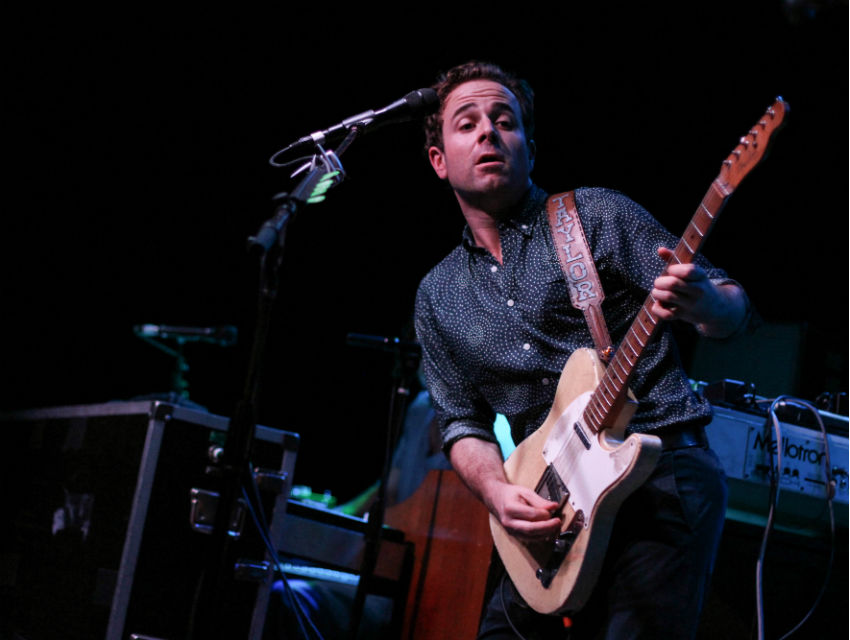 After the show, Dawes lead singer Taylor Goldsmith is nowhere to be found. Up in a Southern California green room last October, he is strumming a guitar and hashing out new material with Dave Rawlings, despite the fact that Dawes just finished a show minutes earlier. On that tour, it wasn’t unusual to get right back to work before the amps had even cooled, tearing a song apart line by line until it felt right.

Later, a trip to Rawlings’ Nashville studio with the rest of the band—drummer Griffin Goldsmith, keyboardist Tay Strathairn, and bassist Wylie Gelber—yielded their fourth album All Your Favorite Bands, which is out today. They play Hollywood Forever tonight.

All Your Favorite Bands is a reaffirmation of the folk-rocker band’s strengths: musically and lyrically well crafted, intelligent, and smooth songwriting. Dawes has only gotten better at sounding like Dawes, which isn’t a bad thing because theirs is a refreshing sound. Start to finish, this album may feel a little homogeneous at times if you’re not listening closely, but there are plenty of moments—lines, phrases, licks—that stick with you after just one listen. After a few listens, it feels like this could be their best yet.

The album’s central line, “I hope all your favorite bands stay together,” is one of those moments, and the exact sort of authenticity that makes Dawes great. It’s not just a fitting sentiment for a musician to express to someone; it’s one of the nicest things you can say to a friend at all, a sincere acknowledgement that even such small things are important to who we are.

Well-wishes like those and preceding lines “I hope life without a chaperone is what you thought it’d be / I hope your brother’s El Camino runs forever” make it easy to see the album as a lover’s sendoff, but Goldsmith says it’s actually not so specific.

“It doesn’t have to be to a girl or a lover, it’s just a contemplation of a certain way to look at life,” lead singer Taylor Goldsmith explains. “A lot of songs do deal with matters of the heart but especially with ‘All Your Favorite Bands,’ it was important that it felt like a song you could sing to your brother’s high school graduation.”

It’s a nostalgic theme Goldsmith has written well on previous records, too. The main difference with All Your Favorite Bands, though, is that it captures Dawes in their element—live.

“On paper, that sounded a lot scarier, or at least a lot harder,” Goldsmith says. “It actually was a lot easier and felt more natural. What surprised me was that it taught me a lot about us and me as a player—thinking on your feet, reading a situation, playing much more than learning a part. That’s always been a lot more foreign to me.”

After laying down a track, the band didn’t listen to the takes right away. That process was in the care of producer David Rawlings (Gillian Welch, Old Crow Medicine Show), who urged them to keep rolling while in their element, instead of stopping to listen to takes.

Every week or so, the band had a day off while Rawlings, an accomplished guitarist and deeply knowledgeable songwriter himself, would cut the tape and put together an edit. By the time the band heard it, it would already be done—no poring over which solo section was the best or which second chorus sounded better.

“We would just let him show us,” Goldsmith says. “It was not only convenient, it was freeing. It allowed us to play in a different way. There was no longer this concern with ‘Oh, I hope we capture this thing he played.’ With this, it was, ‘OK, here goes nothing.’ We were much more loose and free and having a much better time.”

“You have to have that trust in your producer,” adds Strathairn, “You may not see exactly eye to eye, of course, but you knew the essence of what Dave was capturing was something we were going to relate with. His ears are so amazing.”

Recording this way allows for jagged edges and emotional peaks that don’t appear on previous Dawes albums. “I don’t know what else that you want me to say to you / Things happen, that’s all they ever do,” Goldsmith belts near the end of the album’s opener. It’s exciting to hear him cut loose, and the entire band’s instrumentals follow suit. Album closer “Now That It’s Too Late, Maria” clocks in at nearly 10 minutes, recorded in one take.

“That’s a very much a love song. If we edited the vocals, if we had strings and a dramatic arrangement, I think it would’ve made for a whole different emotion,” Goldsmith says. “When it sounds like a band goofing with each other and enjoying themselves, it allows a juxtaposition that makes it work.”