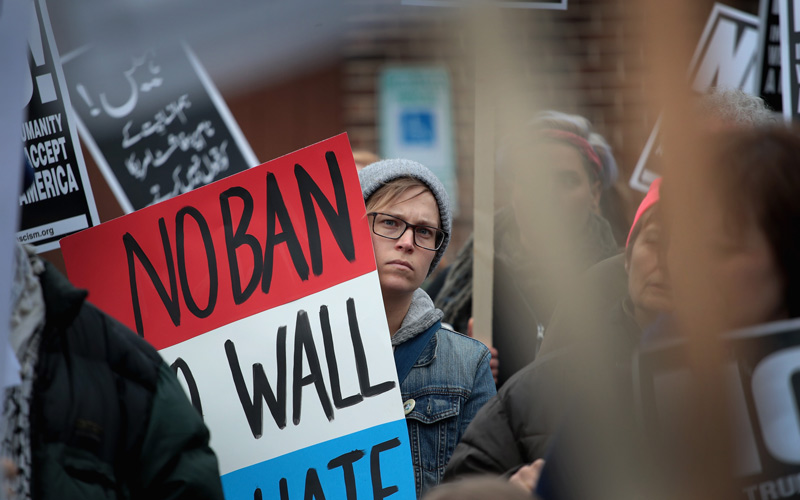 Aaaaand we’re back. This morning President/erratic speller Donald Trump signed the Paul Blart: Mall Cop 2 of travel bans (as in, we didn’t want or need the first one, and we certainly didn’t ask for a second). Though this ban is less extreme than the last iteration, it fails to take into account the fact that no one from any of these countries has committed a terrorist attack on our soil since 2001. Here’s a breakdown of how the new ban compares to the old one.

What stays the same?

• Travellers from Iran, Somalia, Sudan, Libya, Yemen, and Syria are banned for 90 days as before, with a few exceptions (below).

• There’s still a 120-day ban on refugees. After that the government will decide who—if anyone—they’ll start letting in under a new “extreme vetting” process. Because, you know, it’s not like we already have on of those in place.

• Case-by-case exemptions can be made for certain refugees.

• Iraq is no longer on the banned list—though, according to the New York Times, Iraqi travellers will still face “additional scrutiny.” As it turns out, Iraq has actually been pretty helpful in fighting ISIS, and the Iraqi government has now promised to be extra-cooperative when it comes to helping the U.S. vet visa applicants.

• The ban will go into effect on March 16, rather than immediately, to allow for more a careful rollout.

• Anyone who currently has a non-immigrant visa (like students or temporary workers) is now free to enter the country within the limitations of their visa.

• Green card holders are guaranteed entry, as are dual nationals with a passport from a non-banned country.

• No special exceptions will be made for Christians or members of other minority religious groups.

• Syrian refugees are no longer banned indefinitely, but are now included under the blanket 120-day refugee ban.