Home L.A. On Screen Here’s Where to Find All of the L.A. Locations You Saw in... 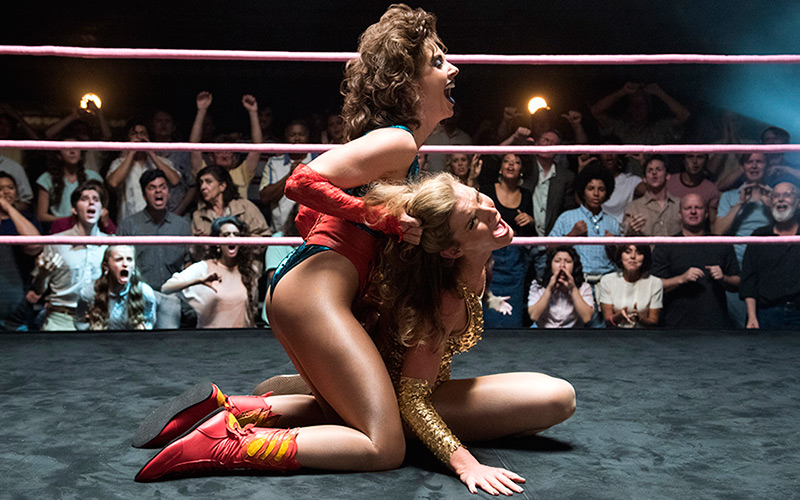 Los Angeles was a pretty spectacular place in the 1980s, and we’re not just saying that because we dedicated an entire issue to the decade. For those who missed out—or who want an excuse to re-live the era of oversized blazers and Duran Duran—Netflix’s new show GLOW might be your best bet. The original comedy series is a fictionalized account of the production of G.L.O.W.: Gorgeous Ladies of Wrestling, a cult-classic cable show about female wrestlers that aired from 1986 to 1989. Though the real-life series was shot in Las Vegas, Netflix’s version takes place in L.A. Here are 17 local spots to watch out for. (Note: Mild spoilers ahead.)

In the pilot episode, struggling actress Ruth Wilder (Alison Brie) accosts a casting director in a restroom of the Hollywood Offices building in Hollywood. The 11-story modernist structure, designed in 1968 by architect Abraham Shapiro, is known for its ties to the music industry (it was once home to both Motown Record Corp. and Columbia Artists Management Inc.) and its sweeping views of the city.

After her disastrous audition, Ruth heads to an aerobics class with her BFF Debbie (Betty Gilpin) at City Ballet of Los Angeles. Founded by Robyn Gardenhire in 2000, the Pico-Union-area dance school provides affordable movement training to underprivileged children. While aerobics classes aren’t actually offered in real life, ballet, modern dance, pointe, and yoga courses are part of the curriculum. (Glee fans: Don’t miss Heather Morris’s brief appearance in the background of the scene.)

Later on, a down-on-her-luck Ruth is robbed of both her taco and her purse by three pre-teen punks (aka the “Los Angeles Death Squad”) while in the parking lot of the now defunct El Big Taco in Van Nuys. Per Yelp reviews, the cash-only Mexican eatery served decent fare during its tenure, but was shuttered in February and is currently vacant.

Ruth attends a disappointing scene study class in the back room of L.A.’s preeminent theatre bookstore, Samuel French. Best known for publishing plays, the company opened its first Los Angeles book shop in downtown in 1929. It relocated to its current home, a charming Spanish-style building on Sunset Boulevard, in 1947.

Ruth, Debbie and their 12 GLOW castmates are indoctrinated into the world of female wrestling at Chavo’s Boxing Gym. The fictional facility was actually a mashup of of two locales; Exterior scenes were lensed on the rear side of the San Fernando Masonic Lodge, while interiors were shot at a studio-built set. Fun fact: Google Street View captured imagery of GLOW production trucks stationed in front of the building during filming. In GLOW’s second episode, “Slouch. Submit.”, Ruth and fellow wrestlers Melrose (Jackie Tohn), Carmen Wade (Britney Young) and Rhonda Richardson (Kate Nash) grab a mid-rehearsal lunch at the walk-up window of Cadillac Jack’s. The café was originally established in 1949 on the then-bustling San Fernando Road in Sun Valley. When installation of the 5 freeway curtailed traffic, the diner saw a major decline in patronage and eventually shuttered in 1989. The eatery was left intact, though, frozen-in-time in its 1949 state. Today it’s used regularly in movie shoots. The interior of Cadillac Jack’s was featured in several GLOW episodes including “Debbie Does Something,” “This Is One of Those Moments,” and “The Liberal Chokehold.” The site has also appeared in Grease 2, The O.C., MacGyver, The Rockford Files, Vanderpump Rules, Mandy Moore’s “Candy” music video, Dance Moms, and in the 2016 Netflix series Flaked. (You can read an in-depth history of the restaurant here.)

Circles On the Point Mansion

The uber-modern pad belonging to producer Sebastian ‘Bash’ Howard (Chris Lowell), where the girls party in “The Wrath of Kuntar,” is known as “Circles on the Point” in real life. The sprawling 5,805-square-foot stunner also appeared in the 1994 film Color of Night. It’s situated overlooking Point Dume in Malibu and features a pool, a hot tub, landscaped gardens, a fire pit, a gourmet kitchen, an arcade, a game room, a four-car garage, and plenty of circle motifs throughout. (House robot and butler are not included.)

In the ’80s, the G.L.O.W. cast was put up at the Riviera hotel in Las Vegas during the production of their variety show. In the Netflix version, the wrestlers are sent to the Valley to bunk at the Dusty Spur. Filming actually occurred at the Pink Motel, which sits adjacent to Cadillac Jack’s in Sun Valley. Much of the series’ action takes place at the one-story lodging, which boasts seven rooms and a fish-shaped pool. Though the hotel is typically a bright pink color (hence the name), it was painted in more earthy tones.

Universal Patio Furniture in Studio City masks as Patio Town, the local outdoor furniture shop where Bash and director Sam Sylvia (Marc Maron) secure a sponsor for GLOW in the episode titled “Debbie Does Something.”

After successfully landing the Patio Land sponsorship, Sam takes Ruth and Rhonda for celebratory hamburgers at the Atwater Village outpost of Fosters Freeze. The same site had a brief onscreen stint in Pulp Fiction; it’s in front of this eatery that Butch Coolidge (Bruce Willis) hits Marsellus Wallace (Ving Rhames) with his car.

In “Debbie Does Something,” Carmen, Melrose and Debbie sneak out of the Dusty Spur in order to take Debbie to see her first wrestling match. Filming of the scene took place at American Legion Post 308 in Reseda, a military veterans’ facility that was originally established in 1928. The venue regularly hosts wrestling events in real life, too, for the Pro Wrestling Guerrilla organization.

Hoping to learn more about Russian culture in order to improve her role as Zoya the Destroyer, Ruth accompanies Dusty Spur motel manager Gregory (Ravil Isyanov) to a party for his teenage cousin’s bris in “This Is One of Those Moments.” The celebration scene was filmed at the incredibly ornate Regency Event Venue in Glendale. The ballroom underwent a change in ownership post-filming and today looks much less opulent than it did onscreen in GLOW, thanks to a paint job that covered the space’s spectacular gold detailing.

Determined to master the ins and outs of wrestling, Ruth and Debbie head to Carmen’s house, a fabulous 1890 Victorian in Pico-Union, for some backyard lessons from Carmen’s brothers in “Live Studio Audience.”

In “Maybe It’s All the Disco,” Ruth and Sam scout The Mayan, one of downtown L.A.’s most unique and elaborate theaters, as a possible location to shoot GLOW. The Pre-Columbian Revival-style property was designed by the Morgan, Walls & Clements architecture firm for oil tycoon Edward L. Doheny. The site’s rich interior, which boasts intricate detailing, cast-concrete ornamentation, a chandelier modeled after an Aztec calendar, and a gilded curtain, more closely resembles a mystical movie set than an events venue. (As Ruth says, “The place looked great in Indiana Jones and the Temple of Doom.”) The Mayan stopped operating as a theater in 1989 and today is utilized as a nightclub and popular filming location, appearing in such productions as Playing by Heart, The Bodyguard, A Night at the Roxbury, The Replacement Killers and Rock ‘n’ Roll High School. The fantasy wrestling sequence from GLOW’s pilot episode was also shot there.

Though Sheila the She Wolf (Gayle Rankin) doesn’t “trust shoes that move,” the women decide to throw Sheila a birthday party at Moonlight Rollerway in Glendale in “Maybe It’s All the Disco.” The rink was originally built as an airplane parts production plant in 1940. Transformed into a roller-skating venue in 1956, the place is still going strong today and retains its original maple wood flooring. Moonlight Rollerway’s retro aura has long appealed to location scouts who have used the place in such productions as Cold Case, Parenthood, The Goldbergs, Glee, Van Wilder, and Jessica Simpson’s “A Public Affair” music video.

Hoping to raise the $9,000 needed to finish production on GLOW, the women head to a charity event at the home of Bash’s mother, Birdie Howard (Elizabeth Perkins), and pretend to be recovering addicts speaking on behalf of W.A.D.—Wrestlers Against Drugs. Fans of retro TV should recognize Birdie’s massive residence thanks to its weekly appearance as the Governor’s Mansion on the popular 1979 sitcom Benson. In real life, the Classical Revival-style property is known as the “Bundy House,” named in honor of its original owner, Harlow E. Bundy. Both the interior and exterior of the palatial 10-bedroom, 10-bath, 15,878-square-foot, 1914 manse were utilized in GLOW. The pad has also popped up onscreen in such productions as Scandal, Columbo, Monster-in-Law, Mad Men, and True Blood.

Thanks to Birdie, Sam and Bash finally secure a location to shoot GLOW—the Howard Family Ballroom at the fictional The Hayworth hotel—and the taping goes off without a hitch in the series finale. Filming of the episode took place at the Hollywood Palladium, the iconic Streamline Moderne venue built by former L.A. Times publisher Norman Chandler in 1940. Designed by Gordon Kaufmann, the site, which is listed on the National Register of Historic Places, underwent a yearlong renovation in 2008 and still retains much of its original Art Deco detailing. Though only the interior of the former dance hall was featured in GLOW, the exterior did make an appearance as the movie theater where Sheila and Melrose convince patrons to forgo seeing Back to the Future in order to attend the taping of their show. GLOW is hardly the first production to feature the Hollywood Palladium. The venue also popped up in Day of the Locust, The Blues Brothers, Million Dollar Baby, Almost Famous, Galaxy Quest, and Feud.