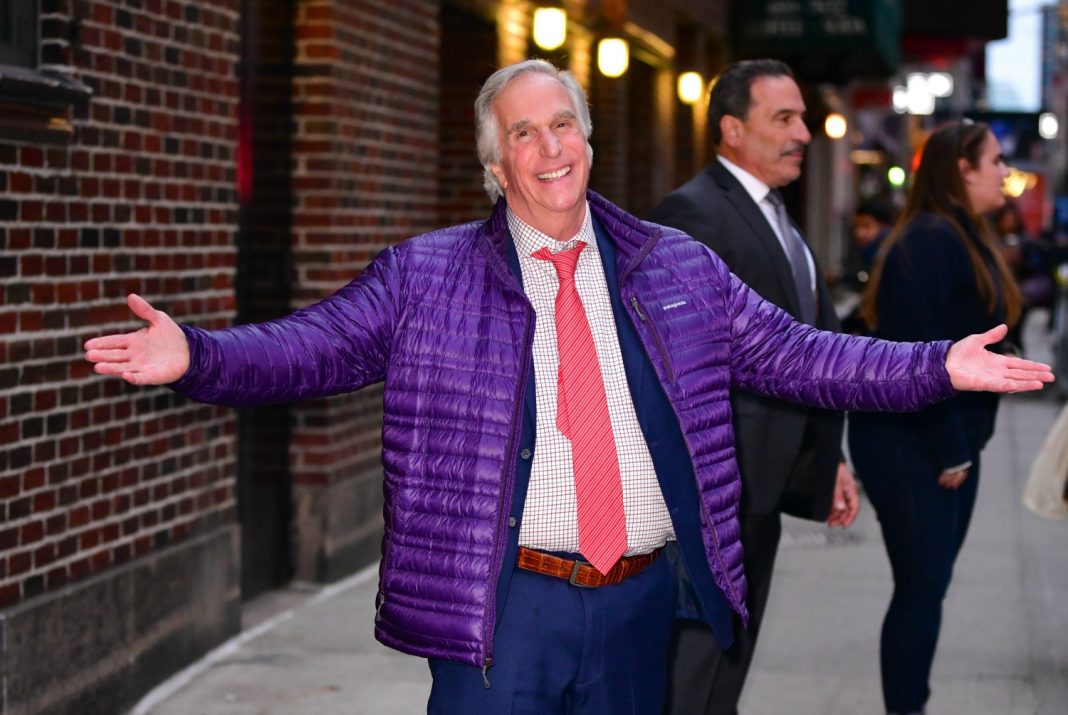 On a recent episode of the hit HBO tragicomedy Barry, acting coach Gene Cousineau—played with panache by Henry Winkler—wore a lavender tie that fit right in with his showbiz-casual wardrobe.

For Winkler, who won an Emmy for the co-starring role, that tie was a lot more than just another prop. It had come from his personal collection, and wearing it was a nod to his late friend, mentor, and sometime boss, Garry Marshall, who passed away in 2016.

“When I’m in my class on Barry I am wearing a lavender tie,” Winkler says. “And that was a tie that [Garry’s widow] Barbara Marshall gave me. That was part of Garry’s collection. I miss him every day.”

In 1974, Marshall had cast a nearly unknown Winkler as Arthur “Fonzie” Fonzarelli on the 1950s-set comedy Happy Days, which became a ratings blockbuster and made Winkler an overnight sensation.

He’s had his ups and downs since, but at age 73, Winkler is enjoying a career renaissance. On June 30, he was awarded Bill Rosendahl Public Service Award, presented by the Los Angeles Press Club at the 61st Southern California Journalism Awards, held at the Millennium Biltmore Hotel.

In an interview afterward, he said that wearing that tie was a tip of the hat to what he learned from Marshall, which helped him get to this point in his career. “He was my Don,” Winkler says. “He taught me how to be on a set. He taught me how to be an executive producer. He was incredibly supportive of me.”

Marshall was one of the first people Winkler told when he learned he suffered from dyslexia during in his fourth season on Happy Days. Winkler was 31, but it had only been recognized when his son was got the same diagnosis from a doctor.

“He never made mention of it,” Winkler recalls. “I did my work. I worked as hard as I possibly could. He deeply appreciated that, but I don’t remember having a conversation about the fact it was difficult for me. There were no accommodations made. I got the script over the weekend. I went over and over it. As I figured out what was going on in my mind, I got smoother at reading around the table on Monday mornings when we read for the producers, director and crew.”

Without Winkler asking, Marshall created an episode of Happy Days the following season addressing Fonzie’s learning disabilities. In the episode, Fonzie goes to the library to take out a book for the first time.

“I took out Call Of The Wild by Jack London,” recalls Winkler of the storyline. “I wanted to badly to read it. I wanted so badly [in real life] to read the books that I took home from the library in my neighborhood in New York. And I just couldn’t.”

Winkler never thought he might actually write a book, but now in addition to his credits acting, producing, writing, and directing, he is co-author (with Lin Oliver) of 34 books for elementary school children, with more coming. The series speaks to the special issues faced by children with learning disabilities. In Marshall’s tradition, Winkler uses comedy to provide what he calls “a direct line to the reluctant reader.”

Garry Marshall recognized Winkler’s ability, launching an iconic Hollywood career. That lavender tie was a way for Winkler to remember who got him here.

RELATED: How a New Batch of Apps Is Boosting the Profiles—and Fortunes—of Unlikely Celebs