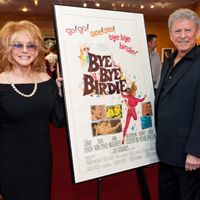 Share
Email
Facebook
Twitter
Pinterest
ReddIt
The Academy of Motion Picture Arts and Sciences held a wonderful screening last week of a newly restored version of Bye Bye Birdie (1963). There was a Q&A with the film’s stars Ann-Margret and Bobby Rydell after the peppy pic. It’s cliché but I gotta say it: A good time was truly had by all. While waiting for the red curtains to part, they screened behind the scenes footage (never before seen, actually) shot by one of the dancer’s mothers and of Alfred Hitchcock and Gregory Peck wandering onto the Universal backlot set. Rydell and Margret bantered back and forth following the film (they speak to one another on the phone almost weekly since they shot it) and Rydell joked about his singing then and now, “Back then, they threw bras and stuff onstage. Now they throw Depends,” he said. Margret admonished him with, “Be nice. We’re at the Academy.” Program host Stephen Farber (REEL TALK/The Hollywood Reporter) tried to get an Elvis question in but Margret simply said, “You know Steve. I never, ever talk about him.” If you get a chance to see this restored version (a DVD with new extras perhaps?) take it. Screw Xanax, I know walking out of the theatre that everyone was in a better mood than they were on their way in. It’s a film like Singing In The Rain; it simply makes you forget your troubles and feel better. The Academy is swimming in icons this month and tomorrow there is a tribute to Sophia Loren with clips and onstage conversations. Viva Italia!