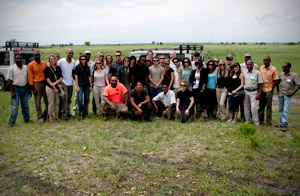 I come from the school of thought that any publicity—for a good cause—is good publicity, but there’s something undeniably icky about less-than-informed It guys and girls self-consciously name dropping the latest cause célèbre on the red carpet. When Lindsay Lohan tweets “Over 40 Children saved so far…… Within one day’s work…” about a December raid which rescued trafficked children in New Delhi that she did not participate in, you know that raising awareness is having a moment.?

That’s why Summit on the Summit: Kilimanjaro, the week-long trek up Africa’s highest peak organized by philanthropist-musician Kenna to bring attention to the global clean water crisis, caught mine. Jessica Biel, Lupe Fiasco, Isabel Lucas, Emile Hirsch, Elizabeth Gore, Kick Kennedy, and others are making the notoriously difficult climb, which is being filmed for a documentary that will air on MTV on March 14. It’s so far from Hollywood. It’s so unglamorous. It’s so extreme. The most interesting part? Summit on the Summit’s Web site, where you can virtually follow the team and track their individual heart rates, altitudes, O2 levels, and grades—along with the current weather conditions. A recent check shows the group is at almost 15,000 feet. For these celebrities—and in particular Biel and Hirsch, who tend to guard their personal lives from the press—the journey is clearly an act of passion. For us, it’s unusually inspirational “celebreality.”