Home Uncategorized He Hasn’t Worn Underwear Since the ’80s: 8 Fun Facts About Austin... 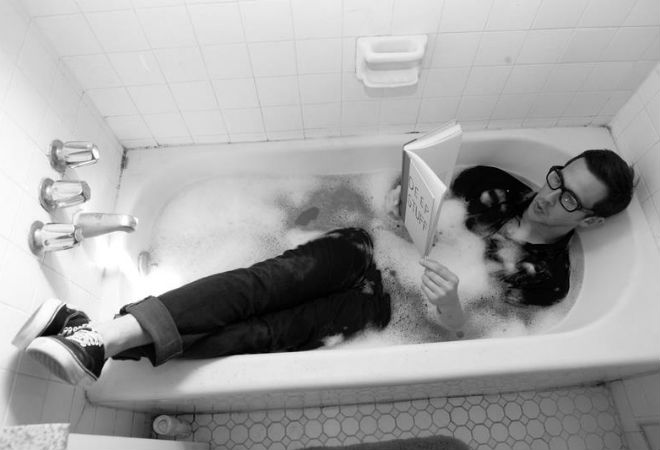 Broken Anchor was a turning point for Austin Hartley-Leonard. The Chicago-born, classically trained cellist performed solo as a singer and songwriter for years, but by age 30, alcoholism forced him to reexamine his life. Finding it hard to connect with his old material, he made a break with his past. Instead he began working with producer Brad Gordon, whom he had met through mutual friends, on a different set of songs. They weren’t planning on writing more than two or three tracks together at Gordon’s home studio in Echo Park, but it turned into eleven in no time. With that Broken Anchor was born. Armed with an arsenal of instruments and electronic music equipment, what Hartley-Leonard refers to as a “simple setup,” Broken Anchor is ready to hit the road with a handful of intimate rock n’ roll songs both melancholy and boisterous. Broken Anchor will be performing live in support of the new album Fresh Lemonade at El Cid this coming Thursday (9/19).

Here are eight facts we learned about Austin Hartley-Leonard and Broken Anchor.

❶ There isn’t really a poetic story behind the name Broken Anchor, Hartley-Leonard confesses. “Once Brad and I had eleven songs it was time to play a gig,” he says. ”The first song we did was called Broken Anchor Blues, so that was it. I guess you could say the name reflects my personal story in a way.”

❷ At the first Broken Anchor show, Hartley-Leonard employed a five-man backing band but eventually settled on playing shows with just himself and an occasional drummer. “I’m into a lot of electronic music and looking at DJs performing, I asked myself: ‘Why do these people get to have all the fun?’ It’s just one guy on stage with a million toys and plenty of elbow room. I like to think that I handle my live shows the way an electronic musician does now.”

❸ Who’s that kid on the cover of Fresh Lemonade holding a sign that says “Fresh Lemonade” and giving the camera a middle finger salute? It’s Hartley-Leonard’s nephew. It’s also a tongue-in-cheek image that resonates with the album’s aural universe. “There are a couple of songs that deal with darker subject matter, but I have no problem writing a snarky song about the end of a relationship. I like to write songs that people can relate to and sing along to. This isn’t a ’90s grunge album about addiction.”

❹ Collaborating with producer Brad Gordon, who has previously worked with artists such as AM & Shawn Lee and My Name Is You, has meant everything to Hartley-Leonard. He describes their relationship as one based on profound trust. “In the music industry there’s a real ‘let’s do lunch’ attitude. Everybody says, ‘trust me, trust me,’ but it’s rare that someone really has your back. I trust Brad artistically and personally. His instincts as a producer are exceptional.”

❺ In his songwriting he draws on a wide range of genres for inspiration. From ’80s hardcore punk icons Minor Threat to contemporaries like experimental rapper Flying Lotus and alternative rockers Wilco. “Broken Anchor is indie rock,” he says, adding without hesitation, “I think it’s funny that most times when you ask an artist to define the thing they’ve worked on their whole life, they can’t do it.”

❻ Hartley-Leonard doesn’t have a problem labeling his creative output, although some labels should be avoided. “If I tell someone I play just “rock,” they think it sounds like Nickelback.”

❼ Broken Anchor will be touring in support of Fresh Lemonade well into 2014. “I’m not only playing club gigs but house concerts as well. It gives fans an opportunity to organize a show in their own living room if they’re ready to chip in with gas money,” Hartley-Leonard explains, saying that he loves to perform.

❽ “One time we played The Satellite, with a packed room, and in the middle of the show I split my pants down the back. I haven’t worn underwear since the 80s, so I had to tell the audience they were about to see my butt. I wanted to be cool about it like Iggy Pop, but it was really mortifying,” he says. “I was like, why did I have to give up drinking before this happened?”