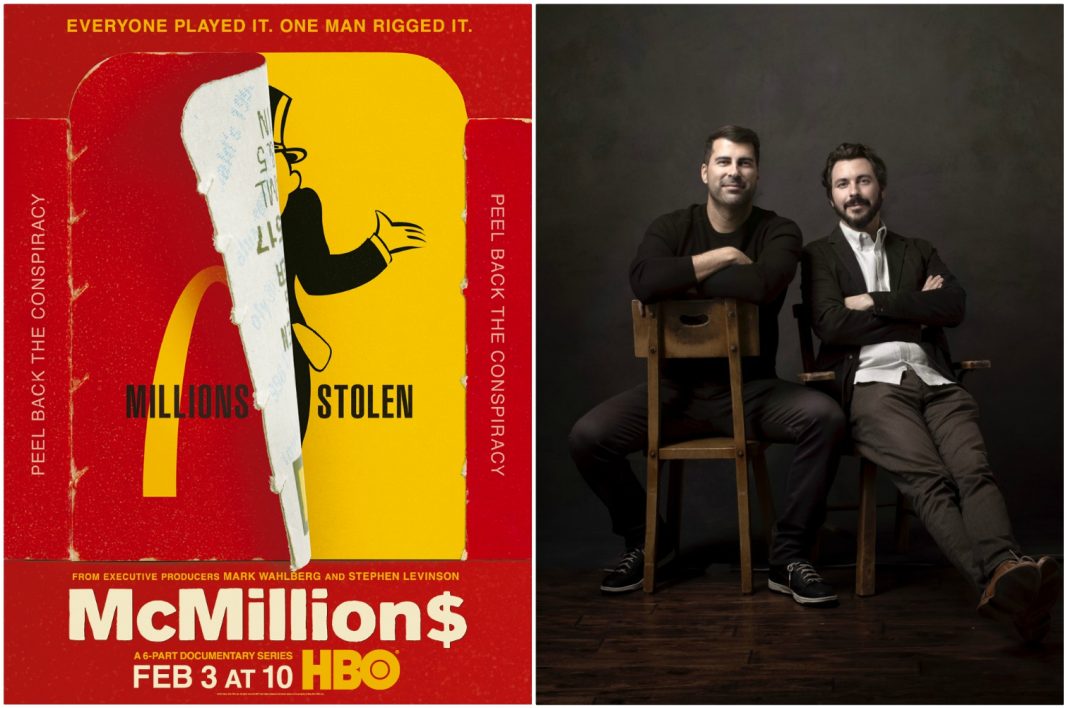 For years, McDonald’s ran a wildly popular promotional game based on Monopoly. The game involved collecting tickets stuck on fry boxes and drink cups, inspired by the pieces of property on the game’s board. It was such a hit with consumers that, at its height in the late 1990s, some McDonald’s locations saw sales spike by up to 40 percent when the game was running. And while advertisements boasted grand prizes including cars and millions of dollars in cash, it turns out that nobody actually legitimately won any of them.

When filmmaker James Lee Hernandez learned that fact in 2012, he was shocked. As he went down the rabbit hole, he discovered that, in fact, everyone who claimed to win a major prize in the game was involved in a complex fraud. That fraud was investigated by the FBI leading to multiple indictments of conspirators–indictments that came down the day before 9/11.

Because of the timing, the story largely disappeared from the news. But now Hernandez and his co-filmmaker Brian Lazarte have unearthed the scandal in McMillions, a six-part documentary series for HBO. The series is the first project from Unrealistic Ideas, a new production company from Mark Wahlberg, Stephen Levinson, and Archie Gips, focusing on “non-scripted” programming.

The docuseries, which the pair have described as “true crime meets the Cohen brothers,” unravels a complicated conspiracy involving a cast of characters that are often so hilarious and peculiar it’s easy to forget that it’s all real. We spoke with Hernandez and Lazarte about how they captured that tone and reported this nearly lost story of pop culture history.

How did you first come across this story, which really flew under the media’s radar for so long?

James Lee Hernandez: It started with me, laying in bed, looking at Reddit on my phone before falling asleep. In between all the random articles, I saw a “TIL.” “Today I learned: Nobody really won the McDonald’s Monopoly game.” I loved that game as a kid. My first job as a teen was at McDonald’s, during the time that game was going on. It was just a really small blurb in a local Jacksonville newspaper and I just needed to know more.

I looked into it, but I couldn’t really find a lot. I kept looking into it over the next year or so. Eventually, I put a Freedom of Information Act request in with the U.S. Government. That took a little over three years to go through. Once it did, I was able to find the prosecutor and agents who worked the case. I reached out to them, reached out to FBI headquarters. The agents said this was one of their favorite cases, but nobody had ever contacted them about this, and they would love to work with me on this.

When did you start to see this taking shape as a documentary series?

Brian Lazarte: We started talking about the possibility of pursuing this documentary as a feature. First you wonder, “Do we really have the characters who really warrant pursuing this as a documentary?” You wonder, “Is it really large enough of a story to fill 90 minutes?”

Very quickly it became obvious–once we started filming with the federal prosecutor and some of the agents, and had conversations with many of the “winners”–this was an enormous story. It started to grow beyond our expectations, to the point where we found ourselves struggling to see how we could fit this into a 90-minute movie. We started to imagine this as a series.

It seems like you really got lucky with some of these real-life characters and their presence on screen.

Hernandez: Yeah, we definitely did. That’s the thing about any story: how interesting are the characters? The “McDonald’s Monopoly fraud” portion of it is intriguing in itself, but if you don’t have interesting people to tell that story, it’s going to be really boring. We were lucky to have great characters on all sides.

We were especially surprised by the FBI. Everybody gets this idea from TV and movies that FBI agents are stuffy and boring, very withdrawn. Meeting people like Doug Matthews [an agent who worked the case] completely flipped that idea.

The tone of McMillions is a bit different than people might expect when they think of a “true crime” documentary. It’s very witty and fun. Was that always your vision from the outset?

Hernandez: This isn’t about a serial killer, it’s not about a massive terrorism plot, it’s not about someone wrongfully accused and locked up in prison. On its face, there’s a quirkiness to the case. Then you start to meet the characters, hear what their thought processes were, and you realize, it’s a lot like real life: it can be funny in one instant and tragic in the next. We wanted to convey that feel.

Lazarte: The tone was something we discussed a great deal. We struggled to find any other true crime series or documentary series that really straddled this tone of comedic but also very serious in the way we wanted to do. We worked with our lead editor, Jody McVeigh-Schultz, on this a lot. James and myself also edited on the series and have backgrounds in editing. This is a fun story. We wanted people to be really entertained but, at the same time, we’re raising some pointed moral questions.

About those moral questions, what are the conversations you want people to have after watching the series?

Lazarte: We’re asking if you, the viewer, would actually do something like this, remembering that what might seem like a “victimless crime” can still have consequences. You’re stealing from a major corporation, a trillion-dollar company like McDonald’s, it’s not hurting anybody, you think. But there were actually a lot of people who were hurt by this. People who claimed the prizes and were ultimately indicted, a number of people whose careers were affected. We get into that quite a bit in the later episodes of the series.

Hernandez: That’s the number one question. If someone came to you, a close friend or a family member, and told you, “I have an iron-clad way for you to win a million dollars”–you don’t have to rob anybody or kill anybody–would you do it? For a lot of people, if you’re honest with yourself, you would at least consider it. We were also interested in the idea that these people, they made a mistake. Most of them were not “career criminals,” this was the first time they ever got in trouble. Would you let something like this define the rest of your life? How would you bounce back from that?

McMillions airs on HBO starting February 3. Each week’s episode will be accompanied by a behind-the-scenes podcast featuring the filmmakers.