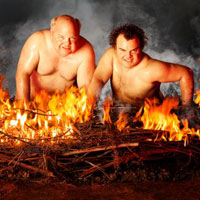 As if stumbling on a Salvador Dalí exhibition in a Woodland Hills strip mall isn’t surrel enough, October is in full swing and that means it’s time for ghost stories, pumpkin patches, fake cobwebs, the Coachella of comedy festivals, a chat with Breaking Bad’s Vince Gilligan, and more.

HEAR: Brian Wilson Plays Pet Sounds
Wouldn’t it be nice to hear the legendary Pet Sounds album performed in its entirety by the man who created it? You can find out on Sunday night when former Beach Boy Brian Wilson does just that. The surprise performance was only announced on Thursday but it should be a good one since Wilson did a trial-run in New York. More information (October 20; Greek Theatre)

RIDE: Los Angeles Haunted Hayride
Hop on a hay-filled wagon and ride through a nightmarish landscape that exploits your fears and terrors. Back for its fourth year, the trail is longer and the attraction now includes a 360-degree interactive experience, bringing the terror to all sides. Also, you will get wet. More information (October 4-31; Griffith Park)

EAT: Los Angeles Magazine’s The Food Event
This Sunday marks the return of our eighth annual Angeleno foodie bonanza. Toss on your brunchy best and romp around a Malibu ranch to check the expert seminars, live cooking demonstrations, and great eats provided by Allumette, Bestia, Cook’s County, Fig, Loteria, Sqirl, and the Hart and the Hunter, to name a few. More information (October 20; Saddlerock Ranch)

HEAR: The Writer’s Cut: Vince Gilligan
Cure your Breaking Bad hangover by joining the Library Foundation of Los Angeles to welcome Vince Gilligan for a talk about storytelling, inspiration, and the show that has made the writer world famous. More information (October 18; Central Library)

HEAR: Gary Numan
You may remember Gary Numan for the 1980s hit “Cars,” but this pioneer of electronic music has gone in a heavy industrial direction with his latest releases, perhaps inspired by his friendship with Nine Inch Nails frontman Trent Reznor. Numan, who’s now an L.A. resident, has a new record, Splinter, which came out on October 15. More information (October 18; Hollywood Forever Cemetery)

EXPERIENCE: Blackout LA
You must be at least 18 and sign a waiver to enter Blackout LA, which you’ll experience by yourself. It’s all about shock and humiliation. Unlike other haunted enterprises, where the performers don’t touch you, here they do—and they’re naked. A New York import that debuted in L.A. last year, it seems ideal for fans of the Saw and Hostel movies. More information (October 4-November 10; 940 S. Figueroa St.)

SEE: Nightmare Before Christmas
Its subject is a less frightening holiday. Still, Tim Burton’s with its tale of a pumpkinheaded Jack Skellington and his search for love, sets just the right seasonal mood. More information (October 15-November 3; El Capitan Theatre)

SEE: Peepshow Menagerie
Expect the Log Lady, the Elephant Man, and Eraserhead to bare almost all. For the latest edition of the long-running burlesque revue, David Lynch’s works get buxomed up by a crew that has sexified everything from Wagner to The Hunt for Red October. More information (October 18; Fais Do-Do)

SEE: Bettlejuice + Poltergeist
Tim Burton’s Beetlejuice and Tobe Hooper’s Poltergeist. Get your scare on in the comfort of your own car! More information (October 19; Electric Dusk Drive In)

EAT: Rising Tohoku Fair
Japan’s Tohoku region is not only the birthplace of the absurdly sweet Fuji apple, it is also home to a unique culinary style that includes everything from sweet confections to savory ramen. Mitsuwa Marketplace will be highlighting the area at the Rising Tohoku Fair, featuring Japanese-style apple pie, beef tongue bento, and tonkotsu shoyu ramen from the Sendai Takejiro noodle shop. More information (October 17-20; Mitsuwa Market)

EXPERIENCE: Invisible Cities
Wander whimsically throughout one of L.A.’s architectural gems, Union Station, amidst a stage of reality and live opera. Equipped with wireless headphones, you become both the director and audience of this innovative and experimental show. More information (October 19-November 8; Union Station)