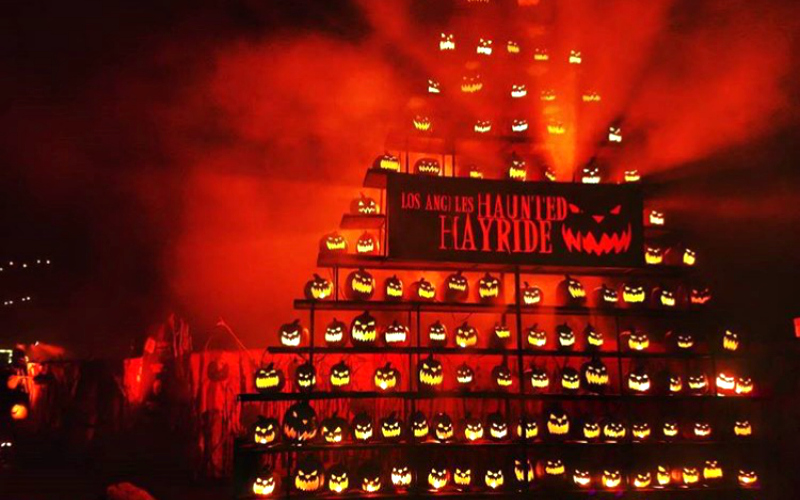 As we waited in line for the Los Angeles Haunted Hayride, the people behind us asked what they should expect. Someone told a story about how the reason it’s held at the old zoo in Griffith Park is because that area is haunted by the ghosts of all the caged animals that were killed when the zoo flooded in 1926. This story freaked them out—until they realized it was made up. Whether or not the area is really haunted, the old zoo in Griffith Park is the perfect location for the Haunted Hayride. The stone caves and enclosures where the animals used to live are weird and creepy, and when you combine that with various hellish creations–let’s say it all makes for a pretty scary ride.

The Los Angeles Haunted Hayride is like stepping inside a horror movie—a fun one, the kind where people yell at the screen. There’s an eerie soundtrack and clouds of manmade fog that make it hard to see what’s in front of you. Your first stop should be the hayride itself, because that will be the longest line of the night. The VIP line is shorter than the general admission one, but even with VIP tickets you’ll probably still have to wait.

In years past, once you settled in on the hayride, you would travel through some scary scenery, see gory monsters chase after you, and then return safely to the starting area. This year the scares take a twist, and that’s all I’ll say about that. Suffice to say, there was actual screaming.

After you survive the hayride, check out the other attractions, which include the House of Shadows dark maze, the chance to trick-or-treat through a monster-infested neighborhood, and a “grub shack” that serves punnily-named vegetarian food like “Saw-sages” and “Children of the Popcorn.”

The Los Angeles Haunted Hayride is open from 7 to 10:30 p.m. (7 p.m to midnight on Fridays and Saturdays) on select nights through Halloween night. General admission tickets are $44, and VIP tickets are $60.